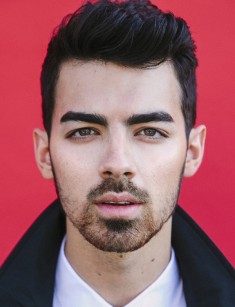 Joe Jonas is a famous American actor and a singer. Together with his brothers, he founded the "Jonas Brothers " music group in 2000. In 2009 there was shot the series about the life of the group under the title "Brothers Jonas" which was extremely successful. When the band broke apart, the singer released a couple of solo tracks. After that, he has founded "DNCE" band. The debut single of this band "Cake by the Ocean" occupied the first lines of the international music charts a week later after the release.

Joseph Adam Jonas (full name of the singer) was born on the 15th of August of 1989, in Casa Grande (USA). Later the family of the vocalist relocated to Wyckoff in New Jersey where Joe spent his childhood and youth.

The actor has three brothers - Kevin, Nick, and Frankie. The brothers have created "Jonas Brothers" group in youth. The singer’s mother, Dennis Miller, was a famous singer, and his father, Paul Kevin Jonas, was composing songs for his wife.

Three brothers - Kevin, Joe, and Nick have demonstrated their abilities in singing in childhood. They joined the church choir even though at first, he has learned to play the keyboards, the guitar, and the tambourine.

When his elder brother Kevin began his career as a musician, Joe together with Nick was supporting and helping him in everything. Kevin composed the songs, and three brothers arranged the songs together. During performances, Joe and Nick worked for their elder brother as backup vocalists.

After the brothers had recorded several successful singles, the managers of Columbia Records company noticed them. In 2005 the company concluded the contract with the guys on the condition that they would obligatory create their band. At first, the brother called themselves "Sons Of Jonas", but later they took another name - "Jonas Brothers".

In summer of 2006, there took place the release of the debut disc of brothers under the title "It's About Time" which was sold out in 50 thousand copies. Unfortunately, the label considered that it wasn't enough and that's why at the beginning of 2007 the guys broke the contract with "Columbia Records", and just a few weeks later began to cooperate with Hollywood Records label.

In summer of the same year, there was the release of the second disc with the same name as the title of boys band. The brother got crowds of devoted fans in a short time and even managed to occupy the 5th position in honorable Billboard-200charts.

In summer of 2008, the admirers of this group received an opportunity to enjoy one more album of "Jonas Brothers" under the title "A Little Bit Longer". This disc took the 1st place in Billboard- 200 charts.

Just in a year, the singers delighted their fans with their new song - "Lines, Vines and Trying Times" which also took the first position in the national charts. In spring of 2012, the band officially announced the completion of the contract with "Hollywood Records". Also, they have redeemed the rights for their singles.

In May 2010 Joe said that he was planning to record the debut album under the title "See No More". In August of 2011, the singer informed his fans about the fact that since October of that year he would perform on the warming up at the concerts of Britney Spears.

A month later there was a release of the next album - "Fastlife" which reached the 15th line in Billboard – 200 charts in the first week. In 2012 the young man pleased his admirers with a disc of "Fly With Me". In 2013 the singer together with John Legend released the new track which entered the album "Love in the Future".

In 2015 Joe found the new band - "DNCE". JinJoo Lee, Cole Whittle and Jack Lawless became the members of this music group. In September of the same year, the guys have released their first song "Cake by the Ocean" and shot the video on this composition.

The composition took the 9th line in Billboard Hot-100 chart. Moreover, the single "Cake by the Ocean" occupied the first place in Adult Top 40, the 8th position in Dance Mix Show Airplay chart and the second - in Mainstream Top 40 chart (Pop Songs). The number of the copies of the single reached 1,68 million copies.

In 2016 the first studio album of "DNCE" band appeared on the market. Both listeners and critics liked the disc.

In May 2017 the band headed by Joe released the collaboration with the singer Nicki Minaj - the song video under the title "Kissing Strangers ".

Not only beautiful young ladies but also the paparazzi were always interested in the private life of this famous vocalist. First Joe’s girlfriend was the schoolgirl Mandy (he devoted "Mandy " song to her). They had relations from 2004 till 2006. Unfortunately, their relationships had broken up when the singer began to dedicate all his free time not for his beloved, but for his tours.

Then the singer had short relations with the actresses Amanda Michalka and Camilla Belle and also a quick fling with Taylor Swift. Their love affair began in 2007, and it has lasted for a few months only. We know that the singer has composed the songs "Forever and Always ", "Last Kiss " and "Better than Revenge" basing on her relationship with Joe.

Two years later Joe was noticed together with the young beauty Demi Lovato. They performed together in the movie "Camp Rock". However, this love affair was also destined to come to an end. Though, after parting the young people stayed friends what is a rare thing for Jonas.

Practically at once the actress from "Twilight" Ashley Greene joined the long list of the singer's girlfriends. Though, after some time the young people quarreled and after this finally stopped their communication. After that, for a while, the actor was meeting the girl who wasn’t a public person. She was a model and a student of the College of Arts - Natasha Huo whom the singer had met during his holiday in Hawaii.

In 2012 the actor got acquainted with the artist and designer Blanda Eggenschwiler. Their relationship lasted till 2014. In spring of 2015 Joe lit appeared on the secular ceremonies together with the top model Gigi Hadid, and already in autumn, he announced their parting.

In 2016 in mass media there appeared the news that the singer was meeting the star of the series "Game of Thrones" - Sophie Turner (in the series she performed the role of Sansa Stark).

The gossips about their love affair appeared already at the end of October when the couple celebrated Halloween together. The rumors spread when Joe and the girl were captured kissing each other at the concert, during MTV EMA Awards. According to the information, in 2017 the young stars are still together. Paparazzi regularly take pictures of the loving couple during secular actions and their walks and in cafes.

In 2017 Joe together with "DNCE" band performs at occasions and gives concerts in different towns. For example, in October the band has sung at the opening of Westfield Century City shopping center in Los Angeles, has appeared on "World Childhood Foundation" in New York. Also, they took part in a charity concert for students of Texas Christian University in Fort Worth (Texas). We know that in December the band will open the show of the singer Bruno Mars in Colombia.

Besides, in September there was the premiere of the song "Can You Feel It" which is one of the soundtracks to the animated series "My Little Pony" was held. Also, there was released the collaboration of "DNCE" band and Rod Stewart - the lyric video on the composition by the duet under the title "Do Ya Think I’m Sexy?".

Despite his busy working schedule, the actor who is 170 cm tall remembers about his subscribers. Jonas regularly posts his photos from performances and holidays on his Instagram.

It's worth noting that his social networks are not the only source with the help of which he can tell his fans about the latest news. Different Internet portals and printing editions often publish information concerning the creative biography of the Hollywood star. 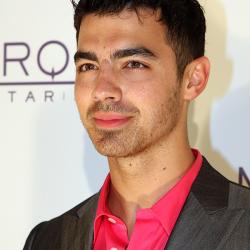