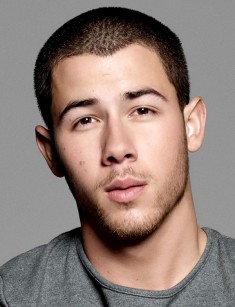 Nick Jonas is an American singer, actor, and composer. He became famous as a member of the pop rock band Jonas Brothers, which he created with his brothers Joe Jonas and Kevin Jonas.

Nicholas Jerry Jonas was born on September 16, 1992, in Dallas, in the northeastern part of Texas. Singer’s father Paul was a composer, and mother Denise was engaged in the education of sons and housekeeping. The artist has three brothers – older Joe and Kevin and younger Frankie.

At the age of 7, Nick already played on Broadway. The talented boy took part in a number of productions and also helped the artists prepare for performances. According to his father, Nick began to write music at the age of 5. Little Nicholas wrote the lyrics of the famous Christmas song "Joy To The World" ("A Christmas Prayer") at age 9.

In August 2000, Nick and his brothers played major roles in the episode of the series Hannah Montana as guest stars. The episode set the record as the most viewed video (10.7 million viewers).

A year later, the brothers starred in the comedy Camp Rock produced by Disney Channel Original Movie, where they played members of the Connect Three band. In 2010, Camp Rock 2: The Final Jam was released.

In 2011, the artist appeared in the American TV series Mr. Sunshine, which tells about Bene Donovan (Matthew Perry), an egoistic manager of second-tier sports and entertainment center, who experiences a mid-life crisis.

Ben faces many difficulties at work, and he has a lot of unresolved problems in his personal life. All these problems fall on the man’s shoulders and he does not know how to live further.

When the family of a banker settled in a neighboring house, the life of a young man turned upside down. The banker embodied everything that a young inexperienced guy thought he should strive for. The banker had a beautiful rich house, a yacht, a lot of money and a young beautiful wife.

Millionaire’s wife Lena and Doug had a love affair. Doug was overwhelmed with happiness and could not imagine that after the banker was found dead in his own house, he would be among the main suspects.

In 2005, Jonas Brothers signed a contract with Columbia Records and sang as guest artists at the concerts of Kelly Clarkson, George Michael, Backstreet Boys and The Click Five.

The first single of the band "Mandy" was released in December 2005. In February another song "Time For Me to Fly" also became the soundtrack of the film Aquamarine. The first album It's About Time was released in August 2006 in a limited edition of 50 thousand copies.

In February 2007, Jonas Brothers signed a contract with Hollywood Record. At the same time, the band released the second album Jonas Brothers. In the first week, it entered top five of the Billboard Hot 200 chart. The song "SOS" was released immediately after the release of the album, and the music video was shot.

From 2008 to 2010, the brothers recorded the albums A Little Bit Longer, Lines, Vines and Trying Times, Jonas L.A. Then they announced the split of the band. Nick has already collaborated as a solo artist with Nicki Minaj (the song "Bom Bidi Bom") and with Demi Lovato (the song "Close").

There are many rumors in the press about the personal life of the singer. However, the young man shares the details of his relationship with the girls without enthusiasm. It is known that Nick is the first boyfriend of Selena Gomez. Young stars started their relations at a young age and they did not last long.

The next girlfriend of the young man was bodacious Miley Cyrus, but the love affair finished before it even really started. The guy also dated model Olivia Culpo and singer Delta Goodrem.

Nowadays, the charismatic artist is reported to have the relationship with Demi Lovato. Nick denies everything, calling on the fans not to believe the rumors. It is worth mentioning that there was the news on the Internet that the singer married in 2016. As it turned out later, this gossip was invented by representatives of the tabloid press, which periodically cover fake marriages of pop and movie stars.

In December 2017, the release of the adventure fiction film Jumanji: Welcome to the Jungle directed by Jake Kasdan is planned. Dwayne Johnson, Kevin Hart, Jack Black and Karen Gillan starred there along with Nick.

The plot of the movie tells about four teenagers, who spend the weekend, cleaning the school cellar as punishment. The guys discover an old set-top box and launch the game of Jumanji.

After choosing avatars, four guys are transported into the game. Friends, transformed into their chosen avatars, appear in the fictional world of Jumanji in the jungle, full of fantastic animals and traps. No one knows that they are not playing the game, but Jumanji is playing with them.

The artist also participates in the filming of Chaos Walking, which will be released only in 2019. The film is a screen version of the fantastic anti-utopia by Patrick Ness about the New World, founded by a group of earthlings on another planet, where all women disappear, and men suffer from a virus that allows them to hear other people's thoughts.

It should also be mentioned that shooting in the movies does not prevent Jonas from making music. This year the singer has released the single "Home", presented a new Christmas track "Say All You Want for Christmas", written with Shania Twain (the song was included in the mini album Island - This Is Christmas). The singer also performed at the American Music Award Ceremony in Los Angeles with the song "Find You".

The artist regularly posts photos from the concerts on his Instagram. Moreover, anyone can easily find content relating to the creative biography of the star on the Internet. 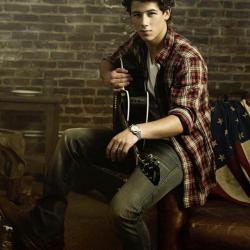