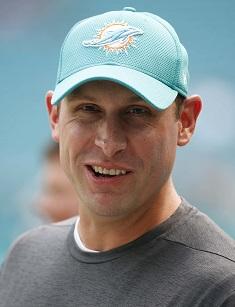 The American coach is known for his long-lasted career with various American football teams. The teams which were under his supervision had prolific seasons with high-scoring and fast-passing offense.

The quarterback guru is from Michigan. He graduated from Marshall High School and then continued his education in a college. Adam is the only child in his beautiful family. The coach is prone to keep his personal information in secret. That is why there is little information about his early years on the Internet.

He coached during 17 years and had the following cumulate stats (all positions):

As a result, Adam never played college and pro football. As an assistant of football staff the beginning coach helped with little tasks. The path to Gase's success as a professional coach started in 2000 when he began working as a defensive graduate assistant at LSU. The Tigers got 26-12 overall after winning the SEC 2001 championship.

He joined NFL in 2003 when started to work with the Detroit Lions as a scouting assistant and later as an offensive assistant. 2005 season was spectacular for Adam. As a result, the coach got a promotion. Thus he started to serve as a quality control coach in 2006. Next year was even more prolific, as Gase began to work as Lion's quarterbacks' coach.

In 2008 he joined 49ers, but the season was far from been successful both for team and Adam.

The team under his supervision started strong and had won the first six games of the season. Though it stumbled down the stretch, finishing 8-8, this was the single best season in Gase's NFL career. He had also coached his first pro bowler in wide receiver Brandon Marshall. The 2010 season saw the Broncos regress, winning only four games en route.

In 2011 John Fox became the head coach of Broncos. It was up to him who promoted Gase to the quarterback coach. Gase appeared in playoff first time in his career where Broncos lost the divisional round to the New England Patriots.

That time the team had two quarterbacks with somewhat different styles, Kyle Orton and Tim Tebow. In 2012, when the team won more games than in 2 previous combined seasons. That time Gase made a record-breaking passing season with this team. During the 2013 season as the offensive coordinator of the Denver Broncos, he coached Peyton Manning to the AP Offensive Player of the Year and Most Valuable Player. His colleagues highly appreciated his contribution to the team. Thus Peyton Manning named Adam "the smartest guy I know" in an interview.

This team took much profit by hiring the talented coach. Bears recorded 5,514 total net yards, 344.6 per game and finished 18th in total offense. The team implemented a balanced offensive attack and improved its rushing totals from No. 27 to No.11.

Despite his unfortunate first time when Dolphins lost, as a 12th coach of Dolphins, he made a spectacular season. This 2015th season was prolific for Adam and his mentees. Thus the quarterback Jay Cutler finished this season with the highest passer rating in his career.

The other player, Jeremy Langford, ended the season very impressively when he rushed 537 yards and six touchdowns.

As a head coach, his actions were criticized sometimes, especially in the questions of players' selections. Thus he got rid of Jay Ajayi; Dolphins traded the player to the Eagles. Later Jay Ajayi and his new team won Superbowl LII over the New England patriots. Ajayi couldn't help but throw shade on the work of his ex-coach Adam Gase. Ajayi wrote on his Instagram:

"THEY may have tried to discredit you, discount you, throw dirt on your name...none of it matters now. LEGACIES LAST FOREVER. Funny how they were GASsEd over journalistic...look at me now. ONLY GOD."

Adam Gase preferred running backs Kenyan Drake and Frank Gore to have an equal amount of carries each game. But fans of the team considered that Adam Gore was received more opportunities while Kenyan Drake became a second-leading receiver. Lots of people found this fact unfair, as Drake had real talent and plenty of sympathy and support from the public. Drake hadn't complained publicly about Gase's thinking, but when asked if he would change his running style as a result of that, he made clear that he would not.

But still, he remained a wise and supportive coach. After Ryan Tannehill's injury Gase couldn't conceal his disappointment. But at the same he supports the player despite ruined hopes and lost of aspiration: "The first three games he played pretty good," Gase said.

During one press conference, reporters asked him about the secret of success of 42-year-old Tom Brady who continued to play for Patriots at a high level. Gase who was 40 at that moment gave a hilarious answer:

"I don't know because I wake up and I feel like [expletive]," Gase said, via SNY. "And he's older than me just to clarify that."

Dolphins revealed Adam of his duties in 2018, and he immediately signed the contract with Dolphins' rival the New York Jets. He also was a candidate to be next coach of the Green Bay Packers.

During the conference introducing him as a new coach of Jets, Adam had a strange appearance. He had "bug eyes" and unusual reactions. He immediately became a new sports meme on the Internet and was also suspected of receiving medication or even drugs. The others said that it was a pure manifestation of being out of sorts.

Rumors have it that as a coach of Jets Gase is going to trade Le'Veon Bell as he doesn't want to spend a lot of money on running backs. The question remains open. There are a lot of theories on the Internet.

Despite all gossips, the players of Jets are inspired to work with the prominent coach. Thus Robby Anderson believes that Gase will bring him greatness:

"As a receiver, it's like gold. It's a blessing, and it's exciting because you know he has many great ideas and great things planned for me, and ways for me to execute and really show my talent," Anderson said of Gase. "I've been labeled a 'deep threat', but everybody who knows what I can do knows that's not the case. But he's really going to make me a great player, he's going to bring greatness out of me, and he's going to let me do things I haven't really been able to do and take me to that next level. And I'm confident in that."

There is some resemblance to Adam Gase and Vladimir Putin. This fact brought new popularity on Internet possibly for these persons both. Look these photos and see, he looks like Putin indeed.

Long-lasting and storied career made him one of the most successful coaches in the NFL. His net worth is not clear, but it is evident that he earned enough for his family. Coaches of the NFL get salaries about $5 million per football season.

He met his wife Jennifer in a golf tournament in Columbus in 2010. The couple registered their relationships after one year of dating. Jennifer's father gave his permission to marry his daughter after the first meeting. The couch has three daughters who were born in 2009, 2010, and 2012.

His wife is a daughter of former linebackers coach.