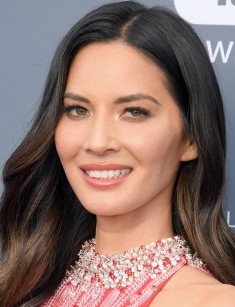 Olivia Munn has received bright appearance and numerous talents from her birth. The woman has managed to make her career in different spheres– she is a successful model as well as a journalist, and Hollywood actress.

Lisa Olivia was born in America, in the quiet and cozy Oklahoma City. Her parents have given the double name to the girl, and already at the peak of her career, the girl has left the single name. The girl has Chinese roots from her mother and German and Irish blood from her father. The girl spent her childhood in Japan where her mother's new husband was sent on the military service. They had to travel around the country, but the family mainly lived in Tokyo.

Since the early age, Olivia Munn has demonstrated her acting skills which were shaded by her unusual appearance and charm. That's why the directors of the local theaters involved her in their plays with great pleasure. And already matured girl was accepted to the circles of the model industry.

Olivia has graduated from the school in her native town: her mother divorced one more time and decided to come back to Oklahoma from Japan. Here the future actress has mastered two specialties – Journalism and the Japanese Dramatic Arts. However, she hasn't got a desire to work on the chosen specialties in her native town. The world of cinematography and television enchanted the girl, that's why she decided to try her chances in Los Angeles.

In the city of dreams, Olivia was lucky. She has received the job of the observer of the sports events on Fox TV channel. She had to become familiar with the details and peculiarities of soccer and female basketball, but as a result, the girl hasn't got engaged in this boring subject.

In the future, Munn appeared on G4 channel after she had persuaded the producers that she would cope with the major role in the show Attack of the Show. The TV crew wasn’t sure that the journalist had enough knowledge in the games, but they weren’t right. For four years Olivia has been sharing her knowledge in the game industry with the audience.

Working on the television, Olivia Munn didn't leave her dream to receive the role in the movie. And in a short time, she has received such an offer. The actress had her debut on the screens in 2004 – the girl took part in the horror picture Scarecrow Gone Wild. And in 2005 she turned into the surfer in the series Beyond the Break in which she was shooting during the next two years.

Olivia got acquainted with the Hollywood stars – Rob Schneider, David Carradine, Jennifer Morrison on the movie set of the film Big Stan. In this comedy which has become extremely famous, the beginning actress has received the episodic role. Though the role was episodic, Olivia has performed the character of bright, silly and seductive secretary Maria. After that, she has transformed into the image of the nurse of the mental hospital in the thriller Insanitarium.

The actress was showered with the invitations from the directors. The year 2010 has appeared to be fruitful for the actress. That year Munn took part in the four movies at the same time including her role in the second part of the picture Iron Man. It was real luck, as most Hollywood stars such as Robert Downey Jr., Mickey Rourke, Gwyneth Paltrow, Scarlett Johansson and other stars of cinema participated in this superheroic fighter.

Olivia Munn has been enriching her filmography promptly. The following pictures - Date Night, Super Mike, Ride Along 2and also TV series Greek and Perfect Couples were included to the actress’s assets. More skilled actors and actresses have noted the outstanding talent and skills of the girl. For example, Downey Jr. has once confessed that he has been admiring Olivia's ability to transform into different characters.

In 2016 the actress got engaged in the shootings X-Men: Apocalypse. In this movie, she received the role of Elizabeth Braddock / Psylocke – a negative character who performed in the team of the major antagonist of the movie. Due to this role, the actress has become more popular, and she began to receive more and more interesting offers from the directors. The same year Olivia Munn has joined the cast of the humorous play of Josh Gordon and Will Speck Office Christmas Party where she has brilliantly performed in a company of Jennifer Aniston and Kate McKinnon.

The actress prefers to keep her personal life in a secret. And still the press from time to time tries to disclose the secrets of her private life. The girl was meeting the Hollywood movie star - Chris Pine. Five months were enough for them to get disappointed in each other.

Then Olivia had a torrid love affair with the actor Joel Kinnaman who is known to the spectators due to his roles in the movies RoboCop and Suicide Squad. Their relationship has lasted for two years.

In 2014 the journalists were actively discussing the news that Munn had become the beloved woman of the American footballer Aaron Rodgers. The young lovers even announced their engagement, but they didn’t get married at last. In 2017 the fans have received the message about the couple’s parting.

The year 2018 was marked by the release of three pictures featuring Olivia Munn. The woman has received one of the major roles in the fighter with the elements of fantasy under the title The Predator. The movie became the sequel of the same-name pictures created in different time by John McTiernan, Stephen Hopkins, and Nimród Antal. That time the actors Boyd Holbrook, Thomas Jane, Jake Byyuzi appeared together on the movie set. Olivia has played the role of the female scientist.

The actress has received the secondary role from the directors of the crime movie Ocean's 8. This movie is the spin-off of the picture Ocean's Eleven. And, at last, Olivia has again transformed into the image of the villain Psylocke in the tape Dark Phoenix directed by Simon Kinberg.

Moreover, Olivia hasn’t given up her model and journalistic career. The editions Men's Health, Men's Edge, Playboy print the photos of the gorgeous young woman with great pleasure. In the last edition, Olivia even received the rank of the girl of the month. From time to time Munn appears on the television, takes part in the videos of the well-known musicians and writes articles to the magazines.

At the beginning of 2018, there appeared the gossips that Olivia was meeting the actor, the star of the movie Guardians of the Galaxy – Chris Pratt. In the summer of 2017 the man broke up with the actress Anna Faris after ten years of relations.

It’s natural that it was almost impossible to know about the love affair of the celebrities – Olivia kept it in secret. Paparazzi have helped the situation. The photographers had captured the stars of cinematography when they were having dinner at the restaurant. Because of these gossips, Munn had to justify before the ex-beloved woman of Chris on Instagram. The woman has addressed the message to Anna:

"I would never react to the tabloids’ rumors, but as we know each other, I want to address you in person and to tell you that there is no love affair between Chris and me. All these rumors are lies. I'm sure that you know it, or maybe it’s all the same to you. I just wanted to tell you personally that it’s a lie". 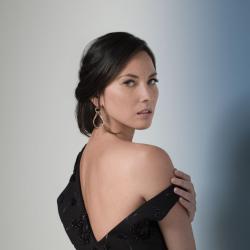