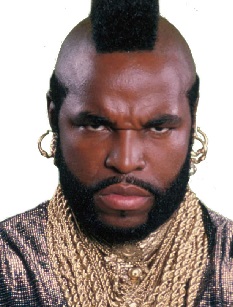 Mr.T’s real name is Laurence Tureaud. He is the native of Chicago. He was born there in 1952. Nowadays he is a famous actor, former professional wrestler, and TV show participant. He started as the bouncer and bodyguard. He became well known for his roles of Clubber Lang (Rocky III) and B. A. Baracus (The A-Team).

Mr.T’s distinctive feature is his appearance with the mohawk and an abundance of jewelry from his own collection. He is the father of three children. His net worth is about $1.5 million.

Laurence was brought up in one of Chicago’s criminal districts. He was born on May 21, 1952, in a large family. He became the youngest child among his eleven siblings (four brothers and seven sisters). When Laurence was five years old, his father left the family. Their mother was forced to bring up twelve children alone. All the family lived in a three-room apartment. Laurence’s mother kept all of them on a little benefit of $87 a month.

She was a devout woman and tried to teach children to follow the moral principles of Christians. Laurence loved his mother and didn’t want to upset her. That fact helped him not to get into criminality.

Junior Tureaud studied in Dunbar Vocational High School. He was good at behavior and not bad at studying. During the lessons, he liked to look out the window and to dream. Laurence’s older brothers advised him to go in for martial arts to learn how to protect his life.

He followed their advice and in some years became the Chicago wrestling champion. He won the tournament twice. Laurence also demonstrated high skills in American football and even won a football scholarship in one of the two land-grant universities of Texas. He studied there for a year but then was expelled.

Later Laurence was enrolled in the U.S. Army. His commanders often distinguished Laurence’s excellent service. He even got some rewards. During serving in the army, Laurence coined the nickname “Mr.T”. It was a sign of respect to his ethnic background. He had never understood what a black man had to do before he was given respect as a man.

He didn’t like that people always called him, his father, uncle or brother “a boy”. Laurence considered himself worthy of respect and called himself Mr.T. After the end of the army service, Mr.T tried to get into NFL. However, the injury of the knee didn’t allow him to become a football player.

Mr.T was good at wrestling. Those skills helped him to become a night club bouncer. His main duty was not to let drug dealers and drug addicts into the club. Also, he controlled the violence as a doorman. Mr.T liked to collect different jewelry, which the customers left behind at the night club or lost after the fights.

He was wearing all of them, and there were no brave men who tried to take their jewelry from Mr.T. In such a way, he amassed a large and expensive collection of jewelry. Later Mr.T worked as a bodyguard of Hollywood celebrities, such as Diana Ross, Michael Jackson, Steve McQueen. His salary a day was from $3,000 up to $10,000.

Once, a customer wanted Mr.T to kill a human. Of course, he refused to do it. What happened to the customer and its alleged victim was not known.

In 1980 Mr.T began taking parts in NBC-TV shows, connected to completions among the bouncers from all over the USA. He won some of them. Thanks to some successful boxing matches, Mr.T was noticed by Sylvester Stallone, who offered him to play a role of Clubber Lang in Rocky III. It was his first movie role.

Mr.T became the major antagonist of Rocky Balboa. The bouncer appeared in the movie with unusual hairstyle, which became an integral part of his image. Mr.T was sure that hairstyle could better emphasize his African origin, than heavy chains and bracelets.

Before accepting the TV series role on The A-Team, Mr.T had played some little roles of fighters in different movies. The A-Team became the second big project of Mr.T’s acting career.

He played Sergeant Bosco "B. A." Baracus, who was on the run with three other members of the U.S. government for a crime they didn't commit. The serial was shown for four years. Mr.T received wide acclaim thanks to Baracus’ role. He appeared in some other TV serials and movies. There even was released a cartoon, called Mister T.

In 1984 Mr.T released the one-hour movie, where he sang and taught children different things. For example, he advised how to dress, taught children to respect their parents and roots. He tried to teach children to be independent and to believe in themselves. He told about his difficult childhood and so on. In 1988 he became the star of T. and T.

Since early 1990s Mr.T appeared in advertising campaigns of various brands. He was involved in the promotion of Snickers, Comcast, Hitachi, and Toyota. In 1995 he was diagnosed with T-cell lymphoma, that’s why Mr.T reduced his participation in TV shows and movies.

At the pick of popularity, in the middle 1980s, Mr.T became the member of World Wrestling Federation's (WWF). In 1985 he won his first WrestleMania in the Hulk Hogan’s team. The other wrestlers didn’t like Mr.T, because he was an actor, and he didn't pay membership fees like a professional wrestler.

He was a special WWF boxer and had some conflicts with other members of WWF. In 1989 Mr.T took part in World Class Championship Wrestling. During the 1990s he appeared on the WWF promotions like a special guest, referee, viewer, and coach. He spent some fights, and in 2014 WWE brought Mr.T to the hall of fame.

In 1971 Mr.T married Mr. T Phillys Clark, with whom he has three children. They have two daughters named Erika and Lesa, and a son is named Laurence Tureaud Jr. Mr. T has tried to keep them out of the limelight, that’s why there is few known about them. His daughter Erika became a comedian, but he wasn’t fully supportive of her career choice. Mr.T hasn’t come to any of her stand-up shows before. Mr.T doesn’t take drugs or alcohol. Unfortunately, in 1995, he was diagnosed with T-cell lymphoma. However, this disease didn’t stop him, and he is still alive.

In 2005 the former bouncer stopped wearing his jewelry. It happened so, because of Hurricane Katrina, which destroyed many human lives. He helped raise funds for hurricane victims. According to Mr.T, it is a crime to wear gold and jewelry, when some people don’t have clothes and homes. In 2014 Mr.T surprised his legion of fans around the world after revealing he was fascinated by the sport of curling, and impressed by the “finesse” it required. He explained his sudden interest in the Winter Olympic event and finished some of his posts with the hashtag “curlingiscoolfool” - a reference to his “I pity the fool” catch phrase.

The lion from The Mapogo lion coalition, a former and notorious band of male lions in South Africa's Kruger National Park, was named after Mr.T. Also, the actor was mentioned several times in The Simpsons, when Homer could meet Mr.T at the mall or when he remembered that event.