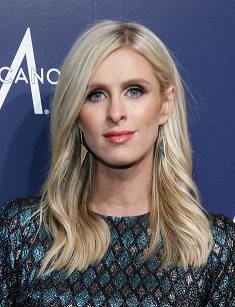 Nicky Hilton Rothschild is an American model, businesswoman, socialite and a fashion designer. Mainly, she is famous as heir of Hilton Family and her association with Rothschild family after her marriage to James Rothschild.

Although Nicky Hilton's birthplace is New York City, she was raised in Los Angeles. Future celebrity was born on October 5, 1983, to the family of Richard Hilton, a hotel heir of the Hilton family who works as a businessman in real estate and Kathy Hilton (née Avanzino). Interestingly, her mother is a former actress and half-sister of Kim and Kyle Richards. Hilton was named in honor of her great-uncle Conrad Nicholson Hilton, Jr.

Nicky was raised in an extended family of 4 children. She is the second of them and has an older sister, Paris Whitney Hilton (born 1981), and two younger brothers named Barron Nicholas Hilton II (born 1989) and Conrad Hughes Hilton III (born 1994).

Parents brought their kids up according to Roman Catholic canons. Speaking about Nicky's ancestry – she has Norwegian, German, Italian, English, Irish, and Scottish roots. She studied at Convent of the Sacred Heart, an all-girls Catholic school on the Upper East Side from which she graduated in 2001. She also attended Fashion Institute of Technology and Parsons The New School for Design but didn't finish her studies.

2004 was marked by the launching of Nicky Hilton's clothing line. Besides, she created a line of handbags for Japanese company Samantha Thavasa. In 2007 she launched her second line named Nicholai – it had a higher price policy. She also arranged the fashion show for the spring/summer 2008 season on September 9, 2007, in New York City during Mercedes-Benz Fashion Week. In 2014, Nicky Hilton started a 10-piece collection with eLuxe. Each piece was designed as a reflection of Hilton's personal style. All products got the names of the women in her family.

In 2010 Hilton presented to the world a line of jewelry. The pieces are fashion jewelry and in an Art Deco style, averaging around $200 per piece.

In 2015 the woman collaborated with Linea Pelle to create a casual capsule collection of handbags.

Two years later Nicky Hilton started collaborating with Tolani for a Mommy and Me capsule collection. The collection became available in stores in spring 2018. In 2019 Hilton, inspired by travels, elaborated a second collection with Tolani.

In 2005 Nicky Hilton and Kimberly Stewart appeared in a commercial of Australian underwear line Antz Pantz. Kimberly keeps working with the line, although Nicky has been substituted by Australian model Megan Maitland. That time, the celebrity also worked as a model for the cover of Lucire for its New Zealand and Romanian editions.

Besides, Hilton has dedicated herself to other activities. So, in 2006 she opened two Nicky O Hotels, the first in Miami and the second in Chicago. That same year, Hilton accused her partner in Federal Court in Los Angeles for damages and to seek an injunction against his use of the name. On February 12, 2007, Hilton was accused for breach of contract by her partners

In 2014 she presented to the world her first book entitled 365 Style. There readers can find advice to choose their own style and learn how to enjoy fashion every day of the year.

In 2015 the woman started partnering with Smashbox, the cosmetic brand owned by Estée Lauder Companies. Together, they launched a cosmetic line including three limited-edition cat-inspired makeup kits (one for each of her favorite cities: New York City, Los Angeles, and London).

Nicky Hilton’s net worth is evaluated at $20 million. The woman has a big collection of expensive bags, majorly of Chanel ones.

In her life, Nicky Hilton has done some charity work. So, she supports such charitable organizations as Starlight Children's Foundation, Make-a-wish Foundation, Race to Erase MS and Union Rescue Mission.

In her life, Nicky Hilton has had two husbands. In 2004 she divorced her first partner Todd Andrew Meister.

In 2011 she met her future husband James Rothschild at the wedding of James Stunt and Petra Ecclestone. They started dating and got engaged in 2014 on vacation in Lake Como, Italy. The couple tied the knot on July 10, 2015. The ceremony of wedding took place at The Orangery in Kensington Palace Gardens in London. The main attractions of the event were the A-list celebrities, beautiful bridesmaids and her wearing lavish clothes and jewelry. Hilton wore a $77,000 Valentino wedding dress.

They honeymoon was in Botswana. The couple welcomed a daughter named Lily in 2016. Before her birth, Hilton and her husband arranged a baby shower at their house. In December 2017, they welcomed a second daughter named Teddy. In July 2018, the spouses showed their own house in New York. They decorated the apartment together and succeeded to create cosy atmosphere for their children.

Amschel Victor Rothschild’s family is a wealthy one descending from Mayer Amschel Rothschild, who established his banking business in the 1760s. He was a court Jew who created an international banking family through his five sons. James Rothschild's dad Amschel was a British billionaire entrepreneur who committed suicide 1996. He was found hanged at the Hôtel Le Bristol Paris, but there are also theories that he was actually murdered.

Earlier, Hilton has had many relationships. So, she dated Film/TV producer, David Katzenberg from 2006 to 2011. Prior to this, Hilton was romantically linked with the actor, Kevin Connolly from 2004 to 2006. Also, she was involved in relationships with such stars as Ian Somerhalder in 2004, Brian McFayden from 2002 to 2003, and Marcus Schenkenberg 2001 to 2002.

Interestingly, there is another person named Nicky Hilton – a husband of a deceased actress Elizabeth Taylor.

In 2010, after the sudden death of heiress Casey Johnson (who was Hilton’s longtime friend), Nicky Hilton was messed up with a scandal. So, Casey’s fiancee Tila Tequila said Hilton planned to kill Johnson’s dogs because of their diseases. However, all the allegations were denied.