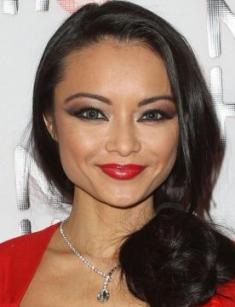 Tila Tequila is an American singer, actress, photo model, and TV personality of the Vietnamese origin.

Nguyễn Thị Thiên Thanh was born in Singapore into the family of the Vietnamese immigrants. She was the third and the youngest child in the family. When the girl turned a year, the parents moved to the United States and settled in Houston, Texas. The immigrants lived in a closed Buddhist community and left it only seven years later.

Teenage Tina was a rebel: the 13-year-old girl went to nightclubs with local gangers. This is when the pseudonym “Tila Tequila” appeared: she turned out to be allergic to alcohol.

At 16, the future celebrity ran away from the house and hitched from home to New York. When the police found her, she had to spend six months in a closed boarding school for troubled teenagers.

After the young woman graduated from school, she moved to California and met a Playboy agent. The manager liked Tila’s Asian beauty and fragile shapes (her height is 4.9 feet or 149 cm., and her weight is 97 lbs. or 44 kg.). In April 2002, her naked photos appeared in the magazine, and Tequila became the first Asian girl of the month. Later, the model appeared on covers of Maxim, Import Tuner, and Stuff; Maxim included her in the Hot 100 list twice.

Tila Tequila earned much popularity thanks to Ted Nugent’s reality show Surviving Nugent: the participants had to do extreme and dangerous tricks there. The young woman did not limit herself with one show and then appeared in Pants-Off Dance-Off and Identity; one could also see her as a guest at The War at Home.

The TV star grabbed even more attention when she became the main character of the reality show A Shot at Love with Tila Tequila. 16 straight men and 16 lesbian women competed for Tila’s passion; it was the bisexual version of The Bachelor. According to the winner of the first season, Bobby Banhart, he never saw Tequila or talked to her on the phone after the program finished. The next year, the second season of the show was released. The winner Kristy Morgan said during the show she was not going to try and date the celebrity in real life.

Apart from TV shows, Tila tried herself as an actress. She debuted in an episode of the animated comedy Robot Chicken and voiced a secondary character. The series about the cyborg chicken and superheroes living with a crazy professor was aired for nine seasons.

In 2007, the actress appeared in an episode of the comedy I Now Pronounce You Chuck & Larry about two friends, the widower Larry and the bachelor Chuck (Adam Sandler and Kevin James), who played a gay couple to receive insurance. Their game comes too far: their “relationship” is on the first page of local newspapers. Tequila personified the smiling girl in a restaurant.

In 2010, the comedy series $#*! My Dad Says followed. It is the story about straightforward and tactless Ed Goodson (William Shatner) who exhausted not only his own children but also neighbors. The crime drama Masterminds followed; the actress played a charming beauty there.

20-year-old Tila decided to take up music and started looking for a group to join; she needed to get some experience. Eventually, the celebrity created the group Beyond Betty Jean, where she wrote songs and sang. The band did not exist for a long time; soon, Tequila joined the pop group Jealousy but left quickly to begin the solo career.

The first single “I Love U” did not appear in music charts, although the sales were pretty good; the low-profile track “Stripper Friends” followed. Soon, The Sunday Team presented the artist’s debuting album Sex that was involved in a scandal. It was not about the eccentric content: the company released the disc without the singer’s permission. After long legal proceedings, Tequila lost: the album was available for sales.

In 2010, the musician changed her stage type and name: the second album Welcome to the Darkside was presented by Miss Tila and contained only three songs; the cover version on Yoko Ono John Lennon’s “Walking on Thin Ice” was the most notable track.

The same year, in August, the artist participated in the Gathering of the Juggalos festival in Illinois. As soon as the woman stepped in the stage, the angry crowd attacked her and began to throw various things at her. Tequila fell; her bodyguards did not have time to react. The celebrity described the horror on her Instagram page.

In 2015, Tila returned to music after a long break and presented the song “Drunk Dialing”. Overall, her style is a mixture of pop, electro-dance tunes, and R&B.

Tila’s participation in the bisexual romantic show was not a fake. She used to date both guys (William Baker, Sean Merryman) and girls (Courtenay Semel, the daughter of the Yahoo! CEO Terry Semel). In 2009, Tila was engaged to the heiress of Johnson & Johnson, Casey Johnson, but the woman was found dead the next month. She died of diabetes. This tragedy shocked Tequila so much that she voluntarily went to a rehab center: the star was worried about her mental health and believed she could have a suicide attempt.

In 2013, the singer dated the musician Thomas Paxton Whitaker; they split up after the young man got into financial troubles. Tila learned she was pregnant only after the break-up. Her daughter Isabella Monroe Nguyen was born in November 2014.

The celebrity had ten tattoos; she got the first one at 15. It pictured a scorpion: Tequila’s zodiac sign was the same. Tila began to smoke from 13 and quitted in 2005.

The woman continues to surprise the audience. After her daughter was born, Tequila joined the Flat Earth movement and later declared herself an alien. In 2016, she asked her fans for some money for a house, and it did not look like a joke.

Today, there is a lull in the star’s career. In 2017, she tried to made an appearance and told journalists about sexual harassment and prosecution from agents, as well as drug use. According to Tequila, prostitution was real in her life. Her ratings decreased after these statements; Internet users recommended her to undergo a rehab course.

In September 2018, the woman gave birth to her second daughter, Annabelle.