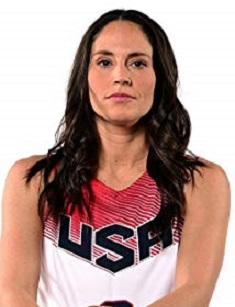 Sue Bird's birthplace is Syosset, Nassau County, New York – she was born there on October 16, 1980 to the family of Herschel and Nancy Bird. She has an older sister Jen. Through her father, Sue has Ukrainian-Jewish roots, and their original last name was Boorda. Besides, Sue Bird has Israeli citizenship. So, she is of a mixed ethnicity.

As a child, Sue became interested in sport due to her sister. She was keen on basketball, soccer, tennis and ran track. Studying in the sixth grade, Bird started playing AAU basketball. At the age of 11, the girl played during halftime of a St. John's basketball game. Due to her brilliant performance, a security guard asked for her autograph.

When it came to choosing a university to study at, Sue Bird was torn between Stanford, Vanderbilt, and UConn and eventually enrolled at the latter. In her freshman season, the sportsman got injured – she suffered a torn ACL. The next year, she returned to playing and led the squad to a 36–1 record, the Big East Championship, and the 2000 NCAA Women's Division I Basketball Tournament. In her junior year, Sue Bird’s team faced and defeated the Notre Dame. Their meeting was named the best women's basketball game ever played. Later Bird published a book Bird at the Buzzer where described the game.

Totally, Sue Bird's UConn career was closed with lots of records. So, she currently holds No. 24 on the 1,000-point list with 1,378 points, No. 2 in assists with 585, and seventh with 243 steals. Bird was inducted to the University of Connecticut women's basketball Huskies of Honor recognition program.

In 2002 Bird applied for participation in the WBA draft. There she was selected by the Seattle Storm and played alongside superstar Lauren Jackson. As a rookie, the sportsman started 32 games and made on average 14.4 points per game.

Sue Bird, Lauren Jackson, and Betty Lennox were the best franchise's players – they led the team to its first WNBA Championship. After winning the tournament, Bird was one of 11 women who had received an Olympic Gold Medal, an NCAA Championship, and a WNBA Championship.

In 2012 Bird had problems with a knee, but kept on performing. She took part in 29 matches during the regular season and in the playoffs. Later she underwent surgery and had to miss the entire 2013 season.

The next year, Bird appeared in 33 games, made on average 10.6 points and 4.6 assists per game. She was voted as a WNBA all-star that year. However, the Storm never made it to the playoffs.

In 2016 she averaged 12.8 points per game while shooting a career-high in 3-point field goal percentage and led the league in assists with 5.8 assists per fame. That time she was named to the All-WNBA First Team. That season was also successful for the Storm – the team advanced to the play-off.

In March 2017 Sue Bird had left knee surgery again, and it prevented her from visiting training camp. She came back to playing on May 21. Having faced the Washington Mystics, she made 9 points and ten assists leading her team to an 81-71 victory. On June 11, 2017, the Seattle Storm fought against the New York Liberty – Sue Bird registered 21 points and 10 assists, although it didn't save the franchise from a 94-86 loss.

In September, Bird was named the WNBA all-time leader in assists – she had a total amount of 2,600.

The match against the Washington Mystics held on July 8, 2018, brought Bird a season-high 21 points. It made her the Storm's all-time leading scorer. The same month, she was voted into the 2018 WNBA All-Star Game.

At the beginning of the 2019 season, Sue Bird had problems with knee again and was ruled out.

In her career, she has signed some endorsements deals, appeared in many TV-commercials, including American Express Commercial in 2008.

Sue Bird’s net worth is evaluated at $2 million.

Sue Bird competed USA Basketball as a member of the 2000 Jones Cup Team in Taipei, Taiwan. She was a starter of all four games and helped the team get the gold medal.

In 2002 Bird joined the national team to take part in the World Championships in Zhangjiagang, Changzhou, and Nanjing, China. Van Chancellor's coach was their coach. Sue Bird averaged 4.3 points per game. As a result, the team became a winner of all nine games.

In 2003, Bird was included in the United States 2004 Women's Olympic Basketball Team's roster. The squad eventually won the gold at the games in Athens, Greece.

In 2006, Bird took part in the World Championship held in Sao Paulo, Brazil in September. Sue Bird, Candace Parker, and Diana Taurasi replaced injured players and helped the team win eight of the nine games and get the bronze medal.

In 2008, Sue Bird appeared at the Olympics again. She was a starter of all eight matches.

In 2009 she joined the USA Basketball Women's National Team training camp and played for the 2010 FIBA World Championship and the 2012 Olympics.

The woman represented the U.S. in the 2012 Summer Olympics where brought the team their fifth straight gold medal.

In 2014 Sue performed for Team USA during the 2014 FIBA World Championship for Women, in which they defeated Spain 77–64 to win the gold medal.

2018 was marked by Sue Bird's appearance at the 2018 FIBA Women's Basketball World Cup held in Spain.

Several years ago, rumors about Sue Bird's sexual orientation appeared. Once she reposted the photo on Instagram where Nate Robinson wrote an article with the highlights 'Most WNBA players are ugly lesbians' – it evoked even more gossips.

In 2017 Sue Bird openly announced in Twitter she was a lesbian and introduced her partner Megan Rapinoe who had been in a husband and wife relationship with her fiancé Sera Cahoone before. In 2018, the two became the first same-sex couple on the cover of ESPN The Magazine's "Body Issue." The couple now are thinking about arranging a wedding.

In July, the scandal between Megan and Donald Trump occurred after she said she “would not go to the f— White House if her team wins the World Cup.’’ American media even dedicated special columns to the issue.

Remarkably, in 2002 Bird reportedly had a relationship with one of the Backstreet Boys singer Nick Carter. However, later, Sue clarified that there was nothing between them and said the reason why they were together in the award function was a publicity stunt arranged by their mutual agent.

Larry Bird, a prominent basketball player, is thought to be Sue’s relative because of a last name. However, the two are not related.

In 2019 Bird and her longtime friend Diana Taurasi was invited to the Small Talk Show.

There is a long list of Bird’s earnings for her high career stats: