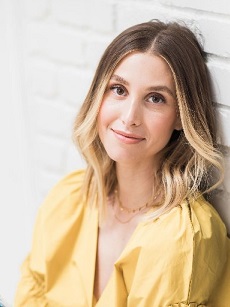 If you have ever watched shows The Hills and The City, you know this famous celebrity. Besides, she is famous for having her own line of clothes and a couple of books about personal development she has written. What else do we have to tell about the Whitney Port? Read below!

Whitney Port’s birthplace if California – he was brought up alongside four siblings (one brother and three sisters) in the family of Jeffrey and his wife named Vicki. Her family has never had financial problems – her dad was an owner of the firm named ‘Swarm’ specialized in creating clothes. Port has Jewish roots.

Once her parents were interviewed about Whitney – journalists asked when she had understood she wanted to be a TV star and launch her own clothes line. The two said that Whitney was a capricious kid – she refused from wearing ordinary, grey clothes which her relatives often gifted to her. From the very infancy, Port could spend hours doing shopping – it was important for her to choose a shirt or a dress emphasizing her personality. According to her parents, Whitney has always been inclined to the world of show-business. So, being a child, she arranged a fashion shows at their home and demonstrated her talent there.

In 2007 future celebrity completed her college education – she studied biology.

The Hills and The City

In 2006 viewers of MTV could watch a new reality show entitled The Hills. It showed daily routine of Lauren Conrad, Whitney Port, and other girls. The girls passed the audition well, having impressed show’s directors by their beauty and interesting personalities. Due to her appearance on the program, Port has received a massive base of fans. Moreover, the star was noticed by owners of Teen Vogue. As a result, she was hired as a fashion journalist working there until 2008. That year the actress started acting in the series named The City – she co-starred there Olivia Palermo. The program was canceled in autumn of 2010.

In 2018 Port alongside Emma Stone appeared at the MTV Awards and announced new season of The Hills would be released in 2019.

The same year, Port was seen acting on the show Hollywood Is Like High School with Money. Apart from starring there, she contributed to its production. The celebrity took advantage of her position and promoted her fashion line on the program. Spring of 2011 was marked by publishing of Port’s debut book ever – ‘True Whit.’ There she told secrets of her life and her way to success. Besides, that year she started serving as a host of Genuine Ken.

The year 2012 brought Port a position of a judge of Britain and Ireland's Next Top Model. Her work there lasted for only one season.

In 2013 Whitney Port had to get through a horrible tragedy – her dad passed away because of kidney cancer. The man was diagnosed with the disease when Whitney was a teenager. Although he showed obvious signs of being healthy after a long period of treatment, he lost the struggle against this dangerous disease.

The same year, the celebrity got engaged with her partner named Tim Rosenman. Her engagement ring was designed by Ron Bensimon. The two started their relationship in 2012. In 2015 Whitney and Tim tied the knot. Two years later, the spouses welcomed their first kid – a son. To share interesting facts of her life and pregnancy, Whitney has created a YouTube channel.

There she published vlogs showing her daily routine, told viewers the details of her pregnancy, and shared secrets of motherhood with her viewers. Remarkably, Port’s pregnancy was a difficult one – the woman had to consult with doctors several times a week because of health problems. Moreover, there was a risk of a miscarriage, according to some sources. However, she gave birth to a healthy kid.

Tim’s sister is also related to the world of fashion, just like Whitney is.

As for Port’s ex-boyfriends, she had been romantically linked with Jay Lyon before getting acquainted with her current husband. Their relationship was public, shown on the program The City. Many people said their affair was fake, created only to gain attention to both the partners. Additionally, according to Port’s admissions, Leonardo DiCaprio had been in love with her. Ben Nemtin is also included in the list of Port’s former partners.

Port’s net worth is evaluated at $5 million.