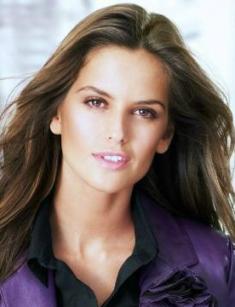 Izabel Goulart is a Brazilian supermodel and one of Victoria’s Secret Angels. She has collaborated with many fashion houses and appeared in the 2017 movie Baywatch based on the iconic series.

The woman has set an example for many people in terms of style, workout, health care, and a healthy diet.

The future runway star was born on October 23, 1984, in São Paulo, Brazil. The model has Brazilian and Italian roots. The girl grew up with five siblings.

Izabel stood out for her slim body and height since her childhood. She remembers in her interviews that peers used to make fun of her because of her long legs; they called the girl a giraffe. Goulart could hardly imagine it would become a great advantage later.

Izabel’s career began like in a movie: a woman noticed the 14-year-old beauty and invited her to a modeling agency for an audition. The teenager did not think much about it and accepted the offer; it was the right choice.

The first appearance on the runway made critics, designers, and photographers notice the slim girl. Not only her appearance was discussed, though: when the model was walking, her top fell off and made her half-naked. Surprisingly, the failure turned out to be an advantage: the young woman received many invitations for shows and photo shoots.

Many experts appreciated Izabel’s graciousness and slim body. She collaborated with Valentino, Chanel, Stella McCartney, and other fashion leaders; Vogue, Esquire, and GQ published her pictures. Soon, the Brazilian model was called one of the most attractive women in the world.

The real fame came later: in 2005, Izabel debuted as a Victoria’s Secret model and became its official Angel the next year. She was wearing the company’s lingerie until 2008; after the contract expired, her photos remained in the brand’s catalogs for a long time.

Since that time, Goulart worked as a spokesperson for many fashion leaders. In 2015, she put on the “wings” again and participated in the new Victoria’s Secret show.

In 2017, the celebrity appeared in the full-length movie Baywatch. The project received many positive reviews and starred Dwayne Johnson, Priyanka Chopra, Pamela Anderson, and other actors. The model looked equally good on the screen.

Both men and women admire Izabel’s slenderness. According to Goulart, her sizes and shapes are natural; her height is 5.84 feet (178 cm.), and her weight is 119 lbs. (54 kg.). However, the model works hard to save her beauty: she pays much attention to nutrition and does a lot of sports, such as jogging, core strengthening, swimming, and even kickboxing.

Izabel emphasizes that she has never had any diets: it is more important to eat healthily than exhaust oneself and starve. Goulart prefers fruits, vegetables, green tea, and lean meat. Besides, the young woman likes to pamper herself by smoothies and shares recipes on her Instagram.

Sometimes, the media spread the rumors about Izabel’s surgery, but she only laughs at these theories: her beauty is purely natural.

The celebrity’s life is not all about cameras and fashion shows: she organized a charity fund to help children with diabetes. The model’s brother has the same disease, so she has the first-hand knowledge of the problem and the needs of such people.

Izabel Goulart’s personal life has always been interesting for fans. The romance with the businessman Sebastian Gobbi was the first relationship the press was talking about. The couple spent three years together; the woman did not make any comments about their break-up.

The model did not confirm the speculations about her affairs. Soon, the world was talking about her new boyfriend, the Russian soccer player Diniyar Bilyaletdinov, but their union was not long-term. Soon, the actor Josh Henderson began to date the model; their split-up happened quickly, though.

The soccer player Kevin Trapp was more successful: he spent several years with Izabel. In July 2018, she posted a video of their romantic kiss on Instagram; one could see a ring with a diamond there. “Soon to be Mrs. Trapp”, she wrote.

Some fans believed that Goulart was pregnant, but she did not talk about it. Today, the happy couple is probably preparing for their wedding.

In 2018, Izabel was one of the most beautiful fans of the Brazil national team at the FIFA World Cup in Russia: she went there to support her fellow countrymen.