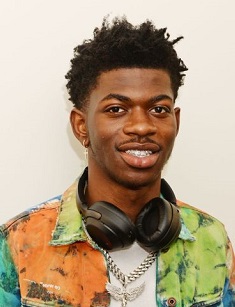 Atlanta native, Montero Lamar Hill, appeared as a big singer in 2018. He hasn’t released a lot of albums, but became a phenomenon thanks to his song “Old Town Road”. Among other popular songs are “Rodeo”, Bring U Down”, and “Panini”. In June 2019, the young rapper surprised a ton of fans by seemingly coming out as gay. Lil Nas X's net worth is currently estimated at $3 million.

Montero’s birthplace is Atlanta, Georgia. He was born there on April 9, 1999. For some time he lived in a happy family; however, at the age of six, his father left the family. That’s why in 2005, Montero and his mother were forced to move to Bankhead. Drugs and gang violence were everywhere. Hill never saw anyone close to him killed, but he knew plenty of people who did.

When Montero was nine years old, he established a relationship with his father. Soon, they settled in Austell. Hill was interested in music from an early age. As a kid, he started to play the trumpet. Graduated high school in 2017, he attended the University of West Georgia. He studied there for one year, working in different places at the same time.

In December 2018 he released his outstanding single “Old Town Road”. Lil Nas X had only $5.62 in his bank account before single took off and changed his life. Soon the track became a viral sensation, thanks in large part to countless TikTok memes. A lot of users took the Nas’s single to soundtrack their Yee Haw transformations, an online challenge in which an individual transforms into a cowboy/cowgirl.

The track started at the 83rd position on the Hot 100. Through the song’s lyrics, the rapper romanticized the cowboys’ life. The character was unfulfilled by a hedonistic life of consumerism, substance abuse, and adultery. He also had dissatisfaction with the indolence of his peers, feeling no need to heed their advice. With nothing left to believe in or follow, the rider headed out with the only destination being the open road.

In the video, the rapper and country singer were cowboys in the Wild West that traveled into the present still dressed in their country garb. Lil Nas X then proceeded to show off his horse to a very confused inner-city neighborhood before he and Cyrus hit up a bingo game at the town hall where senior citizens square danced.

On April 29, 2019, Diplo joined Lil Nas X and Billy Cyrus, and they issued new remix. To celebrate the success of their hit song the Atlanta-native surprised Billy with a red convertible Maserati.

In May Lil Nas X performed in the NHL free concert before Game 1 of the Stanley Cup Final between the Boston Bruins and St. Louis Blues. He and Chase Rice played the event, which was free, at 6 p.m. at Boston’s City Hall Plaza. The concert was a short walk from TD Garden where the Bruins and Blues played at 8 p.m. Fans without game tickets could stay and watched the game at an outdoor viewing party.

A few days later, the rapper surprised a Cleveland elementary school with a performance of his track after a video of the students jamming to the hit record went viral earlier.

"I saw y'all video, and I knew I had to come," he told the crowd of excited children before breaking into "Old Town Road."

Lil Nas gave the fifth-grade students the surprise of the lives as they went absolutely wild when he walked into their school's gymnasium to close out their talent show. The video was posted on his Instagram. It seemed like all of America has fallen in love with the controversial track, which couldn’t quite seem to be pegged down as either country or hip-hop.

Moreover, it turned out that the Kardashian family were the ultimate fans of the musician after they were seen kicking it with him at Coachella. One photo from the day showed Lil Nas flashing a massive smile as he posed for a picture with Kanye West and little North.

The success of Lil Nas’s “Old Town Road” became the end of Eminem's record. His "8 Mile" anthem had been the longest-running Billboard Hot 100 No. 1 hip-hop single of all-time. It reigned for 12 weeks. On July 2, 2019, Lil Nas X surpassed Eminem, as his track clocked its 13th week at No. 1 on the main chart, becoming the longest-reigning No. 1 hip-hop song in Billboard Hot 100 history.

In June 2019, he surprised his fans by seemingly coming out as gay. Lil wasn't fazed by the backlash he's received after it. He said he's not taking the hate to heart. Though he admitted he was hesitant before coming out, he said he felt like he was "opening doors for more people" with his decision.

"I don’t want to just live my entire life, especially how I got to where I’m at, just not doing what I want to do. I hope my fans will be accepting. Unfortunately, homosexuality was not really accepted in either the country or hip-hop communities."