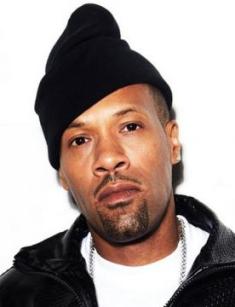 Reginald Noble, known as Redman, is an American rapper, DJ, music producer, and actor. The artist earned his fame in the early 1990s and collaborated with Method Man; he also presented a series of solo albums at Def Jam and his own label, Gilla House Records.

Reginald was born in New Jersey on April 17. 1970. He lived with his mother, Darlene, and later broke up with his family: the young man got involved in a bad company and consumed drugs.

In 1987, Noble was expelled from Montclair State University and sold substances to earn his living. Two years later, he miraculously escaped arrest and quitted the dangerous occupation; instead, Redman began to perform as a freestyle musician in New York parks and at friends’ parties.

One day, the frontman of EPMD Erick Sermon attended such a concert with Noble and Lords of the Underground; the musicians talked, and the would-be star moved to Long Island. He stayed in his new friend’s apartment.

The young DJ toured with Erick and EPMD; he was a handyman and filled the pauses between the band’s songs. In 1990, Sermon introduced the freestyler Redman to the audience for the first time; the young man participated in the main program. From that moment, the rapper’s life changed dramatically: he became Erick’s official partner in Def Jam Recordings and Chaos Recordings.

For the next year, Redman worked at Ian London Studios, North Shore Soundworks, and Power Play Studios. On September 22, 1992, he debuted with Whut? Thee Album; it was the mixture of hip-hop, reggae, and funk. The album reached the 49th position in Billboard 200 and got the golden status soon; The Source called the musician the rapper of the year. The songs “How to Roll a Blunt” and “Tonight’s da Night” consisting of popular artists’ samples were the most popular works; the latter track was also released as a double single to the album.

Although the artist finally earned recognition, he felt depressed. This mood dominated when he was recording the second disc, Dare Iz a Darkside; the cover picture portrayed Reginald with his body buried in the ground up to his neck. The rapper did not expect any success, yet the album debuted from the 13th position in Billboard 200 and received nine out of ten points according to RapReviews.

The third album, Muddy Waters, was released on December 10, 1996, and enjoyed the most favorable reviews. The songs “Whateva Man” and “It’s Like That (My Big Brother)” produced with Erick Sermon came out as singles. “Do What You Feel” became the soundtrack for the video game Grand Theft Auto: Liberty City Stories. At that period, Redman began to collaborate with Method Man (Clifford M. Smith); they contributed to Tupac Shakur’s “Got my Mind Up”.

In 1998, the duet gathered together again and created the song “Well All Rite Cha” and Def Squad’s “El Nino”. Further on, they released the full-fledged album Blackout! The premiere took place on September 28, 1999, and continued the chain of success for Def Jam.

The next work, How High, was used in the youth comedy under the same title; the rappers personified the main characters there. It was a good promotional campaign for both albums; new singles and music videos were broadcast on MTV and BET.

Soon, Redman returned to his solo career and presented the fifth studio album Malpractice. He performed the hit “Dirrty” with Christina Aguilera and contributed to the remix on Pink’s “Get This Party Started”; Eminem used his lyrics in “Till I Collapse”.

In 2007, the duet song with Snoop Dogg from Red Gone Wild. Thee Album was premiered. Noble suggested he was going to release a new album and continue to collaborate with Method Man.

Half of the promises was fulfilled in 2009: Def Jam recorded Blackout! 2. The Disc started from the fourth position in Billboard 200 and appeared in Top R & B / Hip-Hop Albums and Top Rap Albums; it had 79 points on Metacritic. The singles “Coc Back”, “Oh My”, and “Money on My Mind” preceded the long-awaited solo album Reggie, but they were not included there in the end. According to the artist, this work was born behind the Redman brand; it was created by his alter ego.

The album did not get much recognition, though. The failure made Noble postpone the upcoming material release so that he could master it. The eighth studio album Mudface came out in 2015; the recording of Muddy Waters, Too took four years.

The information about Reginald’s wife and children is kept secret. The rapper has a son who has recently graduated from college. Redman’s relatives are also fond of the hip-hop culture.

Today, hip-hop lovers are looking forward to Redman’s new album, Muddy Waters, Too. The release date has been changed several times; it will probably appear in summer 2019.

Unlike the previous works, the new disc was not supported by many singles; only the official music video “I Love Hip-Hop” was posted on the YouTube channel.