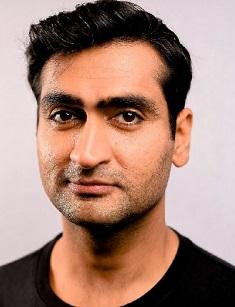 Kumail Ali Nanjiani is a comedian, actor, and writer from Pakistan. He is mostly known for his roles in movies like Brother Nature (2016), The Big Sick (2017), and TV series Silicon Valley (2014–present), Community (2014–2015), and Archer (2015). Nanjiani was also a host of two podcasts: The Indoor Kids and The X-Files Files. Last year, Kumail was included in the list of 100 most influential people in the world by Time.

Kumail Nanjiani was born in Pakistan in 1978 to Aijaz and Shabana Nanjiani. As a kid, Kumail attended St. Michael's Convent School and then Karachi Grammar School. When he turned 18, the guy moved to the United States to go to the Grinnell College in Iowa, where he studied computer science and philosophy at the same time.

Nanjiani’s career started from television, and only two years ago he moved to the cinematography. The first time when he was seen on TV was his appearance on a daily show, Saturday Night Live, in 2008. Nanjiani has a net worth of ‎$6 million.

By the way, apart from being active on the screen, Kumail is also an active user of social networks like Twitter and Instagram. At the beginning of this year, he posted topless photos of Roger Stone, a political consultant, and called him “buff." This went viral.

In summer 2011, Nanjiani and Ali Baker, who worked on the X-Play, started hosting a podcast The Indoor Kids about video games. Also that year, Baker left this project, and Kumail started hosting with his wife, Emily. Besides, Nanjiani often appeared on Harmontown, Dan Harmon's podcast, where they both played Dungeons & Dragons. In 2011–2014, Kumail had a supporting role in the television series Franklin & Bash.

Nanjiani had some recurring roles on several series like Adventure Time (2012–2016) and Newsreaders (2013–2015). In 2013, his Beta Male started airing on Comedy Central. The most famous episode was titled "Call of Duty." Comedy Central also announced about the show The Meltdown with Jonah and Kumail hosted by Jonah Ray and Kumail which started airing in summer 2014. Also that year, he got the role of Dinesh in the HBO sitcom Silicon Valley and started hosting a podcast The X-Files Files about the famous series.

In 2017, Nanjiani started focusing not on the television but the cinema. He co-wrote the romantic movie The Big Sick together with his wife, Emily. It was about their relationship, Kumail played himself, and the role of Emily was given to Zoe Kazan. Nanjiani’s movie got a lot of positive reviews, and it was chosen by the American Film Institute as one of the Top 10 films.

In 2019, Kumail voice acted in Men in Black International and played Stu in the comedy Stuber together with Dave Bautista, Iko Uwais, and others. In spring this year, it was announced that there were some talks between Nanjiani and Marvel Cinematic Universe concerned about the actor joining this company.

Since 2007, Nanjiani has been married to Emily V. Gordon, who is also a writer and producer. They met at a comedy show in Chicago at the Kumail’s performance. They started dating but soon after that Gordon was put into a coma and then diagnosed with Still's disease. Then, she recovered and became Nanjiani’s wife. They lived in Chicago and New York, and now the couple moved to Los Angeles. By the way, at present, the spouses are thinking about having a baby.

Nanjiani had 13 nominations, and he won three of them, including Kanbar Award for Storytelling and award for Best First Screenplay for the romantic comedy film The Big Sick (2017), and Auteur Award at the San Diego International Film Festival.