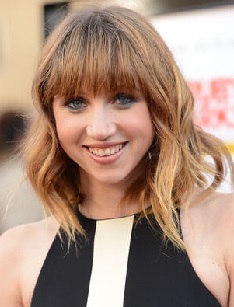 Zoe Swicord Kazan is an American actress and screenwriter. She has acted in some Broadway productions and has written Ruby Sparks (2012) and Wildlife (2018) together with her partner, Paul Dano, who was also a director of this project. Zoe has received awards from the National Board of Review for Best Cast (It's Complicated) and Detroit Film Critics Society for Breakthrough Performance (Ruby Sparks).

Zoe was born in Los Angeles in 1983. Her family is very talented: Zoe’s parents are Nicholas Kazan and Robin Swicord, both screenwriters and film directors. Her father was nominated for the Academy Award for the Best Adapted Screenplay for the film Reversal of Fortune in 1990, and her mother has also been nominated for Academy Award (Best Adapted Screenplay) and Golden Globe Award (Best Screenplay) for The Curious Case of Benjamin Button (2008). Besides, Kazan’s grandfather Elia Kazan was a film and theatre director, and his wife was a playwright, Molly Kazan. And that’s not all! Zoe also has a younger sister, Maya Kazan, who is an actress too.

Speaking about Zoe’s education, she attended three schools: Wildwood School, Windward School, and the Marlborough School. In 2005, she graduated from Yale University with a bachelor degree in theater.

Kazan wanted to be involved in the acting sphere since school times. In her interviews she tells that she was a really shy kid, she was always lonely and used to write a lot and dream about the world of cinema. Zoe wanted this future, not because of fame but because she wanted to express her feeling on stage and that was the place where she felt really happy. We are glad that the dreams of that little girl became true!

Kazan's career started with the roles in films and theater at the same time. Her debut movie role was Samantha in Swordswallowers and Thin Men (2003). Then, during four years, Zoe was not active in filming and performing. In 2007, she returned to her work and that year was saturated. Kazan starred in The Savages, Fracture, In the Valley of Elah, and one of the episodes of drama series Medium.

Next year was also busy as the previous one. Zoe played a minor role in August, Gretta Adler in Me and Orson Welles and Maureen Grube in Revolutionary Road. And during this year, she has appeared on the Broadway stage too.

In 2009, Kazan starred in the films like It's Complicated, where she played Meryl Streep's daughter, I Hate Valentine's Day and The Exploding Girl. In 2010, the actress had a leading role of Mary Catherine in the movie Happy. Thank You. More. Please, which was a directorial debut of Josh Radnor. Also that year, Zoe starred in Meek's Cutoff, where Paul Dano played her husband. In 2013, Kazan played one of the leading roles together with Daniel Radcliffe in the movie The F Word (or What If?), where the actors had a nude scene in the water. By the way, it was not the only time when Zoe showed up so hot in the film. There was a scene in Revolutionary Road (2008) when she was lying in bed naked.

Kazan’s most recent roles were Alice Longabaugh in Coen brothers’ film The Ballad of Buster Scruggs (2018) and Clara in The Kindness of Strangers (2019). Speaking about her appearances on the television, she starred in three episodes of The Deuce in 2017–2018.

Besides acting, Zoe also writes scripts. In 2012, the film named Ruby Sparks released. It was directed by Jonathan Dayton and Valerie Faris, and the screenplay was written by Kazan. The leading roles were taken by Zoe and her partner Paul. Most people think that this love story is somehow connected with Dano and Kazan, but the pair denies that suggestion and says that we in this movie we need to see only Calvin and Ruby, not Paul and Zoe. In 2018, the film Wildlife was released and got great critical acclaim. Kazan co-wrote it with Paul, who also directed.

Kazan has a net worth of $3 million which she gets from her acting both in films and on stage.

After debuting in the film in 2003, Zoe appeared at the first time on the stage as Sandy in the off-Broadway revival of The Prime of Miss Jean Brodie together with Cynthia Nixon in 2006. Next year, she performed in 100 Saints You Should Know at the Playwrights Horizons and Things We Want at the Acorn Theatre. By the way, at the second play where Zoe had the role of Stella, she met her current partner, Paul Dano, who played Charles.

In 2008, Kazan made her Broadway debut in the Come Back, Little Sheba together with S. Epatha Merkerson and Kevin Anderson. The New York Times described her work as a “first-rate performance” and also pointed that “Ms. Kazan is terrific in conveying the character’s self-consciousness," which, of course, caused a lot of attention to the young actress. Also in 2008, Zoe performed on the Broadway stage again – in Anton Chekhov's The Seagull among Kristin Scott Thomas, Carey Mulligan, and Peter Sarsgaard.

In 2010, Kazan played Harper Pitt in the 20th-anniversary production of Tony Kushner's Angels in America at the Signature Theatre.

Zoe does not only write scripts for films, but she also writes plays. In 2009, at the Humana Festival of New American Plays in Louisville, Kentucky there was a premiere of her play Absalom. This play was about tense relationships between father and his children, which had been workshopped starting from Kazan's junior year at the University. In 2011, her new play We Live Here premiered at the off-Broadway Manhattan Theater Club. In 2014, the third play Trudy and Max in Love had its premiere at the South Coast Repertory.

Zoe is not married, although, she has been in a serious relationship with Paul Dano since 2007. They met at the play Things We Want in 2007, where they both performed. Yes, the partners’ occupation is common: they both are actors and screenwriters. Actually, Dano had his directorial debut in 2018 with Zoe’s help. They co-wrote the screenplay of the drama film Wildlife that was based on the Richard Ford’s novel and included Carey Mulligan and Jake Gyllenhaal in the leading roles.

Also that year, they had something more together. Zoe and her boyfriend are now happy parents with their daughter Alma Day, who was born in summer 2018, although there were no reports about Zoe being pregnant. By the way, when Kazan was once asked why she was not married to Paul, she answered that they were not so religious and that is was not the most important about their relationship.

Zoe is an active user of social networks, and she is very open to the audience. On her Instagram we can see some daily photos; on her Twitter, she shares negative emotions about the President of the U. S., Donald Trump, and in her article, for The New York Times Zoe described the experience that she got at the age of 18 when she suffered from anorexia.

Now, Kazan does not weight herself, does not work out, except walking for just keeping her heart healthy. A long time ago, when Zoe has been recovering after anorexia, lots of people have been posting her pictures with the tags “thin-spiration” and “weight loss” which now the actress finds really weird and wrong. Actually, these health problems made something clear in Zoe's acting career. She, unlike many other actors, is not going ever to lose weight for some role.

Zoe's net worth is estimated at $3 million.

Kazan’s movies list is rather huge, so we will mention just a few of the films where she starred: