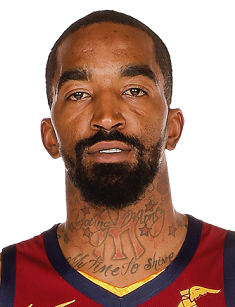 Born in Monmouth County, J.R. Smith started a basketball career in NBA in 2004, as a rookie of New Orleans Hornets. He was drafted right after high school. Smith was playing for Hornets, Nuggets, Golden Bulls (China), Knicks and Cavaliers. In 2016 Smith became the champion of association. He plays at a shooting guard position. Also, Smith is married and has four daughters. His brother Chris is also a professional basketball player. J.R. Smith is a wealthy individual with a net worth of more than $20 million, including all of his properties and earnings. Smith is the Brand Ambassador of SK Energy Shots.

Smith was brought up in small boroughs of Monmouth County. The son of Ida and Earl Smith was born on September 9, 1985. Smith has three brothers and two sisters. He was a multisport player and was good at football and baseball. Smith changed several schools before he started playing basketball in Lakewood High School in 2000. There he spent two seasons. Then he once again transferred as a junior, that time to St. Benedict's, where he also spent two years.

In 2004 Smith was recognized the MVP of McDonald's All-American Game. J.R. Smith said he wasn't thinking about the NBA until he heard his name announced that day. Right then, as he walked up to get his award, he knew his game was ready for the league. The honor meant nothing more than he was the best high school player that night. But Smith felt the importance, because of man, with whom he shared the award.

That knowledge was all he needed to know. Smith stood next to possible No. 1 overall pick Dwight Howard that night as they held the trophy together. And it was then when Howard told Smith that he was as good as gone then that he won the award with Smith, but not the other way around. Smith decided not to enter the college and declared for 2004 Draft.

The Hornets selected Smith at No.18 of the draft on June 24, 2004. Two weeks later the player signed a three-year $3.89 million contract with them. Smith immediately became the key player of Hornets. In his rookie season, he received three month’s awards. Made 76 appearances in the regular season, Smith was in starting five 55 times. Also, Smith scored 33 points in one game, and it is still one of his best career results.

Smith’s rookie season’s stats were 10.3 points, 2.0 rebounds, and 1.9 assists on average per game. The next season turned crumpled for Smith, who ended the New Orleans’ period of his career on the bench. The head coach was disappointed with the player’s attitude towards training, and he stopped trusting Smith. That fact led to the summer trade of Smith.

In two weeks of July 2006, Smith succeeded to change the team twice. Initially, he was traded to Chicago Bulls. Then he moved to Denver Nuggets. Season 2006-2007 was rather bad for Smith. He missed ten games in winter because of the Knicks-Nuggets brawl’s disqualification. In March, Smith missed eight games, because of the injury. In the playoff, he was absolutely useless and spent it mostly on the bench.

Made several career highs in next seasons, Smith set some franchise’s records and won the fans’ recognition. Being the player of Nuggets, Smith helped the club to win the division, scoring more than 12 points on average in all seasons in Denver. In 2011, Smith became the free agent and moved to China because of the lockout.

Smith spent one season in Zhejiang Golden Bulls. He was the league’s top player, scoring 34 points per game. He even earned 60 points once. Apart from other NBA players, J.R. couldn’t leave the Chinese league, when the lockout was over. The agreement between Bulls and the player didn’t allow him to return.

Smith spent three years in New York, showing his average career stats. The main achievement of the player was the NBA Sixth Man of the Year award. Smith could write his name in the history of the Knicks, as the third player, who made it.

In January 2015, Smith became the new cog in the King LeBron James’s mechanism. Smith immediately started to help his teammates, and in 2016, the Cavaliers played in NBA Finals. They were defeated by Warriors. Next season he won the NBA championship. That season Smith appeared in all regular and playoffs games of Cavaliers, scoring 12.4 points per game.

On October 16, 2016, J.R. signed a four-year $57 million contract with Cleveland. Soon he got injured and missed 36 games. In 2018 NBA Finals, Cavs were defeated by Warriors again. Smith became the meme when he was dribbling out the clock when he could have taken an easy shot for the win. It was the start of the viral "J.R. Smith Challenge" videos.

After the James’ transfer to Lakers, Smith stayed in Cavaliers and played only in 11 games in season 2018-19. He scored 6.7 points. In November 2018, the club announced that Smith would not play for the club anymore.

The Cavs had been trying to trade Smith for months, but the team was unable to find the right deal even after he agreed to extend his guarantee date from June 30 to July 15. In the last attempt, Cavs tried to trade Smith to Sixers. On July 15, 2019, J.R. Smith’s never-a-dull-moment run with the Cavaliers was over. Cleveland released the colorful shooting guard before his $15.6 million contract for 2019-20 season became guaranteed.

According to several news sources, Smith could join his former teammate LeBron in the Los Angeles Lakers. Adding Smith could provide another scorer and someone capable of knocking down outside shots. With the Lakers’ new duo of James and Anthony Davis, there’s bound to be a plethora of open jump shots available for teammates. The Lakers could choose to bring in a cost-effective option like Smith on a one-year deal, but the move wasn’t be surprising.

Beyond the Lakers, the addition of Smith could be a nice way for the Houston Rockets to bolster their second unit scoring. After acquiring Russell Westbrook via trade to pair with James Harden, the team had the NBA’s best backcourt duo, but another scorer off the bench could be a welcomed addition.

J.R. Smith, the Knicks guard with a history of legal troubles, was arrested in Miami Beach In May 2012 for failing to appear in court on a traffic matter. Smith was cited in May 2011 for operating a scooter without a valid driver’s license and was ordered to stand trial on July 25. When he failed to show, a bench warrant was issued for his arrest.

The same officers who cited Smith in 2011 spotted him at a South Beach business in 2012. The arrest affidavit noted that the officers “were aware of a possible bench warrant for a previous Miami Beach arrest.” Smith, whose legal name is Earl Joseph Smith, was taken to the Miami-Dade County jail and was later released on bond.

Smith’s license was suspended in 2009, as part of his sentence for a 2007 reckless driving accident that killed his friend, Andre Bell. The suspension ran through March of that year. Smith, who lived in New Jersey, had had his license suspended five other times.

The New Jersey native has a rich dating history. Before marriage, he had been in relationships with K. Michelle, Chanel Iman, Tahiry Jose, Britani Girard, and Solange. Also, he had an encounter with Rihanna in 2012 - 2013. Soon, Smith started dating his future wife, Jewel Harris. Smith proposed to her in August 2015. The pair had already had two children then, and Smith decided to recruit his daughter Demi to help him propose to Harris.

JR had Demi present her with a ring in a small red box. He had the event recorded and posted to his Instagram. Jewel cracked up hysterically as Demi was insistent on a response: either yes or no! As she continued laughing, she exclaimed, “Yes! Yes!” and the mission was accomplished. They tied the knot in August 2016 in New Jersey. The newspaper reported that LeBron James was overseas and not able to attend the wedding.

In two years, JR Smith’s wife became the mother to his four kids, and all four were daughters. Their third child was born five mothers prematurely in 2017. The spouses opened up about the experience in an interview. Dakota only weighed 1 pound when she was born. In June 2018 Jewel and J.R. welcomed their fourth bundle of joy to the world, naming the infant Denver. The couple shared her first photo via Instagram.