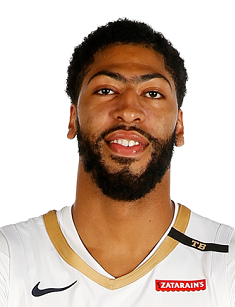 Born in the South Side of Chicago, Anthony Davis started a basketball career in NBA in 2012, as a rookie of New Orleans Hornets (currently New Orleans Pelicans). He was an NCAA star, drafted after one season in college. Davis was playing for Pelicans in 2012 – 2019. On July 6, 2019, he will become the player of LA Lakers, where he will play with the King LeBron James. Davis represents the national team of the USA.

He plays at a power forward or center positions, being one of the league's leaders in blocks. Also, Anthony became a father in 2018. Anthony Davis has a net worth of $35 million, including all of his properties and earnings.

Anthony was the youngest of twin children born to Anthony Davis Sr. and Erainer Davis. He was born on March 11, 1993. The family lived in Chicago at that time. As a child Davis loved basketball. All the members of his family were involved in it. They played each other very often. Anthony’s parents raised him and his siblings in a healthy manner.

Notable among Davis’s academic background was high school education at Perspective charter school in Chicago. The school which placed utmost priority in academic performance had neither gymnasium nor any platform that promoted athleticism. Consequently, Davis and his sporting mates explored other alternatives in playing the sport, including practicing at a nearby church.

The resultant effect was brief obscurity that lasted until his junior year when he impressively played AAU basketball and appeared in the Nike Global Challenge. It wasn’t long before Colleges, including Syracuse sought to offer him scholarships. Davis however committed to the University of Kentucky and played for its Kentucky Wildcats.

The observers called Anthony the rising star. Many of them predicted him the first number at following NBA draft. His coaches were excited by his abilities. He was very tall, fast, dribbled well, and had an excellent throw. So, he was ready for a professional NBA career. Wildcats won 16 games in conference. They didn’t lose.

Davis got a lot of awards. He scored double-double on average. At Kentucky, Davis couldn’t win the SEC Tournament, but Wildcats received number one overall seed in the NCAA 2012. Davis led them to their eighth NCAA championship. In Kentucky, Davis became the Most Outstanding Player of NCAA.

The New Orleans Hornets selected Davis in 2012. He was the first number of NBA Draft. After draft, he signed an agreement, which guaranteed Davis about $16 million. As a rookie Davis justified his draft’s number, demonstrating the outstanding game.

He debuted against Spurs in November. He scored 21 points. It was the team’s best result that day. However, Anthony missed some time because of his injuries. All of his returns were marked by excellent statistics.

In 2013 Anthony was invited to take part in the All-Star Game weekend. He was a participant of Rising Stars Challenge. He missed a part of a season because of injuries again. He returned and scored a double-double against Magic. He became the second Rookie of the Year.

Next season, Hornets changed their name and became New Orleans Pelicans. Anthony showed incredible game since the first matches. Pelicans won Magic. Davis became clubs’ youngest player, who scored 25 points and 15 rebounds per game. Anthony dropped out due to injury in December and lost the chance to spend a game at his native Chicago.

Davis recovered soon, and In January he became the participant of the Rising Stars Challenge again. Anthony became the replacement of Kobe Bryant in the Dream Team. It was the first call of Davis. Numerous injuries didn’t stop Anthony from ending the season as the third MIP of NBA.

Anthony expanded his contract with Pelicans and got a five-year agreement at the beginning of the 2015–2016 season. Soon he became the youngest player in the history of the NBA, who could score 59 points in a game. Pelicans played against Pistons. Davis was excellent in the next season too, but the Pelicans couldn’t reach big results.

Anthony was a starter of NBA All-Star Game 2017. In January 2018, he made double-double, scoring 48 points and 17 rebounds. It was his season high. The Pelicans won the Knicks that night. In playoffs, Davis showed incredible stats against Golden State, but Pelicans lost in 5 games.

Anthony’s teammate DeMarcus Cousins was traded to Warriors that year. Davis told nothing bad about Cousins but began thinking about his own leaving the club. DeMarcus became the perfect gain for Klay Thompson and others.

Davis gave a terrific start to the 2018-2019 season. He set personal records one after another. Davis renewed his season-high and career-high assists, rebounds, blocks and points in every game. He became the eighth youngest basketball player, who could reach 10,000 points. It was a game against Sixers.

In 2018 the journalists started to report that Davis turns down the extension of the contract with Pelicans. In January 2019, Anthony informed the club about his decision. He asked for a trade. His report became public. Davis was forced to pay a $50,000 fine to NBA. Pelicans decided to remove Davis from playing during the period of league trade. He stayed in Pelicans and started playing only after All-Star break. But his wish to move from the Pelicans became stronger.

Last half of the season Pelicans were searching for profitable exchange. By the summer, there was only one contender for Anthony, and it was Lakers. After lottery 2019 there were opinions that Davis would change his decision. Pelicans announced they would become the ideal place for Zion Williamson, the expected first draft number. Pelicans were even waiting for RJ Barrett, a former teammate of Zion. Knicks offered his rights in exchange for Davis.

However, in July, Davis will move from New Orleans and will join LeBron James. The Pelicans will receive three first-round draft picks and three young players. A lot of pressure was put on Lakers in recent years. And Anthony’s trade made them one of the next season’s major contenders for winning the NBA championship.

Right now, Anthony is one of the best players of NBA. This trade is a chance for LeBron James to win one more ring. Anthony will show his top plays next season. The annual salary of Davis will be about $25 million. Next summer he can expand the contract and get five-years-contract for $230 million.

Anthony Davis got the opportunity to perform in the national team of the USA thanks to numerous injuries of the players. The roster was completed in January 2012. Later Derrick Rose, Dwight Howard, Chauncey Billups, and LaMarcus Aldridge reported that would miss the upcoming Summer Olympics. USA Basketball chairman Jerry Colangelo and the coaching staff headed by Mike Krzyzewski were chosing among six players.

Kentucky big man and No. 1 pick, Anthony Davis, was selected as a replacement candidate. Anthony became the first player since 2004, which got a call to the large tournament without any prior NBA experience. However, even he ventured to miss the Olympics. Anthony got an ankle injury in training. Soon he recovered and joined the Team USA.

The USA won all games in London and the players became the Olympic champions. Two years later Anthony Davis and his teammates Stephen Curry, Klay Thompson, DeMar DeRozan, James Harden, and others made the national team of the US the strongest in the world.

Davis is not married. But he is a big professional in love affairs. The list of his girlfriends is quite long. In 2013 there were rumors that Anthony was engaged with Brittney Griner. He met her at a charity event. Brittney is a basketball player currently playing for the Phoenix Mercury in the Women's NBA and Russia for UMMC. Their relationships were short. The pair broke up. During an interview with Sports Illustrated on April 17, 2013, Brittney revealed that she was a lesbian.

Later Davis was romantically involved with another basketball player. Dylan Gonzalez played for the University of Kansas. The media wrote that the pair had a child. Davis denied those rumors. In 2017 Anthony was dating with Marlen. In May 2018 she gave birth to their daughter Nala.

Nowadays, Davis lives with his girlfriend and child in a newly brought home. It cost about $7.5 million. The residence is located in the Westlake Village area of Los Angeles County.

Other than his remarkable stats, another noticeable feature of Davis is his unibrow. There even were jokes that he looked as Frida Kahlo. He is so well-known for his connected brow that the professional basketball player decided to trademark the words “Fear The Brow” and “Raise The Brow” in 2012.

Davis might be taking advantage of his unibrow, but we are keeping our fingers crossed that he will not do the same with his teeth, particularly his lower teeth, which are horribly lined up. The fans expected he would fix his teeth after he was selected number one at the 2012 NBA Draft. But Davis they are still intact.