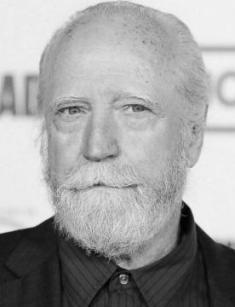 Scott Wilson is called the Hollywood old-timer: he had more than 80 roles. Although some of them were not leading, every part was splendid: the actor’s characters stuck in people’s memory and even surpassed some protagonists.

The artist’s roles were varied: criminals and murderers (Richard Hickock from In Cold Blood), historical figures (General George Marshall from the military drama Pearl Harbor), romantic characters (Norman from the melodrama A Year of the Quiet Sun). Hershel Greene from the popular series The Walking Dead was one of his most popular recent parts.

The future actor was born on March 29, 1942, in Thomasville, Georgia. The boy’s father died early. Little Wilson was in the third grade when the mother, Jewel, took the family to her home town.

The young man graduated from school in 1960. As a student, he showed his sports talent and proved to be one of the best basketball players receiving a scholarship. Scott entered Georgia’s Southern Tech University in Marietta but quitted his studies and sports due to some health issues.

The 19-year-old young man hitchhiked to California and met an actor in a Los Angeles bar; he accompanied him to the auditions. Wilson was mesmerized by the artistic world, freedom, and opportunities.

For the next five years, the young man studied acting and took every odd job to pay for his education. He also gathered some experience in local theater performances; for example, he worked on The Importance of Being Earnest.

The cinematographic debut was unusually bright: the actor could not even imagine that the crime drama In the Heat of the Night (1967) would win the Academy Awards and receive other honorable prizes. The newbie personified the suspect Harvey Oberst and collaborated with the 1960s celebrities Rod Steiger and Sidney Poitier.

It was impossible to ignore this brilliant start, and directors offered the handsome artist many roles. The same year, he played the murderer Richard Hickock in the detective In Cold Blood based on Truman Capote’s novel which was, in its turn, based on a true story when a family of farmers was murdered in Kansas City. Witnesses claimed Scott bore much resemblance to the criminal.

The project brought the artist much popularity; LIFE! posted his photo with another lead actor, Robert Blake, and the creator of the story Truman Capote on its cover.

The 1970s were fruitful for Wilson. The movie The Great Gatsby (1974) based on F. Scott Fitzgerald’s book under the same title was one of the most significant among his works. The artist personified one of the main characters, George Wilson, who mistook Gatsby for his deceased wife’s lover and shot himself later. The duet of Robert Redford and Mia Farrow was also brilliant. The Great Gatsby won the Academy Awards and the Golden Globe.

In 1980, Wilson appeared in the thriller The Ninth Configuration as the former astronaut Billy Cutshaw who had a mental disorder. This part brought him the nomination for the Golden Globe. Four years later, the audience could see the man in A Year of the Quiet Sun by the Polish director Krzysztof Zanussi. The picture gained Golden Lion and Pasinetti Awards at the Venice Film Festival.

In 1995, fans could enjoy three notable roles of their favorite: Chaplain Farley in Dead Man Walking, the leader of the pirates in the action Judge Dredd, and the hunter Zeb in Tall Tale. Besides, Wilson joined the Screen Actors Guild and protected his colleagues’ interests; he received the Ralph Morgan Award in 1997.

The new century brought a surprise: the artist debuted in the unexpected genres, comedy (Big Stan) and family movie (Shiloh). The latter project was a part of the trilogy that pictured the friendship between a boy Marty and a beagle Shiloh. Wilson played the dog’s cruel owner who had to revise his behavior later.

The artist’s TV career was also successful. He participated in several episodes of CSI: Crime Scene Investigation and played the casino owner Sam Braun. One could also see him in The X-Files and the HBO series Enlightened.

2010 was marked with the role that made the actor popular among the younger audience: The Walking Dead. The artist appeared in 33 episodes and personified the farmer Hershel Greene who tried to survive in the zombie apocalypse.

Unlike the majority of his colleagues, Scott Wilson led a calm and peaceful personal life.

The man married at the age of 35 and did it once and for all; his wife’s name was Heavenly. The couple had no children: it was a conscious decision they had made in their youth. He believed that some people were not created for fatherhood.

Scott Wilson died of leukemia on October 6, 2018. He passed away in his Los Angeles house at the age of 76.

The artist was supposed to participate in the ninth season of The Walking Dead; its broadcast started on October 7 and honored the actor’s memory.