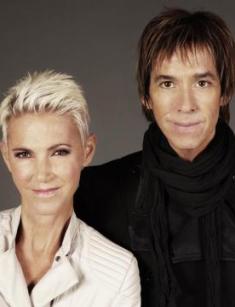 Roxette is one of the most popular pop-rock bands in the history of the music industry. The Swedish duo became famous after the release of the first song "Neverending Love." And then, in 1985, no one could have imagined that the names Per Gessle and Marie Fredriksson would soon become world-famous.

In many interviews, Per Gessle, a member of the Roxette band, says that the history of the duo dates back to 1960 when The Beatles was founded. It was these four legendary musicians who had a significant impact on the Roxette.

However, the Swedish duo appeared much later: in 1985, when Per Håkan Gessle became famous in Sweden. The cult musician, composer, and producer created the project after the project, and all of them were successful. The singer started with garage rock and experimented with genres (pop, eurodance, blues, country, euro-pop, easy listening).

In Sweden, Gessle was considered the king of pop music. Among his famous fans are the Swedish king Carl XVI Gustaf and his daughter Victoria. He started his career as a solo performer in 1978. Since 1977 Per and three musicians (Mats Persson, Micke Andersso, Anders Herrlin and Göran Fritzon) formed a band. Gyllene Tider has become a cult band for Swedish fans.

In 1982, Gessle made a life-changing acquaintance with the singer Marie Fredriksson. The celebrity at the time played the keyboards in different bands, and Per helped her to get to know the producer Lasse Lindbom.

Later, the company Alpha Records AB offered Per Gessle profitable cooperation, in particular, to supplement the repertoire of Pernilla Wahlgren with a new song. The demo of "Svarta Glas" did not impress the singer.

Per offered to perform the author's song to Marie Fredriksson, convincing that he created a future hit. Marie was cautious about the proposal because the composition did not correspond to her usual rock style. It was only after Gessle had reordered the arrangement and wrote an English text that the duo of Per and Marie was formed. The song was called "Neverending Love."

Initially, there was no great hope for the newly formed band. The media called this project a hobby. Per used the old name Roxette of the legendary Gyllene Tider.

Roxette made a success in 1986 after the first single "Neverending Love" was released. Interestingly, Alpha Records AB used a Swedish version of Svarta Glas. Niklas Wahlgren included the song in his collection, but it had to be replaced.

Roxette's debut album came out anonymously. Marie Fredriksson's relatives insisted that this would put his own solo career at risk, as fans would not accept a dramatic change of genre.

Summer is not the best season to release singles, as many radio stations are not fully functional. So it was in 1986. In order for "Neverending Love" to make it to the top of the radio show, Per went on a trick. Numerous friends voted for the song several times, changing their handwriting. Later it became clear that without additional manipulation the composition would have been a hit.

After a stunning success, Roxette released the first album called Pearls of Passion. The band became known to the people of Sweden but did not immediately reach the international level. In 1987 there was a new hit "It must have been love," which was later used as a soundtrack to the movie "Pretty Woman" with Richard Gere and Julia Roberts.

In 1987 Roxette went on its first tour with Eva Dahlgren and Ratata. A year later, Per and Marie managed to gain international recognition. In 1988, the Swedish duo released the third album called Look Sharp.

Thanks to a regular student Dean Cushman, who took a copy of the album from Sweden to Minneapolis and brought it to the KDWB radio station, the song "The Look" blew up the American charts. Before this case, only two Only two Swedish bands were known to be on the top of the charts in the U.S. It was ABBA and Blue Swede.

The popularity of the Roxette duo was growing, and the tickets for the concert tours were sold out completely. In 1989 another hit "Listen to your heart" appeared. Along with the fame grew the interest in the personal life of the participants. Judging from the lyrics of the songs (love ballads), tabloids concluded that Per and Marie were in a romantic relationship. On the pages of the editions, there was information about marriage and even about the divorce of celebrities.

Often the musicians ignored questions about personal life, but later it became known that Gessle and Fredriksson were connected exclusively by joint work and many years of friendship. Per has been married to Åsa Nordin since 1993. In 1997, the family had its first child, Gabriel Titus Gessle. Marie married the composer Mikael "Micke" Bolyos and gave birth to two children: a daughter named Inez Josefin and a son named Oscar.

The year 1991 was remarkable for the release of the fourth album Joyride and the debut world tour. The duo performed 45 concerts in Europe and then 10 in Australia. The fifth album Tourism was recorded a year later with producer Wayne Isham (director of Metallica and Bon Jovi music videos). An acoustic album was recorded for the USA and Canada with live recordings in unusual locations during the tour.

The work on the sixth album began in 1993 in Capri, and then in London, Stockholm, and Halmstad. Recording of Crash! Boom! Bang ended in 1994. Sales around the world reached incredible heights. The Swedish duo has a Spanish version of the album Baladas en Español from 1996, but the record was only successful in Spain.

Before releasing the next album Room Service in 2001, Roxette released a collection of hits. The single "The centre of the heart" was among the most successful, which helped to start a new tour around Europe. However, due to the terrorist attacks at the WTC in New York, the planned performances in South Africa had to be canceled.

In 2002, the news of Marie Fredriksson's disease struck many fans of the Roxette band. At the beginning of September, after running in the morning, the singer lost consciousness and, falling, hit the sink. Her husband immediately took Marie to the hospital, where she was diagnosed with a terrible brain tumor. For several years, the world had been empathizing with a Swedish celebrity, and it was believed that the Roxette would never be reunited again.

The duo canceled the concerts and stopped working for four years. Despite the hard rehabilitation, Fredriksson released the solo album The Change. There were also compilations of the most popular hits The Ballad Hits (2002) and The Pop Hits (2003). In 2006, the duo Roxette celebrated its 20th anniversary and pleased fans with the collection of the best songs The RoxBox, as well as new songs "One Wish" and "Reveal."

The first joint performance after a long break took place in 2009, during Per Gessle's solo concert. At the same time, the media seriously talked about the reunification of the legendary band.

Up until 2016, the duo toured the world as long as Marie Fredriksson was able to afford long journeys and uninterrupted concerts for health reasons.

The Roxette as a whole has ceased to exist, but Per and Marie continue their solo careers. In 2017, TV4 (a Swedish T.V. channel) said that Roxette could now be considered part of the history, as 30 years of existence could not go unnoticed.

Along with the cult duo of Gessle and Fredriksson, some musicians performed with the band, namely bassists Christoffer Lundquist and Magnus Börjesson, keyboard player Clarence Öfwerman, and drummer Pelle Alsing.

Marie Fredriksson hasn't left the country with concerts since 2016. However, the duo Roxette is still in the hearts of millions of fans.

In addition to the solo compositions, Per promises to perform the cult hits of the Roxette duo. According to the musician, Marie cannot be replaced, but she fully supported the idea of Gessle. Fredriksson is happy that after so many years people can still get in touch with the band's work.