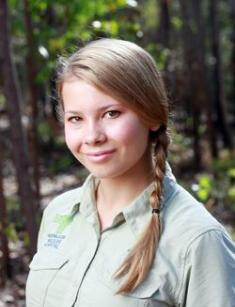 The Australia native, Bindi Sue Irwin is the daughter of a Wildlife expert, Steve Irwin and she started working on TV when she was just two years old. Currently, she is a famous TV star, actress and conservationist. Bindi received wide acclaim in 2007, hosting children’s TV nature documentary series Bindi the Jungle Girl. Also, she is a singer, who has issued four albums, and a writer, who has written several children's books series.

In July 2019, she got engaged to Chandler Powell. Bindi Irwin’s net worth is roughly estimated at $3.5 million, which she has earned with her acting and TV presenting.

Bindi’s birthplace is Australian Buderim. Steve and Terri Irwin welcomed their first child on July 24, 1998. Steve named his daughter after his favorite crocodile at the zoo, Bindi the Saltwater Crocodile. This crocodile was best known for the viciously protective mothering of her nest. Also, the word “Bindi” has Aboriginal descent and means “young girl”. Bindi’s younger brother Robert appeared on December 1, 2003.

Bindi started appearing on TV shows as a kid. In 2002 she became the cast member of Australian band’s music video. Also, she was a regular member of her father’s TV shows. According to Bindi, the best part of filming was getting to work with her dad. He was so much fun, and he taught her so much about wildlife and how important it was for people to care about animals.

Bindi lost her dad in 2006. Steve died aged 44 while filming on the Great Barrier Reef when a stingray's barb struck him in the heart. After that, his bright-eyed, bushy-tailed daughter’s life was changed forever. An eight-year-old Bindi stood in front of a TV audience of 300 million to speak at her dad’s memorial service.

Bindi got home education. Only in 2014, she entered TAFE Queensland.

Steve Irwin always knew his daughter's fame would eclipse his own and only ever wanted to be her co-star. At the age of eight, Bindi appeared on the front cover of New Idea. She became the youngest person to do so in the magazine's then-104-year history. A survey in the magazine showed 93 percent of readers believed she should follow her father's wildlife crusades as the "Crocodile Huntress".

And Bindi did it. Initially, she found herself acting as the family spokesperson, giving interviews with important TV personalities such as David Letterman, Ellen DeGeneres, and Larry King. During her youth, Bindi continued to appear with animals and starred in her own wildlife documentary series, Bindi the Jungle Girl, which aired 26 episodes between 2007 and 2008.

She was only nine years old when she won a Daytime Emmy Award for Outstanding Performance in a Children’s Series, for the same documentary series. She was also featured on a children’s fitness DVD called Bindi Kidfitness.

Also, Bindi proudly worked as an Australian tourism ambassador. As her notoriety was grown, Bindi became a presenter at awards shows and made a wide array of appearances in documentaries and events associated with conservation efforts, and animal awareness.

Also, Bindi began writing books. She issued children’s book series Bindi’s Wildlife Adventures. There were 15 books in the series. She was a busy young lady in 2012 when she did a voice-over on an episode of the children’s cartoon Curious George and hosted a game show called, Bindi’s Bootcamp. Irwin also performed in an episode of My Babysitter’s a Vampire. In 2015 Bindi became Dancing With the Stars champion.

Bindi has tried herself in many areas, and the music wasn’t the exception. In 2006 she issued her first album. In 2007 Bindi wrote and released her first single. Bindi formed various bands in 2008 and 2009. All in all, Irwin has issued four albums.

Bindi Irwin started dating with Chandler Powell in 2013. Currently, she is engaged to him. Her longtime boyfriend made a special gift for Bindi’s 21st birthday and proposed in honor of it on July 24, 2019. Soon, on her Instagram account, Irwin posted along with photos of her, Powell and her engagement ring:

"On my birthday I said ‘yes’ and ‘forever’ to the love of my life. Chandler, close to 6 years ago I fell in love with you and every day since has been a whirlwind of adventure and true happiness. I’m so looking forwarding to spending our forever together as your wife. Here’s to a lifetime of friendship, purpose and unconditional love. — Now let’s get married already!

"Almost six years ago we met at Australia Zoo. I immediately fell head over heels for your kind and thoughtful heart that radiates so much light. I love you more than anything in this world, and I always will. Forever together sounds perfect."

Bindi's brother Robert and her fiancé are great friends.