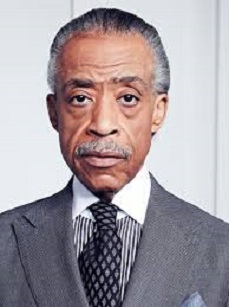 The NYC native, Alfred Sharpton became widely known as the activist in the civil rights movement. He is a former presidential candidate and MSNBC talk-show host. Also, he hosts a radio show Keepin it Real. Al has achieved justice in many lawsuits involving African Americans and became their mouthpiece in the political arena of the USA. Also, Sharpton published several books. He was married twice and became the father of two daughters. His net worth is roughly estimated at $500,000.

Alfred was brought up in the boroughs of New York City. He was born to his parents on October 3, 1954, in Brooklyn. He was an extraordinary boy for those places. That was evidenced by the fact that he began to preach at the age of four. He even didn’t know how to read or write then. Al was ordained as a minister when he took ten years.

At the same age, his father left the family to continue a romantic relationship with Al’s half-sister. That incident was a big blow for Al’s mother, Ada, which was forced to find a job. She earned very little to pay for housing and feed her son, so they moved to the house in the native neighborhood of Sharpton.

While Alfred was studying at the high school he founded the National Youth Movement to raise money for poor youth and fight drugs. In 1972 Alfred was named youth director of Shirley Chisholm's presidential campaign. After high school graduation, Al entered Brooklyn College but decided to drop it out in 1975.

Al Sharpton is known as a versatile person. In 1980 - 2000, he was involved in a lot of high-profile cases that affected the black community. He organized several protests against what he believed were injustices and incidents of racial discrimination. In 2011 he became the MSNBC’s host of PoliticsNation. Since then, he has discussed a lot of social and political problems with various guests.

In 2018 Bernie Sanders, presumed candidate for president in 2020, discussed with Sharpton how his progressive agenda had been taken up by numerous other contenders for the Democratic party nomination. In April 2019 MSNBC presented Not Just Black and White: Race and the 2020 Election, a one-hour special featuring leading 2020 candidates focused on topics of racial equality. Al Sharpton became the program’s host.

The program offered an intimate look at the important topics of the upcoming 2020 election, including social and economic inequality, identity politics, and more. The special featured an in-depth conversation with Stacey Abrams and one-on-one interviews with Sen. Cory Booker, Pete Buttigieg, Julián Castro, John Delaney, Sen. Kirsten Gillibrand, Andrew Yang, and others.

In July 2019, Al Sharpton entered into an online skirmish with President Trump. The story started from Trump’s tweet, in which he criticized Baltimore as a rodent-infested mess where no human being would want to live and attacked Rep. Elijah E. Cummings, who represented part of the city.

Al went to Baltimore to denounce the president's attacks. Trump called Al as a con man, a troublemaker, always looking for a score. And Sharpton posted: "I do make trouble for bigots. If he really thought I was a con man, he would want me in his cabinet." At the news conference, held at a Baltimore church, Sharpton said the president had attacked the city in “the most bigoted and racist way.”

Over the years, Sharpton appeared in several movies, TV series and shows. He filmed in Mr.Deeds, Malcolm X, SNL, I Hate My Job. Started a broadcasting career in 2005, Alfred signed a deal with Radio One, the largest black-owned radio company in the country, which paid him more money than he had made anywhere else in his life.

Sharpton started working in organizations, which aimed to improve the lives and rights of black communities, at the high school. Since then he became widely known as civil rights activist. He was involved in high-profile court cases involving crimes or accusations against African Americans. He organized public protests several times and found success in that.

In 2019 activist was excited that the NBA wanted to do away with the “owner” title because it too closely mirrored slavery. Many NBA teams were considering retiring the term. It had been a high-level conversation in the league for over a year then, stemming from the racial undertone it can have for the primarily Black NBA players.

The hype around the “owner” conversation gained buzz in 2018 when NBA player Draymond Green appeared on LeBron James‘ show The Shop and said, “You shouldn’t say, owner,” also suggesting the title should be changed to either CEO, chairman or majority shareholder. According to Sharpton, a lot of players were descendants of people that were enslaved. When they heard the term owner, it was a much different connotation than other people thought.

In July 2019 social justice leaders called for help in getting freedom for A$AP Rocky. The rapper has been detained in a Swedish jail following a violent incident that happened in the country. Rocky and his entourage filmed two strange men who followed them through the streets. The men harassed Rocky and his crew, often getting physical and angry as they attempted to provoke a fight.

Rocky was both seen and heard urging everyone to move on and let the men be, but ultimately the confrontation ended with one of the men being treated at a hospital following a fight with Rocky and his security. Rocky was arrested on suspicion of assault. There were conflicting reports on the conditions in which Rocky was experiencing in the Swedish jail.

Al Sharpton lent his voice to the fight for the Harlem-born rapper’s release. He met with Renee Black, Rocky’s mother, and other relatives at his National Action Network corporate offices in New York, and called on members of Congress to join him in attempting to appeal to the State Department for intervention. He was also seeking permission to visit Rocky as a minister.

Al Sharpton established himself as an African -American human rights defender. He was very proud of Barack Obama’s victory in 2009. According to Al, was to equalize the rights of all races of which the country's population consisted. Sharpton also is known as a supporter of LGBTQ. He found out it insulting to divide the black people and the white, the gays and lesbians. According to him, all of the people have equal rights despite their beliefs.

At the age of 20, Sharpton first married. He tied the knot the recording artist Marsha Tinsley, but they were spouses less than a year. In several years, Alfred met his second wife, Kathy Jordan, then-James Brown backup singer. The two married in Las Vegas in 1980. Over the years, the couple welcomed two daughters Dominique and Ashley.

Al and Kathy announced their divorce after 24 years of living together. They broke up in 2004, but neither Sharpton nor Jordan has filed for divorce till date. In 2009 Sharpton had a love affair with Lisa Raye. In 2013 he was dating Aisha McShaw, a personal stylist. She was seen on his arm at several black-tie affairs, such as President Obama's holiday party.

On one of those parties, Aisha was asked what kind of relationship between them. She answered that she was Sharpton’s girlfriend. At that moment Alfred intervened to shepherd Aisha away from a reporter.

Over the years Alfred went through several body transformations. At the beginning of the 2000s, he lost 30 lbs. and then put the weight back. The real turning point for him was getting criticism from his daughter. He decided to lose weight through weaning himself off of meats and starches. Soon Alfred became more strict about his diet and went from 305 lbs. to 129 lbs. in 2010 – 2014, and did it without surgery. He lost more weight than he was at the end.

The internet never misses an opportunity to crack a few jokes. In June 2017, Sharpton made it to the social media's trending list, thanks to a pre-workout selfie on Instagram, in which he sports leg socks and knee-long shorts. Another mirror selfie featured him in a bathrobe holding a comb. Meanwhile, a video posted on Twitter showed a suited Sharpton doing one-armed pushups in an office room.

In 1988 he started trying to be elected for US Senate. He didn’t find success in that field several times in a row. He failed 1988, 1992 and 1994 elections. Sharpton even wanted to become the NYC mayor in the late 1990s, but he also lost the elections. The same happened in 2004 when Alfred ran for president.