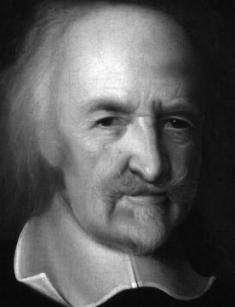 Thomas Hobbes is an English scientist and philosopher of the 17th century who was considered the founder of political philosophy and contributed to such sciences as history, jurisprudence, theology, physics, and geometry. Hobbes’s most famous work is the book "Leviathan," recognized as one of the earliest and most influential examples of the social contract theory.

Thomas Hobbes was born in the English city of Westport, now called Malmesbury, on April 5, 1588. The boy was named after his father, Thomas Sr., who served as vicar in Charlton and Westport. When the Hobbes children were small, the father fought with the local clergy and left London, leaving the family in the care of his older brother, a wealthy and lonely merchant. The name and occupation of the mother remained unknown.

As a child, the future philosopher attended a local church school, and then a private school. In 1603, Thomas became a student at Magdalen Hall, which was the predecessor college to Hertford College. Following his own curriculum, Hobbes received a bachelor's degree. He was recommended by one of the teachers as a tutor to the aristocratic Cavendish family.

Thomas became a companion to younger William, and in 1610 the young men went on a tour of Europe, during which Hobbes became acquainted with advanced scientific and critical methods that were fundamentally different from English scholastic philosophy. The future genius avidly read classical Greek and Latin authors and translated their works into his native language. During this time, his most famous work was the translation of Thucydides' History of the Peloponnesian War.

After Hobbes' companion died of the plague in 1628, the tutor had to look for a new job. For a while, he associated with poet and playwright Ben Johnson and then worked as a secretary for the English philosopher and politician, Francis Bacon. At that time, the future scientist became interested in geometry and thoroughly studied Euclid's The Elements, drawing from the book the methods of writing theses and presentation of proof.

Until 1631, Thomas served as a tutor to Baronet Gervase Clifton, and then returned to Cavendish's house to raise the oldest son of his previous student. Over the next few years, Hobbes expanded his knowledge of philosophy, learning philosophic debates. In 1634 he went to Europe again, where the man joined the group, held by Marin Mersenne, and regularly participated in philosophic debates with René Descartes and Pierre Gassendi.

The English revolution of 1640 - 1653 forced Hobbes to leave his homeland for a long time and settle in Paris. There, under the influence of the members of Mersenne’s group, the philosopher finally formed a system of views on the fundamental questions of human existence.

At this time, Hobbes worked as a mathematics instructor for the young Prince of Wales, who came to France from Jersey. Returning to London in 1651, the scientist published his works and the final section of the philosophical system, which he created for 20 years.

In 1666, the House of Commons introduced a bill against atheism and profaneness, and Hobbes' books, which fell under the shadow of heresy, attracted the close attention of the authorities. Fearing persecution, he burned compromising papers but still lost the right to publish works in England. The last books of the scientist were an autobiography written in verse and the translation of the ancient Greek book "The Odyssey" by Homer into English.

There is very little information about the personal life of the philosopher. He probably lived alone and did not have a wife or children. According to contemporaries, Hobbes preferred to work in the dark by candlelight, so the curtains in the house were always left closed. He walked a lot and talked with smart and educated people instead of reading books.

Hobbes suffered from a bladder disorder, which in October 1679 caused a paralytic stroke. It led to the philosopher’s death on December 4, 1679.

Philosopher Hobbes was a materialist who denied the existence of incorporeal substances and invented his own system of thinking about man and the universe. In his early books, the scientist showed that physical phenomena were universally explicable in terms of motion, believing that specific bodily movements were involved in the production of specific phenomena, such as sensations, knowledge, attachments, and passions, and determined the interaction of people and the formation of society.

In the early 1640s, Thomas distributed the treatise called “The Elements of Law, Natural and Politic” which was first divided into two small volumes (“Human Nature” and “De corpore politico”). In this work, the scientist first touched on the topic of power and developed the principles that the sovereign should follow. In 1642, Hobbes wrote a work entitled “De Cive” (“On the citizen”), which was initially published in Latin and translated into English 11 years later.

This book later became part of the trilogy “The Elements of Philosophy”, consisting of “De Cive” (“Concerning the Citizen”), “De Corpore” (“Concerning Body”) and “De Homine” (“Concerning Man”), in which the scientist described the natural state of man, requiring the establishment of stable government, in terms of politics and theology. For the first time, it featured the phrase “war of all against all," which Hobbes subsequently used in Leviathan and included in the collection of quotes.

The book “Leviathan or The Matter, Forme and Power of a Common-Wealth Ecclesiasticall and Civil—commonly referred to as “Leviathan," has become a classic Western work on government control and a vivid example of the social contract theory.

In this work, the philosopher described a man, comparing him with the matter, which was in continuous motion. He did not pay attention to the incorporeal non-material soul and the abstract concept of an idea. Speaking about good and evil, Hobbes claimed that they were human desires or tendency to move toward or away from the object.

Denying the social concept of the greatest good, the scientist admitted the existence of the greatest evil, which was the fear of violent death and served as a supporting element of state power. When a person finds himself outside the political coalition, it inevitably leads to an anarchist state, causing a war of all against all.

Hobbes believed that this state of affairs forced people to give up natural rights and conclude agreements that were controlled by a society that had the privilege to use force embodied in the concept of "state." Depending on the sovereign who represented the interests of a person, Hobbes identified three types of the commonwealth: monarchy, democracy, and aristocracy, which had quantitative and qualitative differences.

Giving preference to the monarchy, the scientist wrote that the wealth, power and honor of the sovereign depend on the welfare, strength, and reputation of the subjects, which is impossible in a democratic or aristocratic state.

In “Leviathan,” Hobbes explicitly stated that a ruler or sovereign should control civil, military, judicial and church matters and completely rule out the possibility of separation of state powers. This situation generated social protests leading to armed uprisings.

The treatise was first published in 1651. Its frontispiece features a giant emerging from the landscape, whose chain mail is composed of many tiny people. Hobbes was praised and criticized more than any of the prominent thinkers of that era. Young philosophers borrowed the author’s ideas about the state, developing them in their works. One of the most famous followers of Hobbes was the English materialist scientist, John Locke.

After “Leviathan,” Hobbes published a treatise, “Of Liberty and Necessity” and “The Questions concerning Liberty, Necessity and Chance,” in which he developed the original theories on natural right, fear, freedom, and natural law.

The scientist introduced the concepts of deliberate and reckless actions, calling them a sequence of desires, and freedom was interpreted as the absence of internal and natural obstacles to decision-making. The philosopher believed that everything happened due to an external impediment and could not happen by itself.

Hobbes's works became classics of political philosophy and were repeatedly translated into foreign languages. After the death of the scientist in England, “Dialogues between a Philosopher and a Student of the Common Laws of England” and “Behemoth, or The Long Parliament,” written in 1666 and 1668, were published.

In the state of nature, every person has a natural right to do anything one thinks necessary for preserving one's own life.

It is a "right" of making laws… that every man ought to endeavor peace, as far as he has hope of obtaining it; and when he cannot obtain it, that he may seek and use all helps and advantages of war

For 'true' and 'false' are attributes of speech, not of things. And where speech is not, there is neither 'truth' nor 'falsehood.