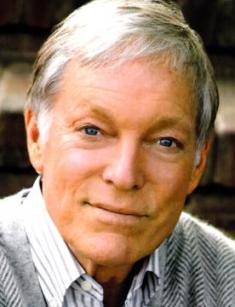 Richard Chamberlain is an American film and television actor, singer. On his record, there are roles in the acclaimed movies Shōgun, The Thorn Birds, The Bourne Identity.

For his work in the television series Dr. Kildare, the actor was honored the Golden Globe Award, and after the romantic drama mini-series The Thorn Birds based on the bestseller, in which Chamberlain appeared in the image of the priest Ralph de Bricassart he was forced hide from crowds of fans.

The future star was born in the spring of 1934 in Los Angeles. At the baptism ceremony, his parents gave him the name George Richard. He was the youngest in the family, having a brother, Bill, who was six years older than him. Richard's parents were not connected with art in any way. The head of the family worked as a sales agent in a company that supplied goods to a chain store.

In 1936, when Richard was two years old, his parents bought a small mansion in Beverly Hills, near the "factory of dreams," which could not but affect the character and hobbies of the boy.

At first, Richard wanted to paint pictures after receiving a high school diploma enrolled in a college in the town of Claremont near Beverly Hills, where he learned the techniques of applied art. But in college, the young man became interested in theater – the school's drama club inspired him.

In 1956, Chamberlain graduated from college, but brushes and paints were put aside. Richard dreamed of becoming an actor. The young man was drafted into the army, and plans for a career had to be postponed for two years, but after serving in Korea and returning to Beverly Hills as a Sergeant, Richard Chamberlain returned to the dream of the stage.

In search of roles, the future actor went to agencies and studios in Los Angeles. Passing through auditions, Richard Chamberlain realized that the ability and desire to act was not enough. He needed a professional base, so he took acting lessons from private teachers and absorbed the basics like a sponge.

The cinematic biography began a year later. 25-year-old Chamberlain got offered roles in a couple of episodes of Gunsmoke and Alfred Hitchcock Presents. The projects did not bring fame, but Richard learned to stay in front of the camera and got the first experience of filming.

The American actor felt the taste of fame in 1961. MGM Studio offered the little-known actor to play a central character in the series Dr. Kildare after a successful audition. After the release of the first series of the TV movie and the ensuing excitement, the producers were convinced that the project would be a sensation. The filming lasted five years, until 1966.

In 1963, for his work in the project, the actor was awarded a Golden Globe, he got famous in the whole world. The audience flooded the star with enthusiastic letters. Their number – 12 thousand a week-exceeded the number of messages to Clark Gable after the release of Gone with the Wind.

While acting in films, Richard Chamberlain remembered his youthful passion for music. The actor took vocal lessons from private teachers and soon released five albums. The actor tied up the composition of one of the collections with movie bestseller Dr. Kildare. The song with the same title became a hit and got in the top ten of the Billboard Hot 100 Charts.

Creative biography continued with his work on the theater stage. In 1968, Chamberlain played Hamlet on the British stage, where Shakespeare's play had not been performed for 40 years. Richard brought back the trend of theater-going. Rave reviews of the American star's skill were heard on both sides of the ocean. Hamlet performed by Chamberlain received praising reviews in Europe and America.

At 45, the American played a critical role-Pilot-Major John Blackthorne – in the series directed by Jerry London Shōgun and received a well-deserved award - a Golden Globe. The image of john Blackthorne brought the actor a new wave of fame. The American took the third step in the popularity rating – the first went to Sean Connery and the second - to Albert Finney, and the series was the central event of the year.

It seemed that the star actor had hit the peak of his popularity. Chamberlain played Aramis and Dantes in the film adaptations of the novels of Alexander Dumas, the classic Russian writer Anton Chekhov and the British poet Byron, Giacomo Casanova, and the monarch Louis XIV. However, the role of Father Ralph de Bricassart in the film adaptation of the bestseller by Colleen McCullough had raised him to new heights.

The mini-series was released in 1983 and won the Golden Globe. Chamberlain received the same award. The popularity of the artist was such that Richard could not go out without hiding half of his face with sunglasses.

Subsequent roles in feature films – the thriller of the Rodger Young, the Bourne Identity, the drama movie Dream West and joint American-Yugoslav war film Wallenberg: A Hero's Story destroyed the stereotype about Chamberlain being the King of only television series.

European viewers remembered Richard Chamberlain for his roles in the motion pictures about Quatermain (King Solomon's Mines, Allan Quatermain and the Lost City of Gold). In the movies, Chamberlain appeared in the company of Sharon Stone.

In 2011, Richard Chamberlain reminded the world about himself. With his participation came out the films The Perfect Family and the long-running family drama Brothers & Sisters.

Chamberlain never concealed his sexual orientation. In the early 1970s, the actor had an affair with his colleague Wesley Eure, but in 1977 Richard met colleague Martin Rabbett. The couple settled under the same roof in a house in Hawaii, away from the eyes of paparazzi and fans.

In the mid-1980s, Richard and Martin played brothers in a film about Allan Quatermain. To give Martin the right to inherit his estate in the event of his death, Richard Chamberlain and Martin officially became partners.

In 2003, the artist published a book, calling it Shattered Love: A Memoir. On its pages, Chamberlain shares a true story about his experiences, his anxiety, and problems because of his sexual preferences.

In 2010, the actor temporarily moved to Los Angeles, leaving home in Hawaii and Martin, and focused on filming. He recalled an old hobby and again started drawing pictures. They are always filled with philosophical meaning.

Richard Chamberlain's net worth is estimated at $20 million. The star, who is now over 80 years old, continues to appear in television series. In the 2000s, viewers saw their idol in episodes of Nip/Tuck, Leverage and Chuck.

Richard Chamberlain appears on the Broadway stage and plays in musicals, and in 2017, he starred in the episode of Twin Peaks.