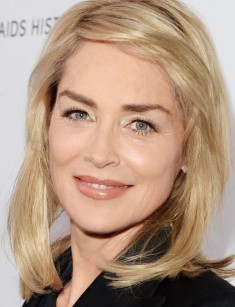 Sharon Stone is an actress and former model, producer. In the field of art Sharon was awarded the title of cavalier lady of the French Order of Arts and Literature. Creative biography of Sharon Stone has 65 projects.

Sharon Vonn Stone was born on March 10, 1958 in the Pennsylvania town Meadville to the family of a worker and a housewife. All in all, the family had four children. Parents paid much attention to Sharon's studies. According to the star, Stone grew up as a closed girl, who was more interested in books than in physical development. In her youth, Sharon was a shy girl, and thus she made performances in the garage. She used the gates as a curtain.

In addition to books and theater in the life of young Sharon, there was another passion - horses. Once the girl even got a scar by riding a horse. Sharon unsuccessfully caught a rope, which left a trace on the neck. It was before the graduation.

Sharon Stone is has not only beautiful appearance, but also a high IQ level -154. The girl finished school and entered the university at the faculty of literature.

At 17, the future actress worked in McDonald's, then she quit the job and received a contract with the model agency Ford. Sharon lived in Paris and Milan. Stone's appearance produced the proper effect, and Sharon Stone had shootings for magazine covers and advertising campaigns. Stone worked more as a photo-, and not a podium model because of the small growth for this profession - 174 cm.

Deciding that modeling career was over, Stone moved to New York. In 1980, Sharon made her debut in Woody Allen's film "Stardust Memories." To shoot in the film of a famous director is a great success, but the role was too small to get other roles. During this period, Sharon Stone appeared in episodes of serials. Then the girl played a supporting role. Among such films as "King Solomon’s mines."

The actress believes that it was difficult to develop because of her appearance. Sharon Stone doesn’t know what to do for a long time. The actress finally appeared in the cult film "Total Recall". Sharon plays the wife of the hero Schwarzenegger. According to the actress, Arnold Schwarzenegger taught her how to play before camera and to take her appearance seriously.

Sharon Stone again and again is offered to play girlfriends of such actors as Steven Seagal, Sylvester Stallone and others. But Sharon wanted more offers, and didn’t want to return to the "middle level". In the plans of the actress - to become a star of the first magnitude. And then Sharon Stone had a nude photo session for Playboy. Naked girl caused so many responses that Paul Verhoeven immediately called her in his film "Basic Instinct".

The film "Basic Instinct" in 1992 brought Sharon Stone a real fame and recognition. The heroine of the actress is not an attachment to a strong hero, but the main role. The actress received two MTV movie awards as the best actress and most desired woman.

In the films "Sliver" and "Intersection", the actress tried to escape from the role of a sexy femme fatale killer. In "Sliver" her character is the embodiment of femininity, softness, the type of woman that is easy to meet in everyday life. But the films did not succeed. "Intersection" brought Sharon Stone anti-prize "Golden Raspberry" as the worst actress of the year.

Stone appeared in the western "Fast and dead". On the set, the actress rides a lot, as she likes, rides the prairies, drinks beer in the evenings and wears comfortable clothes. But the box office were not big and Stone understood that she chose not "those" roles, although in every role the actress finds something for herself.

In 1995, the role in the movie "Casino" by Scorsese was successful. The director praises the actress, telling the press that Sharon Stone played the role magnificently. In the film, Sharon Stone had to wear a gold dress weighing 20 kg, but the actress still felt the excitement. For acting in "Casino", she received a "Golden Globe" and was nominated for Oscar.

In 2003, Sharon Stone received a star on the Hollywood Walk of Fame.

In 2006, Sharon starred in "Basicinstinct-2." At first the actress refused, because she considered the plot irrelevant. But later changed her mind. Unfortunately, after that the actress was nominated for the "Golden Raspberry".

Then she appeared in "Gods Behaving Badly", where Sharon Stone appears in the role of Aphrodite. And in 2013, the actress even appeared in the Russian film "Love in the Big City-3".

In 2015, Sharon played the US vice-president in the television series "Agent X". Critics gave mixed reviews on the series, calling Sharon Stone one of the few pluses of this show.

From 1984 to 1987, Sharon was married to Michael Greenburg, a screenwriter and a producer. At that time, Stone was just beginning her career as an actress. In 1993, Sharon Stone was engaged to William Jay McDonald, the producer of "Sliver", but they broke up in a year

From 1998 to 2004, Sharon married to Phil Bronstein, the editor of the San Francisco Chronicle. Unfortunately, because of health problems Sharon suffered 2 miscarriages. But Stone really wanted a real family. Together with her husband they adopted a child. And after the divorce, the actress adopted two more boys.

For a long time, Stone complained of headaches. As a result, the doctors found aneurysm in her brain. In 2001 Sharon was on the verge of life and death, the actress had a brain haemorrhage. Since then, Stone completely abandoned smoking and alcohol. In addition, the actress suffers from asthma and diabetes.

Sharon is engaged in charity and has an active life. In 2013, the actress was awarded the prize of the World Summit for Contribution to the Fight against AIDS.

bout new relations of the actress. Sharon Stone was noticed together with sports agent Lonnie Cooper. Sharon and Lonnie walked together, swam in the ocean and hugged, creating the impression of a happy couple. Representatives of the actress did not comment on these photos, and Sharon did not officially announce new relations.

In May 2017, the premiere of the romantic comedy "A Little Something for your birthday", in which Sharon played the main role. On the red carpet of a special film show, the actress appeared in the company of her sons. Stone shared photos with the children on the page in Instagram. Sharon has a verified account, which attracted 340,000 subscribers and regularly shares photos from red carpet and home holidays. At the premiere of the film, the actress came in a short emerald dress, provoking among the fans a debate about the suitability of the outfit. The actress is almost 60, and haters thought the Stone had a very open dress.

On May 10, 2017, the Association for the Study of Breast and Prostate Cancer, with which Sharon Stone cooperates and holds joint actions, recognized the actress as the "Mother of the Year." Sharon Stone received the award from the hands of her own children.

•  "A Little Something for your birthday" 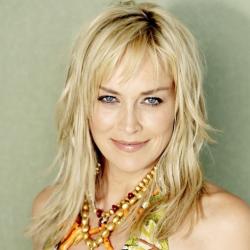