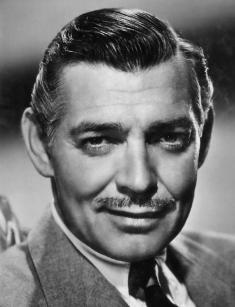 Clark Gable is an American sex symbol of the late 1930s and early 1940s. The actor made it into the history of cinematography and was often referred to as "The King of Hollywood." He became the first actor of the leading male role in the film adaptation of the novel "Gone with the Wind," won the Academy Award, and was one of the most prominent representatives of the Golden Age of Hollywood.

William Clark Gable was the only child of Adeline Hershelman and William Henry Gable. The boy was born in the city of Cadiz, Ohio, on the first day of February 1901. Clark's mother died of an epileptic fit a few months after the birth of her son. Gable was raised by his father and his second wife, Jennie Dunlap. The stepmother gave Clark music lessons. So, at the age of 13, the young man joined the city orchestra.

In childhood, the future actor was fond of Shakespeare which pleased Jennie and upset his father. William Henry Gable believed that his son would be sniveller because he showed no interest in male activities such as hunting or sports. To please his father, Clark studied vehicle configuration and became a good auto mechanic.

At the age of 16, Gable left school and began working in a tire factory due to financial difficulties. At the same time, the young man decided that he would become a good actor. Gable considered his height of 6.07 ft. (185 cm), dark hair, charming smile, and sharp look to be suitable for this profession.

In his youth, the future sex symbol of the United States worked as a newsman, a handyman at the theatre, a woodcutter, and a switchboard operator. When he took a crack at acting, Gable understood that his looks were not enough. At the age of 23, the young man married an experienced Broadway actress who helped him improve necessary skills.

Gable made his movie debut in 1923. The role was so small that the actor’s name was not even mentioned in the credits. Clark’s first work in the cinematography is considered the 1924 film White Man. For ten years, the actor played similar roles of villains and insidious women seducers. Gable was not embarrassed about these characters until he got tired of negative characters. He began to refuse offers.

The heads of the big movie studios didn’t like the actor’s whims, so they decided to teach the rising star a good lesson. Gable had to play together with Claudette Colbert in the romantic comedy It Happened One Night. The movie was filmed in a small unknown studio and did not promise Clark a good profit. History shows that Gable was resisting in vain. The film brought him the Academy Award, made the actor famous, and gave the opportunity to choose roles.

Directors began to offer Gable diverse roles, and women were all over "The King of Hollywood" wanting to be with him at least a moment. After shooting in It Happened One Night and until 1939, the actor played in 17 movies and was also nominated for the Academy Award again.

When the man was 38 years old, he had the high point of his career. Filming in the first adaptation of the epic novel Gone with the Wind brought Clark Gable and Vivien Leigh not only success, but also immortality. From generation to generation, women continue to go crazy for the on-screen Rhett Butler. The period of filming in the epic saga with Vivien Leigh was the happiest time in the personal life of the actor. The photos of young Gable still drive lovers of romance novels crazy because they see the actor as an ideal man and seducer.

Gone with the Wind brought Clark the third Academy Award nomination. After working on the adaptation of Mitchell’s novel, Gable appeared in 28 projects. One of the last works was the movie It Started in Naples in which Clark starred with beautiful Sophia Loren.

There was an interesting fact in the career of the actor. In 1932, he played the title role in the melodrama Red Dust. 21 years later, the remake entitled Mogambo was shot and based on this film. Gable got the leading male role again, but this time, Grace Kelly and Ava Gardner were the partners of “The King of Hollywood."

The actor always attracted women’s attention. Gable was married five times. It is even difficult to imagine the number of his office novels and short love affairs.

Gable married his first wife, Josephine Dillon, at the age of 23. The lived together for six years. Josephine was 37 years old when she married Gable. The first wife helped Clark to start an acting career and gave him the nickname "The King of Hollywood."

The actor married his second wife, Maria Langham, in 1931. She was 17 years older than him. The wife was very rich and helped Gable to debut on Broadway. A few years after the wedding, the actor became known not only for his professional talents but also for his love affairs. The spouses were married for eight years.

In 1936, Gable began a relationship with the woman who was called the love of his life. Being officially married, the Hollywood heartbreaker started a love affair with colleague Carole Lombard. For the sake of his beloved woman, Clark sacrificed half of his fortune, paying the compensation to his wife to take mutual consent divorce. After the dissolution of the marriage, the actor immediately married Lombard.

After the wedding in 1939, Clark was truly happy. The man said that he had nothing more to desire, since he achieved the stardom after the release of Gone with the Wind, and the woman he loved became his wife. The performer of the role of Rhett Butler planned to have children and a happy family life with Carol on their ranch. His dreams did not come true. In 1942, the actor's wife died in a plane crash, and the widower went to the war to die but came home safe and unharmed. Americans began to consider the actor a national hero.

Seven years after the death of Lombard, Gable married for the fourth time. His wife was actress Sylvia Ashley. The actor dreamed of becoming a father, but the young wife could not give birth to children. The couple lived on the ranch, which Lombard presented Gable. The fourth marriage lasted only three years. The family broke up when Sylvia, who was jealous of her husband’s deceased lover, tried to get rid of everything that reminded of Carole.

The fifth wife of "The King of Hollywood" looked like Lombard who died in 1942. Kay Williams and Clark Gable got married in 1955. The spouses lived together for five years. Kay was Clark’s only wife to give birth to his child.

Clark Gable did not participate in the upbringing of his children. It is known that the actor had an illegitimate daughter from a colleague, Loretta Young. A girl named Judy was born in 1935 under strange circumstances and placed in an orphanage. From the very beginning, the mother planned to abandon the child. But to hide this story, the actress took her to an orphanage to adopt the baby later. Loretta Young hid her pregnancy from the press and fans. For this reason, she had to use a tactical maneuver to raise Judy. The actress adopted her own daughter and misrepresent her as an adopted child for several decades.

For a long time, people believed that the girl was born after the love affair of Gable and his partner in the film. But when Loretta Young died, information appeared that Clark raped her. The actress claimed that she provoked Gable; therefore, she was partly to blame for what had happened. Loretta did not want these facts to go public during her lifetime. After Young 's death, one of the actress's relatives revealed the delicate details of her biography. Judy found out the truth about her birth only at the age of 31. The illegitimate daughter of the famous actors published the autobiography, in which she told the story of the forbidden love of Gable and Young.

Judy saw her father once in a lifetime. When she was 15 years old, the actor visited their home. Clark did not say a word that he was her biological father. Gable had a granddaughter, Maria, Judy's daughter, and great-grandchildren. The illegitimate daughter of the famous actor died in 2011. The cause of Judy's death was cancer.

The son of Gable and his wife Kay Williams was born a few months after the actor’s death. The boy was named John. American children usually have a middle name. Kay Williams' son was not an exception; he is known as John Clark Gable. The heir to the famous actor has two children.

After the death of Carole Lombard, it became known that she could have become the mother of Gable’s first child. Unfortunately, in 1940, the actress miscarried, and she decided not to tell her husband that she was pregnant. The information was made public after the tragic death of Lombard in 1942.

"The King of Hollywood" died during the filming of The Misfits. Gable's partner in this project was famous Marilyn Monroe. The actor had a heart attack a few days after the last scene with him had been filmed. Gable died in a hospital 11 days after admission.

The official cause of death was coronary thrombosis. The actor passed away on November 16, 1960. Shortly before the end of shooting, Clark joked that he was tired to death of working with Marilyn Monroe. He died at the age of 59. Gable's tomb is located at Forest Lawn Memorial Park in Los Angeles, near the place where Carole Lombard was buried.

In December 1960, a large international news agency conducted a survey. According to it, the death of Clark Gable was called the main event of the year, which marked the end of the Golden Age of Hollywood.