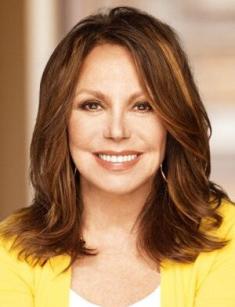 Margaret Julia Thomas was born in Detroit on November 21st, 1937 into the family of the comedian Danny Thomas. Her parents were originally from Lebanon and Italy, which is reflected in Marlo's unfading beauty. Her stage name was a mispronunciation of Margo, her short name in the family.

Later Marlo moved to Beverly Hills and graduated from the University of Southern California with a degree in teaching. Being an actor's daughter, she didn't initially plan to pursue a career in Hollywood. Nevertheless, her experience of working with children helped her later on in life, when she worked on many children's TV shows.

Thomas's movie career has spanned several decades. Most of her outstanding work continues to belong to the realm of television. Her big break occurred in 1965 when she came up with an idea for the series That Girl, in which she was to star for several seasons. The protagonist Ann Marie was a beautiful wannabe-actress dreaming of her big breakthrough on Broadway. For the first time on American television, a single, working woman became the central character. Despite Ann Marie's relationship with her boyfriend, the series did not end in their marriage, which caused some controversy. However, the series inspired many more similar shows.

Thomas continued to work in television, in Hollywood, and on Broadway. In the world-famous series, Friends, Marlo played the mother of Jennifer Aniston's character.

After a long-term relationship with Herb Gardner, Marlo Thomas was introduced to a popular TV host, Phil Donahue, in 1977. Three years later, on May 21, 1980, they got married, and Donahue relocated with some of his children to New York where he continued to host his talk show. Marlo became a stepmother to her husband's four sons and a daughter, forging a strong and lasting friendship with them.

Marlo Thomas is a gorgeous, energetic woman of average height but she is not immune to aging. In a bid to diminish its signs, she has undergone cosmetic surgery. She leads an active lifestyle to maintain her good health.

Marlo Thomas's appearances in movies include some of the much-loved titles, including Starstruck where she starred alongside Cher and Nicholas Cage; and Ocean's 8, where the cast included Cate Blanchett, Anne Hathaway, Sandra Bullock, and Elliott Gould. Her latest release is a Hallmark movie, A Magical Christmas Village, out in 2022.

In 1992, Marlo Thomas was awarded a Star on the famous Walk of Fame in Hollywood. In 1996, her tremendous TV career was recognized in the Women in Film Lucy Award. Her latest and highest honor came in 2014 when Barack Obama presented Thomas with the Presidential Medal of Freedom, the U.S. top honor for a civilian.