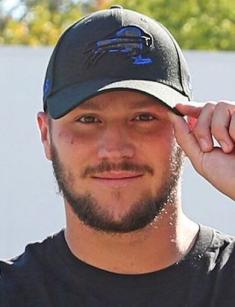 Joshua Allen is an American professional football player. He plays as a quarterback for the NFL team Buffalo Bills. He is mostly famous for setting passing records for yards and touchdowns and also leading his team to their first playoff win since the mid-1990s.

Josh was born on May, 21, 1996 in Firebaugh, California. The star grew up on a cotton farm near the town. During high school, he regularly attended Fresno State football games and camps. Josh hoped to attract the attention of the coaching staff and receive an athletic scholarship, but wasn't offered one.

Besides football, he played baseball and basketball. Allen also helped his family on the farm and gained multiple awards for his agricultural knowledge.

In 2014, he attended Reedley College, where he became one of the best players. Later, Josh received a scholarship offer from the University of Wyoming and joined them. In his first season, he was injured and got a medical redshirt. The player returned in 2016 and became a starter for Wyoming. A year later, he decided to participate in the 2017 National League's draft. His coach persuaded him to stay in college to improve his NFL prospects. In 2018, he was selected by the Buffalo Bills and signed a $21 million contract.

Allen began his career as Buffalo's backup quarterback but later became a starter. During a Week 3 match against the Minnesota Vikings, he led his team to their first victory in 2018.

In 2019, he became the captain and led them to their second playoff game since 1999. In 2020, the star set several passing records and led the team to their first divisional title and playoff victory since 1995. Joshua and Stefon Diggs are viewed as an unstoppable quarterback-receiver duo in the league. There is also a popular video where Josh hurdles a defender to throw a pass to Dawson Knox.

His girlfriend is Brittany Williams. She used to be a cheerleader for the University of California. The star is friends with quarterback Kyle Allen.

He is also fond of golf and takes part in various challenges. In 2022, Allen and Patrick Mahomes played against Tom Brady and Aaron Rodgers.

In 2020, Allen launched his cereal business. He also invested in his family's farm to plant pistachio trees. Helmets with Josh's autograph are sold in a range of online shops.