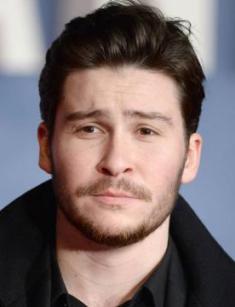 The Scottish actor, Daniel Portman, became famous overnight after the release of the fantasy series Game of Thrones. The role of Podrick Payne made the young actor a world-famous star, and the highly-rated project was renewed for the 8th season. Portman has starred in all the season since 2012. The acting of the outstanding man was praised by fans of the series and film critics.

The future star of Game of Thrones was born in February 1992 in Glasgow, Scotland, the fourth largest city in the UK. But the actor and his sister Naomi spent their childhood in the picturesque suburb of Glasgow, the village of Strathbungo.

A creative atmosphere reigned in the Portman family. His father is a famous actor, Ron Donachie (stage name). Donachie is well-known for small roles in the hit movies Jungle Book and Titanic. He starred in the TV series Doctor Who and Downton Abbey, in which the man played Mr. McCree.

At school, Daniel Portman did not differ from his peers; he was fond of sports, preferring rugby. The young man was a successful rugby player, and he dreamed of connecting life with sports and becoming a professional player. The plans collapsed when Daniel turned 16 years old. A broken leg put an end to the sports chapter of his biography, forcing him to think about another career.

After graduating from Shawlands Academy, the young man entered Reid Kerr College in Paisley, the homeland of the famous fellow countryman, Gerard Butler. There he earned an HNC in acting and performing. Daniel's sister decided to become a linguist, but the girl has also appeared on the set. Like her brother, she has inherited acting skills from the father.

The Scottish actor started an acting career in 2010 when Daniel was 18 years old. The novice artist was offered a bit part in the horror film Outcast, shot by English director Colm McCarthy. The horror film premiered in the middle of March.

The debut role did not turn the Scotsman into a movie star but gave the necessary experience that was useful next year on the set of the melodrama River City, in which Portman landed the role of Darren, a supporting character.

2012 was a turning point for the actor. Daniel Portman was offered a small role of the sniper’s friend in the English drama The Angels' Share, directed by Ken Loach. The filmmaker has become known for his socially critical directing style and won the Palme d'Or at the Cannes Film Festival twice. Paul Brannigan and John Henshaw played the title characters. The movie won a prize at the Cannes Film Festival and was nominated for the César and Magritte Awards.

However, it was not his main project. The American drama series Game of Thrones made Daniel Portman famous. David Benioff and D. B. Weiss’s fantasy film is based on a series of novels by the American science fiction writer and producer, George R. R. Martin. The project was shot in the north of Ireland, then in Iceland, Morocco, and Malta.

The series premiered in the spring of 2011. Daniel Portman joined the cast in 2012. He landed the role of a charming squire, Podrick Payne. The Scottish actor coped with the task brilliantly, increasing the number of fans. Daniel became famous overnight; people began to recognize the artist on the street and ask for an autograph.

Portman shared with reporters that it was comfortable to work on the set of the series, despite the multinational cast. The actors communicate in English, but they have accents. The project featured a Russian actor, Yuri Kolokolnikov, who got a bit part. Daniel matured, alongside his hero, Podrick. The actor first appeared on the set of Game of Thrones at the age of 19, and he turned 24 years old in the seventh season.

Answering the questions about the collaboration with his partner Gwendoline Christie, who played Brienne of Tarth, the Scottish actor replied that Gwendoline was a wonderful and easygoing person. In the series, the actress portrays a confident and purposeful heroine. According to Portman, his older colleague taught him many secrets of the profession. Christie’s filmography includes a prominent role in the space opera Star Wars.

In the summer of 2017, viewers saw all seven seasons of the project. The eighth and final season will be released in early 2019.

The Scottish actor's career continues to take off. Millions of viewers know and love Daniel Portman. There is little information about the private life of the English star. Portman is not married and does not have a girlfriend.

In his free time, Daniel watches documentaries and enjoys playing computer games, including his favorite Uncharted, Assassins creed and The last of Us. As for his musical preferences, he likes everything from classical music to rap. But Portman highlights the bands The Rolling Stones and Die Antwood.

The actor has said that he would like to portray the title character of The Godfather, Don Corleone, who was brilliantly played by outstanding Marlon Brando.

In 2017, the star of Game of Thrones visited St. Petersburg, where he came to the Comic Con-Petersburg festival. Portman was delighted with the city on the Neva river, and the northern Russian capital reminded him of his native Scotland, where the rains also did not stop.

People recognized Daniel Portman and asked him for a photo on the streets of St. Petersburg. In Russia, there are many fans of the cult series, which pleased the actor a lot.

Fans learn about the news of the life of their beloved artist seeing new photos that regularly appear on Portman's Instagram page. In 2018, subscribers saw pictures of the filming of the final season of Game of Thrones.