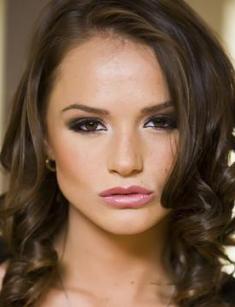 Unfortunately, Michelle's biography is full of white spots. It is not known where her mother and father worked and how they raised her. It is no secret that Michelle's parents still live near rainy Seattle. Chapman grew up an energetic child, was fond of dancing, and also played football with the boys in the yard. But she didn't get along with the girls. Besides, the future actress became addicted to men's sport. In her spare time, Michelle honed her strikes on a boxing pear.

In one of the interviews, the actress admitted that the first time she kissed when she was only 5. At that moment, she was sure that she would marry a boy, and they would have children.

The first sex happened in her school years. She told journalists about it in an interview. On that day, her parents left home somewhere, and the girl decided to invite her ex-lover to visit her. As a result, Michelle initiated the loss of her virginity but admitted that the "story" was disappointing.

A young man drove 17 km for this purpose. But the process took no more than 5 minutes. The girl said she was incredibly bored. After 20 minutes, the guy offered to try again. Michelle drank a little. She drank alcohol for bravery, so she agreed. But even this time it wasn't better. When her parents came back two hours later, she was watching TV as if nothing had happened.

Pornodiva does not hide the fact that the Chapmans did not live well, so she had to earn her own money for education (she studied journalism at Western Washington University). At the age of 18, Michelle went on vacation to picturesque Florida. Her parents advised her beloved daughter to find a job to pay for the student hostel, so she went to nightclubs to be a go-go dancer. However, she was not accepted to this position, because the girl is under 21 years old.

Chapman began to work as a model. Fortunately, she was given both a beautiful figure and a bright appearance. With a height of 5 ft 9 in (1.75 m), her weight is 141 lb (64 kg). However, this money was not enough, so Michelle decided to send her own frank photos to an agency for adults, which she found by chance in an ad with a catchy headline: Do you want to earn $ 20 thousand a month? Initially, the girl worked as a porn model and then began to participate in the commercials. So began her "hot" creative biography on the vast expanse of the sex industry.

The first serious stage in Tori's career took place in December 2008 when she was the Penthouse Pet of the Month.

Acting talent came to Tori Black, by the way, when she was offered to act in a regular movie. For example, she performed an occasional role in the series Ray Donovan.

In 2015, the actress appeared in the horror movie L.A. Slasher, which tells about a ruthless murderer who "removes" the glamorous stars of TV screens to find out whether the world will be at least a little better without a TV fake. In addition to Black, the cast included: Andy Dick, Mischa Barton, Danny Trejo, and other famous stars.

Not much is known about the actress's private life. Tori prefers not to publicize family things. In the autumn of 2011, it became known that the star of adult movies gave birth to a boy, and in the winter of 2013, she announced on her official website that she was expecting another child.

Well, I don't think you'll find any pictures of her with her kids or her husband in her account. By the way, it is still unknown whether she is married to Lyndell Anderson, or they have not registered their relationship.

Surprisingly, the girl has natural breasts, the usual size two (68cm). And in general, she is not a fan of plastic surgery, her appearance is natural.

Also, in 2017, Tori decided to talk to fans and answer all their questions. The conversation lasted an hour, and the actress tried to be as honest as possible.

One of Tori Black's subscribers asked if her family or friends had turned their backs on her after discovering her profession. The girl confessed that this had happened in her life. But she doesn't blame her family and friends. She understands that this is the cost of the profession. The 21st-century society has labeled the sex industry and is not ready to perceive pornography as an art form.

She also said that quite often strange men send her naked pictures. This is also considered a professional cost.

Tori Black with the Vixen Angel Award in 2018