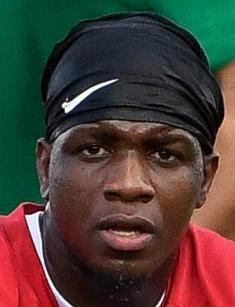 Mohamed Sanu is an American football wide receiver for the New England Patriots of the National Football League. The sportsman made his NFL debut in 2012 for the Cincinnati Bengals. He is also famous for helping the team Atlanta Falcons to reach Super Bowl LI in 2017. Let’s have a look on how the sportsman reached such excellent results.

The gifted sportsman was born in Sayreville, New Jersey, USA. He was raised in a Muslim family. When he was a child, Mohamed spent some time with the family in native Sierra Leone; it is a country on the southwest coast of West Africa. He has a sister and a brother. His father is a professional athlete, so perhaps, Sanu was inspired by him to start a career as a sportsman.

When Mohamed returned to the United States, he played at South Brunswick High School as a triple-option quarterback. After that, in 2009, he entered Rutgers University. The young player contributed to the Vikings win against Edison High School. Mohamed finished high school earlier that he was going to, and after that began to study at Rutgers University.

Mohamed started his college career as a wide receiver for Rutgers. Rapidly, he proved to be a very skillful player. He received Most Valuable Player honors in 2009 and was considered to be a consensus preseason All-Big East wide receiver in 2010.

Sanu became a member of the Cincinnati Bengals in the 2012 NFL Draft, when he signed a four-year contract with them.

In 2012, against the Washington Redskins, Mohamed became the first Bengals wide receiver ever to throw a touchdown pass. At the end of the 2012 season, the player had surgery to repair a stress fracture, and had to leave the team to recover.

Among the 2013 highlights, there are 16 games in which the player demonstrated his football skills.

In the 2014 NFL season, Mohamed had a chance to demonstrate his talents. He managed to prove it when he made his fourth completion of his career on four passing attempts and second touchdown pass of his career.

In the 2015 NFL season, Mohamed scored his first career rushing touchdown on a 25-yard reverse against the Cleveland Browns.

In 2016, the sportsman had a new contract with the Atlanta Falcons. The sportsman debuted in a game against the Tampa Bay Buccaneers.

In the 2017 NFL season, Sanu performed well and led the team to the victory over the Green Bay Packers.

After a slow start to the 2018 season, during Week 17 Sanu threw a five-yard touchdown pass to quarterback Matt Ryan against the Tampa Bay Buccaneers, the fourth of Sanu's career.

In 2019, the player was traded to the New England Patriots. He played a great role playing for his previous team. One of the best moments of 2019 was when Sanu along with left tackle Jake Matthews made two significant blocks to allow Julio Jones the space to run. It was a great play call against the Eagles’ pressure.

After Sanu has changed the team, many of his teammates expressed their gratitude for great performing in the field. However, Calvin Ridley was likely to see an uptick in his usage rate as a result of Mohamed's departure. Although, Calvin was speaking about what Sanu meant to him as a mentor, he downplayed his role change.

When it comes to arm strength, Sanu is among the best players in the NFL. He is very talented as a passer. His throw of 71.5 yards was better than 28 starting quarterbacks in the league, including Matt Ryan, who topped out at 62 yards through the air. Sanu’s throw was also further than Tom Brady’s, Russell Wilson’s and Cam Newton’s.

The player has completed seven of his eight career pass attempts for 233 yards and a whopping four touchdowns. For his career, Sanu has a perfect 158.3 passer rating. Mohamed Sanu is currently being drafted in round 12.7, with an average draft position of 143.4.

Sanu is now known to be single. He was engaged with wife Lauren Mackenzie. In February, 2016, during a football match between Liverpool and Manchester City, Sanu proposed to his girlfriend in the most romantic way at London’s Wembley Stadium. Laurence gifted him a son – a four-year-old boy Mohamed Sanu Jr. However, after several years spent together the duo split up.

Sanu had another serious relationship. The player has been dating Dani Lee, a fashion entrepreneur. But in summer, 2019, there were talks about their breakup. Fans of the player got to know about that when they noticed that Sanu started deleting all photos with his “ex-girlfriend” on his social media. On his Instagram account, the sportsman has over 330,000 followers. As for now, there many photos with Lee on his page, so, it's possible that the two may renew their relationship.

Mohamed is a fan of soccer, and supports West Ham United.

Sanu has an estimated net worth of $5 million. The sportsman has had career earnings of $23.7M over seven seasons, which ranks him among active NFL players entering 2019.