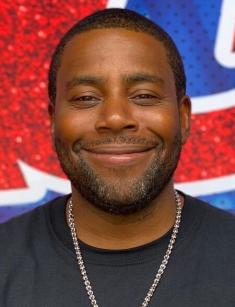 Kenan Thompson who was born on May 10, 1978 is an American comedian, film, television and voice actor. Famous for being the long-tenured cast member of the NBC late-night live sketch comedy show Saturday Night Live, he initially gained popularity for portraying Kenan in the Nickelodeon situational comedy Kenan & Kel.

The star hails from Columbus, Ohio. His family relocated to Atlanta, Georgia, shortly after his birth. Kenan's father's name is Fletcher. His mother's name is Elizabeth Ann and she works as a nurse. The comedian also has two siblings. He has been passionate about comedy and acting since a very young age and was known among his peers for impersonating famous comedian Bill Cosby.

The future SNL star began his career as an actor when he appeared in the 1994 sports film D2: The Mighty Ducks. In the same year, he also landed a main role in the Nickelodeon sketch comedy TV series All That. One of the most well-known series sketches was called "Ask Ashley" and featured young Amanda Bynes. Two years later, Kenan and his All That co-star Kel Mitchell began starring in their own comedy series Kenan & Kel. The show lasted for 4 seasons, from 1996 to 2000.

Thompson is also a voice actor. He is known for the educational animated series Nature Cat and animated musical comedy Trolls World Tour.

In 2003, the former Nickelodeon star joined the team of the long-running sketch show Saturday Night Live. He later confessed that he tried to become a part of the show many times before, but his audition tapes were always dismissed because he "looked too young". Kenan has been an indispensable part of the SNL team for twenty seasons. His celebrity impressions on the show include Steve Harvey, Whoopi Goldberg and OJ Simpson. Thompson's most notable SNL co-stars were Andy Samberg, Jason Sudeikis and Amy Poehler.

In 2018, the comedian received the Outstanding Original Music and Lyrics award for the lyrics to "Come Back Barack" song, which he wrote with stand-up comedian Chris Redd. Thompson's work on the show also earned him a Primetime Emmy Award.

In November 2011, the SNL star and model Christina Evangeline got officially married. The couple had two daughters together. In the spring of 2022, it was revealed that Kenan and his wife separated approximately twelve months ago. In July of the same year, the comedian filed for divorce.

As of November 2022, Thompson is rumored to be dating 19-year-old Musician Aria Lisslo.

The comedian is good friends with actor and rapper Nick Cannon, who was his All That co-star. Thompson also guest-starred in The Nick Cannon Show, which was one of the three All That spin-offs.

From 1994 to 2022, Kenan Thompson appeared in 100 movies and TV shows. His selected filmography includes: