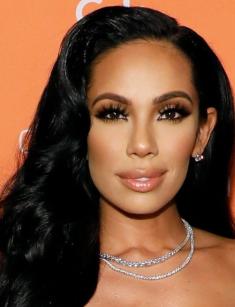 She is a skilled model, actress, and writer. Despite unhappy and troubled childhood Erica managed to get success in the entertainment industry and build a family.

The model was born in New York in a dysfunctional family. Her father was a drug dealer, and her mother peddled drugs and was prisoned. Erica's mother gave her birth in jail. When her mother was in prison, Erica lived with her father, which brutally abused the little girl. When she was five, her mother went out of jail.

There is not much information about her childhood, as well as education and academical achievements. It is known that as a child, she was interested in modeling. Her ethnicity is mixed. She holds American nationality.

When she was fourteen, her modeling career began. At that time Erica took part in the beauty competition and won it. That victory allowed her to gain some popularity and recognition. She began working with several modeling agencies.

Her TV debut happened in 2005 when she appeared as a leading lady in Chris Brown's musical video.

However, she wasn't recognized by the public until her appearance in the reality show "Kourtney and Khloe Take Miami." It was up to the show to bring her breakthrough. It was 2009 year when Erica achieved full recognition and became a star. After the successful show, Erica worked on several career-changing projects, "Love&Hip-Hop: New York" among them. The show chronicles the lives of several people from New York, besides Erica, her husband Saffaree and the rapper Joe Budden took part in the show.

Besides her modeling and acting careers, Erica proved to be a skilled author. Her books "Underneath It All" and "Chronicles of a Confirmed Bachelorette" became bestsellers.

Her net worth is estimated at $3million. Erica enjoys watching Hollywood movies. Her favorite actors are Will Smith and Vanessa Hudgens. Besides, she is mad about Chinese dishes.

Erica is known for her multiple relations. She dated Bow Wow and Chinx Drugz. The model was spotted staying in romantic relationships with DJ Envy, Fabolous, Clifford Dixon. Erica and the former were arrested when their argument grew into domestic altercation one day. Her boyfriend died when Dixon celebrated his birthday and was shot in front of the club.

She also proved to be bisexual as she dated a girl name, Cyn Santana, her co-star in the reality show.

But now Erica has got a long relationship with the rapper Safaree Samuels who previously dated with Nicki Minaj. The couple was engaged in 2018 when the rapper presented Erica 14 carat diamond engagement ring. They got married on October 7 in 2019. The wedding was held in the castle in a blowout ceremony. Their wedding was close. The twosome invited only relatives and close friends.

In October 2019, they announced that Erica was expecting a child. Erica wrote a touchy letter to her unborn daughter on her Instagram.

In recent years the model radically changed her diet and became a vegetarian.

The primary source of financial income is Erica's profession. Through her career, she earned a decent fortune. Her net worth is estimated at $4 million. She is active on social networks, among them Instagram and Facebook.