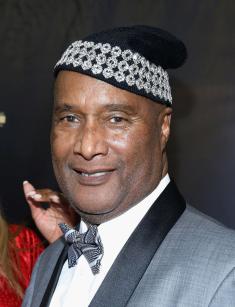 The American actor specializes in the genre of comedy. He became the on-screen character who appeared on popular TV shows. Besides, he composes jokes for the favorite entertainer.

At the age of seven, the boy moved from Louisiana to California. His grandmother raised him. His stage name, Mooney, came from his childhood. 'Paul's mother called him Mooney in honor of Scarface actor.

His path to comedian career started on the Carnival where he worked as a ringmaster and showing his first comic jokes. This experience helped him to get the first professional work as an essayist on the TV show. He did his job brightly and uniquely and proved to be successful in the entertainment industry. His talent was evident for TV agents, and soon he began composing satires for the most famous and successful shows on the screen.

The notorious fame has followed the actor for years. One of the biggest gossips is connected with 'Paul's work on Richard Pryor, whose bodyguard accused Paul had a sexual bond with the 'Pryor's son. This news shocked Richard who told that he would pay $1 million to kill Mooney.

Paul ignored rumors about his sexual orientation and focused on his personal life.

At the age of 78, he continued a career as a stand-up comic. His stand-up comedy is devoted to current problems, often concern political news and the most prominent figures – Barack Obama, Donald Trump among them.

Besides work as an essayist, Paul often became a comedian actor starring in various satire films.

Sometimes he crossed the boundaries. As a result, offended and embarrassed people being on the spotlight. For example, he created the Award whose stars became African Americans with legal troubles. The comic crudely joked Diana Ross and mentioned her dead husband. Later he stated that his behavior was reasonable, and if celebrity crossed the law, she should be ready to become a subject of satire.

This accident is not the only controversial moment in his career. In 2013 after several days after bombing on the marathon in Boston the actor said that people deserved it: "deserved what they got and (it was) OK to lose a few limbs... as long as no blacks got hurt it was OK."

In 2006 he stated that he refused using the N-word in his performances. But during the show at the Lincoln Theater, after hours of jokes, he accidentally pronounced it. The comic fled from the stage covering his face in hands. Some minutes later he returned on the scene.

The actor has married once, and this marriage, his wife gifted him, four children. But the marriage was broken. He is active on Instagram and Twitter. The actor had a long-lasted relationship with the singer Chaka Khan.

• 2006 Know Your History: Jesus Is Black; So Was Cleopatra

He shared his experience and way to success in an autobiography, which was released in 2010. The name of the book is "Black is the new white." The book proved to be thrilling and became a best-seller.