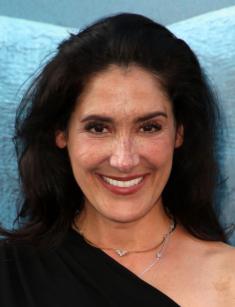 The Huntington native, Alicia Coppola, started her acting career in the early 1990s. Since then, Coppola has established a successful and long career as an actress with countless credits, which included several TV shows like Trinity, Cold Feet, Bull, Jericho, plus recurring roles on The Young & The Restless, Shameless, Empire, and Why Women Kill. In 2007 Alicia starred in adventure movie National Treasure: Book of Secrets alongside Nicolas Cage. In 2019 the actress tried herself as a director, filming her book. Coppola is married and has three daughters. According to several sources, her net worth can reach $3 million, including all of his properties and earnings.

The birthplace of Alicia was the Town of Huntington, located in Suffolk County, New York. She was born to her parents on April 12, 1968. Alicia doesn’t belong to the famous Coppola family, an Italian-American family of filmmakers and performing artists. And Francis Ford Coppola is not her relative, as a lot of people believe.

When Alicia was 13 years old, her father was diagnosed with brain cancer. He fought the disease while his daughter grew up. Alicia attended the private, co-educational college preparatory school in Kent, Connecticut, until graduation in 1986. Then she continued her education at New York University. Several years after she earned a bachelor’s degree, her father’s illness ended fatally.

The career’s beginning. Another World

Coppola made her first strong impression on TV at the beginning of the 1990s, when the actress was set as a hostess on MTV’s game show. In 1991 she made a breakthrough, starring on NBC’s soap opera Another World. The newcomer brilliantly played Lorna Devon, who was far from a nice girl and very raw. However, it was a very difficult time in Alicia’s life. Her father died in January 1991 after a ten year battle with brain cancer. Soon Alicia went to the audition for Lorna, and the actress was kind of bitchy to the people there.

When the crew hired Coppola, they asked her if she was a bitch. Coppola answered that if they were going to have a problem. Despite that Lorna in Coppola’s performance turned out to be the perfect storm. According to the actress, her father gave her that role so she could get out all that she was feeling.

The other advantage of Alicia was her different look, as she was one of the first actresses then, who wasn’t black, Hispanic, Asian, or Caucasian. She was of Italian heritage. In some way, the character worked and was so popular because of Coppola the person that was not always represented on the soaps. The actress portrayed Lorna successfully next two years.

After only a few years, Alicia decided to leave the soap opera. Describing the decision, Coppola reported that she wanted to get on with her career, and she didn’t know how much more she was interested in playing that character. According to the actress, she felt like she had completed the whole character's story. Awarded as the Outstanding Younger Leading Actress, Coppola decided to go out on a high note and left the project.

Over the years, Coppola landed guest appearances on such series programs as Star Trek: Voyager, NYPD Blue, The Sentinel, Trinity, and Sports Night. In 1999 – 2005, she portrayed Karen Chandler in the first season of Cold Feet, Marissa Rufo, in the first season of Bull, Toni Stark in Dawson Creek, Nancy in American Dreams, and Ryan Kessler in Crossing Jordan.

In 2006 the Huntington native joined CBS’s TV show, titled Jericho. It was akin to Another World, where Alicia made a lot of friends. Jericho was an American post-apocalyptic action-drama TV series, which centered on the residents of the fictional city of Jericho, Kansas, in the aftermath of a limited nuclear attack on 23 major cities in the contiguous US.

Coppola portrayed Mimi Clark, an Internal Revenue Service (IRS) agent from Washington, who visited Kansas on an audit mission after the major cities fell victim to nuclear attacks. Mimi was a damaged character, but she was funny. That was the first time anybody let the actress had her sense of humor on a show, and let her be the funny girl in a drama.

A year later, Jericho’s executive producer, Jon Turteltaub, invited Coppola to appear in his National Treasure: Book of Secrets. Alicia was an FBI Special Agent Spellman and had a chance to work with the masters Nicolas Cage, Jon Voight and Harvey Keitel. A year later, after the movie was released, the actress left Jericho. In 2008 she participated in a very unusual job. She became the voice of She-Hulk, a character of Activision’s video game, Marvel: Ultimate Alliance 2.

In 2009 – 2016, the actress continued making short appearances on various TV shows. She succeeded in working on Lifetime, Fox, CBS, ABC, and USA Network. In 2010 Coppola signed on to guest-star on a Season 2 episode of NCIS: Los Angeles. She played FBI agent Amy Rand, an expert on kidnapping cases. Described as athletic, determined and authoritative, she worked with the NCIS agents to find a victim to prevent a killing spree. Amy appeared in four episodes in 2010, 2015-2016, and 2018.

In 2016 Alicia Coppola joined the cast of Cowgirl’s Story, a military family drama from actress-producer Bailee Madison. Coppola appeared as Lt. Helen Rhones, a helicopter pilot in Afghanistan and mom to Madison’s Dusty Rhodes. The movie told the stories of high school cowgirls holding down the home front while their military parents were on duty in Afghanistan.

Shameless and The Young and the Restless

In 2016 soap fans were delighted with the news that Coppola was returning to her daytime roots in a recurring role on CBS Daytime’s The Young and the Restless. And it was not just any role that brought Coppola back to the genre that she had great admiration and appreciation for; it was that of the mysterious Dr. Meredith Gates, the prison physician who was overseeing the care of in-the-slammer billionaire, the ruthless Victor Newman (Eric Braeden).

The same year the actress got a recurring role in Showtime’s Shameless. She played a character that surprised people, Sue. It was not one she had had the great fortune to have played before, but funny enough, it was very close to who Alicia was, according to her interview. She appeared in comedy-drama in 2016 – 2018, in seasons 7-8 and then left the TV series.

In 2018, just left Showtime, Alicia continued to make a name for her in the world of primetime. Not only did she nab a series regular role on the CBS series Blood and Treasure earlier that summer, but she also just landed a recurring role on the FOX hip hop drama Empire. According to Deadline, Coppola played a smart, flamboyant attorney investigating Lucious Lyon (Terrence Howard) and international money launderer Damon Cross (Wood Harris). She did almost anything for big target convictions because she believed they took her to the Governor's mansion and then the White House.

In March 2019, the actress took to social media to let fans know she was beyond thrilled for her debut on the music industry-themed primetime drama. Her post also revealed the name of her Empire character: Meghan Conway. Empire centered on a fictional family that founded hip-hop music and Entertainment Company and the drama that ensued as they fought for control of it.

In 2019 Coppola was involved in highly rated CBS All Access’ Why Women Kill, a darkly comedic drama from Desperate Housewives creator Marc Cherry, Imagine Television Studios and CBS TV Studios. Created by Cherry, Why Women Kill detailed the lives of three women living in three different decades — a housewife in the ‘60s, a socialite in the ‘80s, and a lawyer in 2018 — each dealing with infidelity in their marriages.

The series examined how the roles of women had changed but how their reaction to betrayal had not. Alicia played Sheila, a Sheila Mosconi, Rob and Beth Ann's neighbor, and Leo's wife, who befriended Beth Ann. Sheila broke all of society’s norms.

In 2019 Coppola completed her movie Between Us successfully and truly with a list of first-time production credits, including screenwriter and director. Her movie was a story based on real-life, stemming from the death of her father. It was truly a family love story. It began in love, was shot with love and told the ultimate love story of a child and a parent. Alicia Coppola and her husband performed the roles of themselves. Between Us was inspired by the book Coppola wrote in 2013, Gracefully Gone. It was a love story between her father, Matt, and herself.

Alicia is married to her long-time boyfriend, Anthony Michael Jones. Her husband is an actor, writer, and producer. His net worth is also about $3 million. Alicia has three daughters with him namely, Mila Roselena (2002), Esme Marlena (2008) and Greta Helena (2010).

When Coppola was pregnant with their first daughter, her husband built her a beautiful changing table by necessary measurements out of gorgeous mahogany, with a door to storage on the left side for the Diaper Genie and two spacious shelves on the right for diapers, wipes, etc. Three babies were changed on it. Currently, it lives in their dining room, and instead of baby stuff, it houses all their stemware and booze. So, it is the so-called home bar.