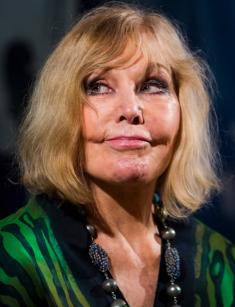 She is an American actress who was incredibly popular in the 50s. Today the 86-years-old Kim is more focused on painting and family life. She is a wanted guest of the art show and lovely star of both ordinary people and celebrities who draw inspiration from her image.

The actress was born into a full family. Ethnicity is Czech. The girl was raised in Catholic belief. Thanks to her vivid acting talent, she won two scholarships in the art institute.

In the 50s, the actress gained full success and popularity. She was demanded actress and appeared on the number of movies at that time.

As a teenager, she began working as a model and tried her hands at the auditionof movies. The young and beautiful actress attracted attention of the skilled agent. The agent instructed her to lose weight and change her name. Then the actress adopted the given name but insisted on keeping her surname.

Such kind of transformation positively reflected in her position in Hollywood. The actress received some leading roles in a variety of movies. Thus she starred alongside Frank Sinatra in "The Man with the Golden Arm." The other movie, "Picnic," turned out to be her breakthrough. That role was somewhat challenging as the actress needed to show that pretty woman is something more than an appealing object. The actress faced such kind of problems in her real-life that's why her playing was so sincere and penetrating. She earned the nomination for her role.

The public remembered her for her dual performance in the psychological thriller of Alfred Hitchcock "Vertigo." In 1958 the legendary director worked on his new picture when his actress became pregnant and had to refuse from the role. The complex role was suggested to Novak. That time she was striking against Columbia. The actress earned $1,250 per week. Kim demanded the raising of her salary and refused to appear on the set of "Vertigo." As a result, she received $3,000 a week.

In the 60s, the trajectory of her career began radically changing after her appearance in a series of unsuccessful pictures, "Kiss Me, Stupid" and "The Amorous Adventures of Moll Flanders" among them. That time the agent who supported her career and had much to do with professional struggles died.

Unfortunately, the actress didn't repeat the success of her early career. In 1991 she worked on the picture "Liebestraum" and came across a lot of disagreements with the writer-director. The actress enjoyed the script and was eager to portray an ill writer with a mysterious past. She wanted to play the whole character. However, the director considered that she wasn't able to describe the flashback role and hired the other actress. The actress was deeply disappointed as her, and the director's visions were too opposed. The actress said, "It was such a painful thing for me because it took me right back to Harry Cohn and all that time. And back into reporting, Look, for God's sake, haven't you heard it enough? We don't want you to do anything. Just be 'Kim Novak.' That movie pained me more than any movie in the world could do." She was so exhausted that she decided to retire from acting.

After her retirement, the actress turned down most of the offers and preferred rarely appear on the public eye.

In 1965 she married the English actor Richard Johnson. It was a brief marriage which lasted for 13 months. The actress was romantically linked with some celebrities. Thus, the list of her boyfriends included Frank Sinatra, Michael Brandon, and Jimmy Stewart. In the 60s, she decided to reside in Bug Sur. The new residence allowed her to focus on raising horses and painting.

In 1976 she married the veterinarian Robert Malloy and obtained two adult stepchildren.

In 2010 the official reported the actress suffered breast cancer. The doctors said that she had a fantastic shape and soon would recover. Later she was declared cancer-free.

In 2014 her appearance on the public emerged broad discussions about her look. There was much speculation that she underwent cosmetic surgery. The criticism very hurt the actress. Kim wrote an open letter were told that she "had fat injections in my face" as she felt "they seemed far less invasive than a face-lift," but later regretted it, "So why did I do it? I trusted somebody doing what I thought they knew how to do best. I should have known better, but what do you do? We do some stupid things in our lives."

In the latest decades, Kim mostly focused on paintings. She gave much of her work for the Institute of American Arts. Moreover, in 2019 she held the art show in Palm Springs. Kim preferred not to sell her paintings as they mean too much for her.

Today the actress continued to stay in a marriage with her husband. She said that her husband "doesn't identify me as "Kim Novak" at all." That fact helped to keep their relationship. Now, at the age of 86, she continued to create and take care of animals.

Her net worth is estimated at $15 million.