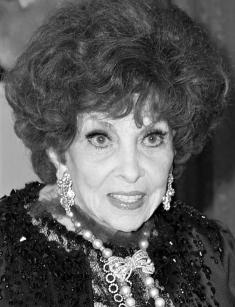 This lady was born on July 4, 1927 in Subiaco, Italy, as Luigia Lollobrigida.

Her mom's name was Giuseppina. Her dad's name was Giovanni, he made furniture. She had one elder sister Giuliana, and two younger ones, Maria and Fernanda.

Initially, Gina wasn't planning to follow this professional route. She studied sculpture, photography and painting. Two of her sisters worked as movie theater ushers to pay for her classes. Then, Gina traveled all around the world to take pictures to great critical acclaim.

This lady switched to acting after modeling for photoshoots and magazines under her Diana Loris alias. She won several European beauty contests.

In some of her best movies, young Gina was dancing in a dress with a corset. Female spectators wanted to get to know her beauty secrets. She rose to stardom after the Second World War when Italian movie makers were glorifying the traditional Mediterranean beauty.

The Cardiacs rock band named one of their songs after her.

In 1999, the actress failed to become a member of the European Parliament. In 23 years, she failed to join her homeland's Senate.

In 1949, the star tied the knot with Milko Skofic from Slovenia. Her husband used to be a physician but switched to being his wife's manager. In 1957, the couple welcomed their only son, Andrea. The actress never had other children. This marriage ended in 1971. During these years, Gina had at least one lover — Christiaan Barnard, a surgeon.

In 1984, she began a relationship with Javier Rigau y Rafols, a businessman from Spain. He was 34 years younger than her. In 2006, they allegedly wanted to walk down the aisle but changed their plans.

During all her life, Gina was surrounded by admirers.

Gina breathed the last gasp on January 16, 2023 in Rome. During her last years, she was suspected to be mentally incompetent. Many of her surrounding people were striving to get a part of the great actress's fortune.

Here are just a few examples of Gina's must-watch works: