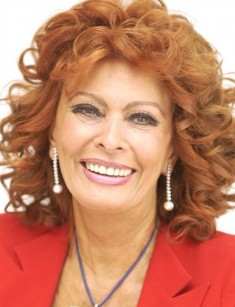 Sophia Loren is an Italian actress and singer. She is the owner of numerous awards and prizes of the international film festivals. She is often called the embodiment of the charm and sensuality.

Sophia Loren (a real name - Sofia Villani Scicolone) was born in Rome, but she didn't spend her childhood here. Sophia's mother Romilda Villani moved to the capital of Italy to try herself on the stage, the woman was dreaming of becoming a singer or an actress. Bu, the acquaintance with Ricardo Scicolone, changed her plans. When he learned about the pregnancy of his beloved woman, the man recognized his paternity, but he refused to marry her.

That’s why right after the birth of her daughter Romilda returned to her native town of Pozzuoli which is situated in the suburbs of Naples.

The future actress grew a thin girl, being ahead of her peers in her height. Therefore she got the nickname of "Perch." When the girl turned fourteen, she took part in the local beauty pageant called The Queens of the Sea. Sophia didn’t win the contest but entered the dozen of elected princesses and received a couple of prizes, and, above all – the ticket to Rome to pass the casting. Two years later at the Italian beauty contest, Sophia got the title of Miss Elegance which was invented by the jury particularly for the young senorita.

At first, the actress had to perform small roles in the sappiest movies Zorro's Dreams, Barbablu's Six Wives, It Was Him!... Yes! Yes!, Two Nights with Cleopatra and I Dream of Zorro. The actress took part in this pictures under the pseudonym of Sophia Lazarro. In 1953 the famous producer Carlo Ponti offered the girl to change her surname to Loren as it was accordant with her name and also sounded close to the surname of the Belgian actress Märta Torén who was at the peak of her popularity at that time. But Ponti hasn’t stopped with the change of the pseudonym. The movie producer has helped Sophia to get rid of her Neapolitan accent and has imparted to her the interest in dramatic literature. Moreover, he has taught her this well-known walk with swinging hips and has changed her make-up style. The only thing which Sophia Loren refused to do was the rhinoplasty.

All these changes have quickly brought results. Sophia Loren has become a famous actress after the following movies came out: Attila, The Gold of Naples, Two Women, Yesterday, Today, and Tomorrow, Marriage Italian Style, Houseboat and Sunflower. Anthony Quinn, Cary Grant, Jean-Paul Belmondo, and Marcello Mastroianni became the partners of the actress on the movie set. Her duet with Mastroianni is still considered to be best one in the history of world cinematography.

Since the end of the fifties, the Hollywood producers and directors have started to invite the actress to take part in the shootings of different movies. Loren accepted the invitations almost every time, but the acting of the Italian actress in Hollywood pictures hasn’t received enthusiastic reviews. In Europe, Sophia Loren has managed to achieve more success. During the next fifteen years, the actress has been working almost with all cult actors of the American cinematography.

The spectators have especially remembered her joint roles together with Frank Sinatra in the movie The Pride and the Passion, with Clark Gable in the romantic comedy It Started in Naples, with Charles Chaplin and Marlon Brando in the film A Countess from Hong Kong which became the last work for the outstanding comic. Moreover, Sophia Loren took part in the shootings in a company of Anthony Perkins in the melodrama Desire Under the Elms, Paul Newman in the psychological picture Lady L, Richard Burton in the melodrama The Voyage and also with Jean Gabin in the picture Verdict.

By 1980 Sophia Loren has become the world-famous movie star. The American director Mel Stuart invited the actress to play the cameo role in the picture Sophia Loren: Her Own Story.

The biographers and researchers of Sophia Loren's life notice that the successful pictures with the participation of the actress were released in the period from the fifties to the early eighties. This was the best time in the career of Sophia Loren. Later there were fewer movies even though the Italian actress was still very talented. In the nineties, there was released the film Prêt-à-Porter in which Loren and Mastroianni appeared together for the last time. Soon there also came out the movie Grumpier Old Men and the biographic picture Soleil directed by Roger Hanin. Besides, the movie critics repeatedly noted the musical Nine which was a remake of the movie 8½ directed by Federico Fellini and the leading role of Olivia in the picture Between Strangers.

The episodic role of Angela in the movie of 2014 under the title The Human Voice is the latest work of the Italian actress in cinematography.

Sophia Loren has received many proposals, but the actress was married only once to Carlo Ponti who has discovered the talent of Italian actress to the world. And this marriage wasn’t officially recognized by the country’s authorities. Senior Ponti had been married before, and under the Catholic laws, it was impossible to file for the divorce. The couple has officially registered their relations in Mexico what has caused the criticism from the Catholic church. The wife and husband had lived together till 2007 when Carlo Ponti died.

Sophia was dreaming of having children, but for a long time, she couldn't become a mother. At the age of thirty-eight, the actress gave birth to their firstborn - Carlo Ponti Jr. Four years later she gave birth to her second son – Edoardo. Both of her sons have become popular. Carlo is a conductor, and Edoardo has followed in the footsteps of his father and has chosen the job of the movie producer.

Sophia Loren has released two autobiographical books: Living and Loving: Her Own Story on the base of which there was shot the movie. Also, she published the book under the title Recipes & Memories in 1999.

The sort of the bright red rose was called in honor of Sophia Loren. This rose has a velvety shade. This aromatic flower has gained popularity in Italy and the USA.

In 2017 Sophia Loren is still considered to be one of the gorgeous women of all times. The 82-year-old Italian actress looks great even at present days, and her new pictures impress the public.

Sophia Loren is an embodiment of the sensuality for the Italians and the example of strong female will. Moreover, her physical parameters (height -174 cm, weight – 68 kilos) are the beauty standard for the designers with world-famous names. In 2016 Domenico Dolce and Stefano Gabbana dedicated their new collection to the actress and demonstrated their works in Naples during Alta Moda fashion parade.

The day before such sensational fashion event Sophia Loren received the status of the honorable resident. Luigi de Magistris, the mayor of Naples, has handed the document to the movie star which proves this fact.

At the solemn ceremony, Sophia Loren appeared in a Dolce&Gabbana dress. 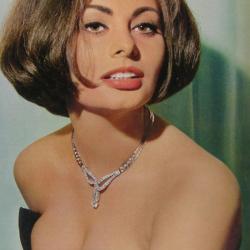