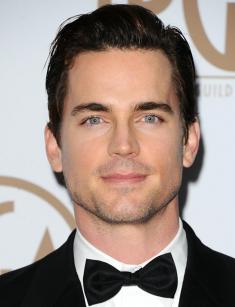 Matthew Staton Bomer, better known as Matt Bomer, was born in October 1977 in the town of Spring, which is located in a suburb of Houston. In addition to Matthew, Elizabeth and John Bomer had two more children. Matt's father was a professional footballer and became famous as a player of the Dallas Cowboys Club.

The father instilled in the children the love for football, and Matthew went in for this sport since childhood and was even going to become a professional football player. But besides sport, young Bomer had another exciting hobby. It was the theater. When he was eight years old, the boy wanted to try his hand at acting so much, that he begged his mother to find an agent for him. Since the woman did not take her son's words seriously, he had to learn acting on his own. Therefore, Matt improved his skills, playing in school productions and musicals.

Upon graduation from school, Matt Bomer had to make a career choice. He chose the cinematography and has never regretted it. Soon Matthew became a student at Carnegie Mellon University in Pittsburgh and graduated with a Bachelor of Fine Arts degree in 2001.

Matt Bomer began his acting career in New York City, where he moved after graduation. The young actor attended auditions there. Soon Bomer started to work in one of the theaters. For a while he went on the stage, playing minor roles, but this period ended when he was offered to play in a movie. Matt Bomer made his debut in the series All My Children. This soap opera aired on ABC in 2001.

Then he got another role in the series. This time it was a longer-running one, Guiding Light, in which the young actor played for almost three years. Since the work in this project took a lot of time, Bomer had to quit his part-time job. In his spare time, he was a courier at a firm located in the Twin Towers in New York City. By a fortunate coincidence, Matt resigned from this job a few months before the September 11 attacks.

Guiding Light made the actor famous. Nevertheless, it was not the real glory. Until 2009, Matt appeared in several TV series such as War Birds: Diary of an Unknown Aviator, Tru Calling, and North Shore. They were followed by more significant projects, including the movie Flightplan and The Texas Chainsaw Massacre: The Beginning. In the last film, Bomer played the title character for the first time and became recognizable. He got the next leading role in the adventure movie Traveler. The prominent works of that period are the films Chuck and The Losers.

Matt Bomer became very famous and successful after the release of the popular TV series White Collar, in which the actor appeared as an FBI employee, Neal Caffrey, who had previously stolen art objects. This American TV series was released in 2010 and immediately became a hit, turning Bomer into a superstar. The project was so successful that it was soon broadcast in European countries and many others. Five seasons have been currently released, but, judging by the success, it will be continued.

When he was busy filming in the project White Collar, Matt Bomer managed to star in other movies when directors invited him. The most successful ones are the film Magic Mike and the dystopia In Time, in which Matt Bomer appeared with Justin Timberlake and Amanda Seyfried.

In 2014, new films with Matt Bomer were released. These were the movie The Normal Heart and fantasy films Winter's Tale and Space Station 76. For a supporting role in the film The Normal Heart, Bomer won the Golden Globe Award. This project brought Bomer no less glory than White Collar. Matthew played an AIDS homosexual. Mark Ruffalo got the leading role. Julia Roberts and Taylor Kitsch also appeared in this series.

Later, Bomer said that he had read the play, on which the film was based when he was 14 years old. It was then that he realized that he belonged to sexual minorities. Since then he has dreamed of playing in a film based on this play.

But it was not easy to get the role. If director Ryan Murphy immediately chose Matt Bomer to play the role of Felix, the scriptwriter, and author of the play, Larry Kramer, found the actor too handsome for the character of a person with AIDS. To be cast in the project, Matt had to lose almost 20 kilograms. He even went to a special clinic where he drank only water and juice under the supervision of physicians for two weeks. Three months later, Kramer saw Bomer and no longer protested against his participation in the series.

For a long time, the popular actor avoided answering questions about everything that was not connected with his work. Matt Bomer's personal life was a closed book. At the beginning of 2010, the actor had an interview with a Details journalist and tried once again to avoid answering the question about his sexual orientation.

But in the spring of 2011, Bomer openly admitted that he was gay and had dated the well-known publicist, Simon Halls, for a long time. Together they bring up three sons. Their twin boys were conceived through surrogacy.