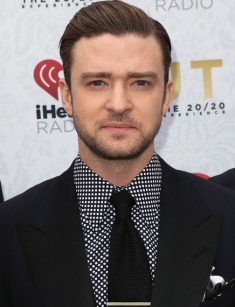 Justin Timberlake is a famous American pop singer, R'n'B performer, actor, composer, producer, and dancer. He is the owner of 4 Emmy Awards and 6 Grammy Awards.

Justin Timberlake was born in Memphis, Tennessee State, on the 31st of January, 1981. The singer has an English and Circassian background. His grandfather was a Baptist priest that’s why the boy was brought up in classical Baptist traditions. However, despite his religious education, Timberlake still considers himself the Christian in his spirit.

Justin's parents divorced in 1985 when the boy wasn't even five years old. Soon both of them created new families. So since then, Justin had a stepfather and also two stepbrothers. Despite widely held beliefs, a divorce of his parents hadn't influenced future star’s mentality – the boy grew healthy and was ambitious beyond his years.

Justin had taken his steps in his career of a musician on a TV show of "Star Search". There he performed a song in country style. Al Green, Michael Jackson, Elton John were singer's idols since childhood. Justin tried to reproduce the legendary movements of Michael Jackson since he was a little boy.

As well as many Hollywood stars the musician began his way to fame with participation in popular at these times children TV show "Mickey Mouse's Club". Cristina Aguilera, Britney Spears who later became his bride and "JC" Chasez – future partner of Justin in " 'N Sync" performed in this show together with 12-year Justin. In 1995 after the end of the show Justin and JC united to create a new boyband - " 'N Sync".

Justin was very successful since the youth. In 1995 the new group – a boyband of " 'N Sync" from 5 people was created. Justin was only 16 years at that time. He was a curly charismatic teenager who even hadn’t finished his school yet. Justin quickly became the soul and the face of the band. He was the first to pose for TV cameras and was constantly amazing everybody with his energy. Besides his participation in band’s life, he managed to study and attended courses for the beginning actors.

In 1997 the band released their first album " 'N Sync". The team of young, talented and incredibly charismatic guys gained huge popularity at once: the album was sold out in 11-million copies, the 3rd album "No Strings Attached 2000" was sold in 15 million copies. For 5 years of the band existence, they managed to get 3 prestigious awards of MTV Video Music Awards, and Justin became a sex symbol for millions of little girls all over the world.

However, the fame of the leader of the boy band wasn't enough for Justin and in 2002 the singer began his independent career. Justin recorded the first solo album - "Justified", and from this moment the name of Timberlake became extremely popular in the USA and later in the whole world. Sometime later his album would get two Grammy Awards and Justin would become the main nominee of MTV Awards.

In 2004 the scandal involving Timberlake burst out. While performing with Janet Jackson at "Super Bowl Half-Time Show", Justin tore the singer’s top and bared her right breast in front of millions of TV viewers.

Afterward, the singer justified himself and told that this had happened accidentally (though the single containing the words "I will undress you until the end of this song" had to tune the singer on a certain mood). After this incident which excited Mass Media, the admirers of the singer and other celebrities, Timberlake had to go quiet for a while.

Justin's return was a triumph. The singer recorded new albums which delighted his fans. At that time each new song of Justin became a hit immediately.

In 2008 the single "4 Minutes" recorded with Madonna was released, and later –the video for this song was shot. The choreography of the celebrities in this video and at their joint concert is still included in the Top Best Dancing Pop-Music Projects. The song blazed up the world charts and brought much more fans for both superstars.

In March 2013 there was a release of the third album of Justin - "The 20/20 Experience" which was recorded in a genre of neo-soul. The album was highly appreciated by fans and critics what can't be said about album's continuation "To The 20/20 Experience: 2 of 2". In 2014 Timberlake went on a big tour in support of both albums.

In 2013 Justin won in 4 categories of the popular "MTV Video Music Awards 2013". The singer received the highest award for the Best Video of the year and 3 more statuettes for Best Editing, Best Direction and also a special prize - "Michael Jackson Video Vanguard Award".

Justin Timberlake is a singer, the best dancer of the modern pop-scene, a talented actor, a loving family man and just a good fellow. He admires people with his style and they try to imitate it. Justin experiments with his appearance, whether with glasses in a stylish frame or with a masculine beard, he never stops delighting the audience with his perfect sense of taste.

His family is an example of love and fidelity. His songs, both solo and in collaboration with other musicians, get to the world music charts.

You can also see Justin Timberlake in movies. He played his first role in the picture "Edison", in which Morgan Freeman and Kevin Spacey performed the leading roles. However, despite such famous actors in the cast, the movie wasn’t of much success.

The picture "Alpha Dog", where Justin played one of the major roles, became the next movie in his filmography. Later he took part in several films, among them – his role in the Oscar-winning movie directed by David Fincher "The Social Network". This picture won 3 Academic Awards from 8 nominations and glorified Timberlake as a talented actor in addition to his stunning career as it is.

In 2007 he voiced-over the young King Arthur in the animated movie "Shrek".

It’s also worth mentioning the movies "Bad Teacher", "Friend With Benefits" in duet with Mila Kunis and a fantastic anti-utopia action movie "In Time" with Olivia Wilde.

Personal life of Justin Timberlake had always been associated with famous women's names. In 1999 - 2002, during the times of existence of " 'N Sync" Justin got through a serious love affair with Britney Spears. However, the wedding which was so expected by everyone didn't happen. Their four-year relationship had finished culminating by the world famous hit "Cry Me a River".

Then for some period of time, the singer was in a relationship with the actress Jenna Dewan and almost at the same time with popular Stacey Ferguson. Then he met a love of his childhood - actress Alyssa Milano, but these relations also didn’t last more than half a year. A couple broke-up under certain unpleasant circumstances: Justin was captured by journalists at the romantic date with some other girl.

In 2003 Timberlake began to date with the famous actress Cameron Diaz. The couple looked happy, and Justin didn't care at all about the nine-year age difference between them (at that time the singer was 22, and the actress – 31). But in 4 years they separated.

In January 2007 a wild fling began between Timberlake and Jessica Biel. During the Sundance festival, their joint photos on snowboards appeared in the press. Right after it, romantic photos of lovers began to appear. Right after this, their photos started to appear and in 2007 Justin and Jessica's romantic photos got to the press. However, Justin and Jessica began to meet officially only at the beginning of 2008. By 2011 couple broke up but they kept friendly relations.

So the news was striking when on the Christmas eve of 2011 Justin made to Jessica Biel a proposal. Their love turned out to be stronger than friendship, and on the 19th of October, 2012 Timberlake and Biel got married in Italy.

Their son Silas Randall Timberlake was born in April 2015. Since then Justin's photos with his beloved wife and his son regularly appear on we and his fans are delighted with his happy and united family.

For the first time, Justin visited snowy Russia in 2011 when he arrived on a premiere of the movie "Friends With Benefits" together with his movie partner – the stunning actress Mila Kunis.

In 2014 the singer visited Russia to perform in St. Petersburg and Moscow. His concerts took place within the tour in support of his album "The 20/20 Experience".

Moreover, Justin appeared at the 200th release of "Evening Urgant". 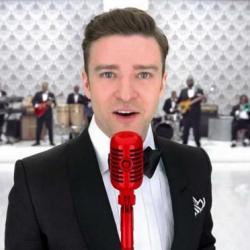