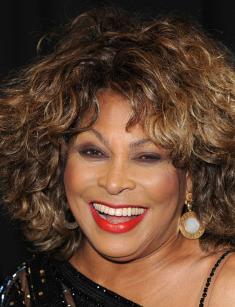 One of the most popular singers of our time is Tina Turner, who always set high goals and went to them without doubt and compromise. Success came quite late but what success. Today, The Queen of Rock 'n' Roll can safely say on the threshold of the 80th anniversary:

"I'm happier now than I ever imagined."

However, life, full of events and changes, which would be enough for more than one biography, was not always so serene. The history of the cult singer is a long-awaited glory and broken dreams, the revival of the "clean slate" and happy love, in the end; everything is in the best traditions of the American happy end.

As a child, Anna Mae Bullock so sounds the real name of the singer. There was nothing unusual that could portend a great future. Music was listened to on the radio and the first stage for a girl with a clear and strong voice was a church choir in the provincial town of Nutbush, Tennessee.

The family was neither strong nor particularly prosperous. The relationship between her parents was far from ideal; they divorced and left the children. Anna and her sister were brought up by her grandmother. The girls moved to her mother in St. Louis after her death.

Big city brought new encounters, hobbies and the anticipation of something extraordinary. The girls attended public school, were fond of music parties. The city was full of lively evening life and Anna and her sister were in the club "Manhattan" on the day of her birth, where the rock band The Kings of Rhythm often played. The leader of the group picked up a guitar and sang on the stage. It was Ike Turner, the first serious musician and a real chance in the music career of the future star.

The performance of the musicians struck the novice singer with its novelty and expression, Ike was already a star at that time and she only dreamed of the stage. Ike was skeptical about Anna`s offer to sing together but he promised that she would soon have the chance. It is not known how long it would have had to wait for the promised but Anna's desire to sing was so strong that she used the first favorable case. The time came, she just took the microphone and sang the hits of B. B. King with the passion that she was only capable of, it happened at one party in response to a joking offer of the musician of the group to perform something to her sister.

Turner could not appreciate the talent. Anna became the vocalist of the band The Kings of Rhythm. Ike felt a presentiment of success and bought shiny dresses and jewelry, furs and concert shoes with heels, chose hairstyles and sent to the dentist. So, there were branded elements of the style: a snow-white smile, the most beautiful women's feet on the stage, tight outfits, an elegant mop of careless hair.

The public perceived a special stage style and manner of performances, young Anna became the soul of the team quickly, the leading soloist and the favorite of the audience.

The group recorded several bright hits in the 60s and 70 and was very popular. The ascent to musical heights began with the theme "A Fool in Love," the singer did not come to the record and the single was recorded accidentally, it became a hit in America in a short time and brought the first wide popularity. Then there were the songs "It's Gonna Work Out Fine," "I idolize you" and a cover "Proud Mary," for which Tina Turner first received her Grammy Award.

In 1962, Anna and Ike decided to get married, "Tina Turner" appeared on the stage: Ike had his favorite character, the Queen of the jungle, she turned into Tina, who was his own Queen and savage tale. A stage name remained from her childhood and brought her great popularity. Ambitious Turner left the group. Tina must be the soloist and star in a new team.

Ike & Tina Turner gained their popularity quickly and went on tour. The creative duet gained momentum, vocals and backing vocals were characterized by complex performance, dance rhythm, which seems to be slightly lame, and original electronic effects, which were borrowed by many famous musicians.

Ike was a tough manager, musicians were often changed but Tina was always a faithful partner in life and work. She had to work for days to earn good money. Revue toured in a busy schedule but dreams of a "star hit" did not come true until Phil Spector appeared on the horizon with a project for Tina "River Deep — Mountain High." The single took an honorable third place in the British charts and the fashionable British, The Rolling Stones, invited a couple of Turner to participate in their world tour.

During the tour, there was a famous meeting with a fortuneteller, who predicted Tina a lot of fame and a bright future. The singer believed in herself and decided to leave the group. The hard work style with a group of Ike degenerated into tyranny. The musicians left the band, the band's popularity started to decline. Constant drugs and uncontrolled costs, scandals and beatings from her husband became unbearable and Tina Turner went nowhere with a few cents in his pocket and words in July 1976 :

"You take everything... I take my future."

Paying all fines for failed contracts and failed show, she hopes only on her forces and talent.

Tina started her solo career in 1978, after the divorce process. She presented albums "Rough" and "Love Explosion," which did not become commercially successful. She often tours with European artists in the absence of a notable musical career and the first success gets in the Old World. In 1983, the single "Let’s Stay Together» became a hit in Britain and then in Europe.

The turn came after a meeting at the «Hollywood evenings» with the future personal manager Roger Davies. He persuaded Tina to perform Rock 'n' Roll and created an example of the most commercially successful project in the history of the music industry.

The peak of luck and recognition came after a meeting with David Bowie, who arrived at the show at the Ritz Hotel with a representative of Capitol Records. Turner recorded her new songs in London in a couple of days: "1984" and "Let's Stay Together," which made her a real star. The symbolic single was "I Will Survive" - the life story and personal victory, reflected in the song.

The unsurpassed hit Simply the Best was a demonstration of the essence of the singer, where there is her close-up in dynamic angles in an expressive clip against the background of burning spotlights, which are replaced by a picture of galloping black horses, causing complex associations of the viewer

The interest in the singer in the United States came later. The album "Private Dancer" came here with a circulation of 11 million. It marked star recognition:

Over the years of her musical career, Tina released ten studio albums, won eight Grammy Awards and got into The Guinness World Records, gathering an audience of 188,000 at a concert venue in Rio de Janeiro.

She is a regular participant in popular TV shows, a welcome guest in the studio of Oprah Winfrey.

The whole world knows the soundtrack of the 1995 Golden Eye performed by Tina Turner to a new series of The James Bond that long existed outside the film.

There are popular clips duets with Elton John, Cher, Bryan Adams and other artists.

Tina had an affair with the saxophonist Raymond Hill, which ended with the birth of her son Craig and had no continuation. But the creative duet of Ike Turner and Anna Mae grew into something more. The singer will write in her autobiographical book many years later:

"We were as close as brother and sister. We had so much fun together."

Anna loved and tried to support her loved one, not knowing about the dark side of his character and life. In 1962, they got married and they were united by creativity, hard work and education of children the first years. Tina had time for performances in a busy schedule to raise four sons: Ike and Michael from the previous marriage of Turner, Craig, Ronald.

Over time, Drug addiction and violent character of Ike, the tyranny of work and the beatings at home brought a couple to the inevitable divorce. Bruises and beatings became increasingly difficult to hide from others, Ike beat deliberately to saw other people about his power. Tina decided to be alone without a penny in 1976. It ended with the official divorce in 1978.

The acquaintance with the producer Erwin Bach happened much later, at a party in London. He was only 30, three years older than Tina's oldest son and she was 46. In the mid-80s, the singer moved to Europe, lives in London, Cologne, Nice. In 1993, the couple legalized their relationship after a long relationship, settling finally in Switzerland, where Tina obtained her citizenship. It freed her from legal and tax obligations for conducting concert activities in America.

The enclosed wedding ceremony took place in the town of Küsnacht, Zurich, was held without journalists and outsiders, according to the rites of Buddhism, whose adherents Tina is 70 years. The guests were in white. The bride's dress was sewed at Armani. There were only the closest friends, including David Bowie, Eros Ramazzotti, Oprah Winfrey.

Today the singer lives peacefully and quietly, in a family circle, trying to help people. Tina Turner has a net worth of $250 million. Local authorities blocked part of the lake in Zurich so that other people could not see the property of Turner. She described her current condition in detail:

"As for me, my musical career ceased to be the main thing in my life. I did a lot and stopped in time."

The life story of the cult singer will form the basis of the musical Tina. The presentation of the project The Musical took place in London in 2016, directed by famous Phyllida Lloyd, the creator of the famous and beloved musical Mamma Mia!. Tina watches the fascinating retelling of her life with pleasure, selecting iconic hits – the main driving force and inspiration of the play. The premiere of the production is scheduled for 2018 to the anniversary of the singer and will be held in London.