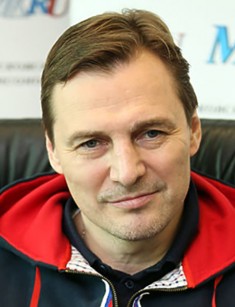 Sergei Fedorov is a Russian ice hockey player, whose biography can be better described in figures. He has played 20 seasons in the NHL, almost 1,500 matches and scored more than a thousand points during the game abroad, won three Stanley Cup Championships, three World Championships and the same number in the USSR and Russia. Needless to say that Sergei Fedorov is rightfully considered one of the most vivid ice hockey players of our time.

Sergei Fedorov was born in Pskov on December 13, 1969. Nine years later, the family of the future hockey player moved to the city of Apatity in the Murmansk region.

Since early childhood, Sergei was fond of sports. His first hockey team was Apatitstroy, and the coach was Yuri Bystrov. The team showed remarkable results, and soon Sergei Fedorov, as a promising ice hockey player, was invited to play in the Dinamo Minsk. There Fedorov played in the 1985 – 1986 season.

Next season, the young man spent with the CSKA Moscow, where he scored the first point of the Premier League in the match against the Chimik team. It was an outstanding victory for his age.

Officially Sergei Fedorov started his professional sports career in the late 1980’s, when Viktor Tikhonov, the coach of the USSR national team, put Sergei,Pavel Bure and Alexander Mogilny in one line. The coach’s idea was to replace the talented line of Sergei Makarov, Igor Larionov and Vladimir Krutov by this trio. And young ice hockey players proved their abilities at the first Youth World Championship. They won gold medals for the Soviet Union.

The talented ice hockey player was noticed not only in his native country. Fedorov was invited to the Detroit Red Wings team in 1989. However, the representatives of the team were not sure that Sergei, who lived in the USSR, would be able to break through the bureaucratic obstacles and the so-called iron curtain to join the team. But Sergei Fedorov succeeded. The hockey player, being in Seattle with the Soviet National team, simply ran away from his group and arrived in Detroit on a private plane.

Such a brave trick deprived Sergei Fedorov of the title of Honored Master of Sports of the Soviet Union, but gave a splendid future and opened the way to success. Fedorov scored a goal in the first match for the new team, and he finished the season with 79 points and 39 goals. The following seasons were no less successful: Sergei Fedorov confidently led the team forward and even won the Hart Memorial Trophy as the best player of the season.

The 1996 – 1997 season became very prominent. Sergei Fedorov scored five goals in one match with the Washington Capitals team. Altogether the player scored 20 points. Such a strong and talented game helped the Detroit to get the coveted Stanley Cup, first for the team in 42 years.

The same year the term of the contract expired. Sergei Fedorov, being a free agent, raised the issue of increasing the payment of the contract. After long hesitation, the club management was forced to agree to the conditions of the ice hockey player, and Fedorov continued to play in the Detroit. Unfortunately, the next three seasons were unsuccessful, but in the 2001-2002 season, the Wings got one more Stanley Cup.

In 2009, the hockey player played in the KHL. He signed a contract with the Metallurg team from Magnitogorsk. Sergei Fedorov also showed serious results there, allowing the team to reach the final matches of the Eastern Conference.

In 2012, Sergei Fedorov was appointed the Chief Manager of the CSKA team. The team's game was not always successful, so Fedorov's work was constantly criticized for personnel policy and the wrong choice of coaches. Nevertheless, the hockey player spent four years in this position, and in 2016 he was appointed the Chief Selection Manager of the CSKA Moscow.

Sergei Fedorov remains for many hockey fans the best player in the NHL team of our time. Critics and sports commentators point out that Sergei played equally well both in defense and attacking zone, which is a rarity in ice hockey. However, analysts tend to think that if Sergei Fedorov had chosen the game exclusively in defense, his results would have been much higher.

Little is known about Sergei Fedorov's personal life. He had a famous affair with tennis player Anna Kournikova. The sportsman even claims that in 2001 the bright blonde, whose photos at that time decorated the covers of almost all sports publications, became his wife. But the marriage was not strong, and two years later, they divorced. But Anna denies this information, stating that she has not married Sergei Fedorov.

Be that as it may, but nowadays Sergei and Anna improved personal relations. Shortly after the alleged break, the girl began to meet with popular singer Enrique Iglesias. According to media sources, the hockey player also had several affairs, including with such actresses as Jennifer Love Hewitt and Tara Reid.

The name of Sergey’s girlfriend is not known for certain. However, there is information that the hockey player is happily married and has a daughter, Alexandra, who was born in 2016, and a son.

Sergei has a younger brother Fedor, who has also become a professional ice hockey player.

In one of the last interviews in 2017, the ice hockey player announced that he is now a member of the CSKA club Supervisory Board. Sergei Fedorov has admitted that, whenever possible, he tries to participate in the life of the club, attend games and even travel with the team to foreign countries.

However, the hockey player has said, at the moment he is planning to take a break from ice hockey, taking a termless break. According to Fedorov, he has become tired of being the club's Chief Manager all these years. So the athlete simply needs to relax and devote time to the family and children.

Nevertheless, the fans still hope to see the brilliant game of the famous ice hockey player Sergei Fedorov. They believe that the sportsman will certainly return to the ice.

• 2010 - silver medalist of the World Championship 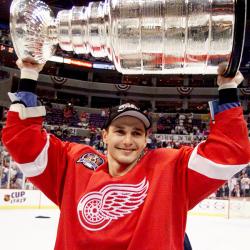