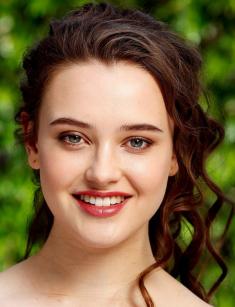 There were not so many examples when a previously unknown actor or actress thanks to the debut role ascended to the rank of world stars. Some of them manage to move further along the starry stairs and shine on the carpets of the events. Others remain actors in one role, unable to catch their luck by the tail.

We hope that a young Australian actress Katherine Langford, whose creative biography started with the lead role in the youth drama series 13 Reasons Why, will go the first path.

Katherine Langford was born on April 29, 1996, to Stephen Langford, a flying doctor, and his wife, Elizabeth. Her hometown is Perth, Australia. The zodiac sign of the actress is Taurus. As a student, the girl was attracted to swimming. She was so into this kind of sport that she was able to achieve results at the national level.

In high school, Katherine attended Lady Gaga's concert. Impressed by the singer, she began to take lessons in piano and vocals and auditioned in the theater school but did not succeed because of lack of experience.

However, Langford went to music school and received a diploma in musical theater. At the same time with visiting actor's studios and clubs, she got part-time jobs as a bartender in a nightclub and as a ticket saleswoman. At the end of 2015, she was enrolled in the Western Australian Academy of Performing Arts but never started her studies, having started her career.

The starring role of the young Australian actress was the image of Hannah Baker in a television series 13 Reasons Why released by streaming service Netflix. The film is based on Jay Asher's novel Thirteen Reasons Why, which tells about how difficult it is to be a teenager. During the filming of the series, Katherine collaborated with representatives of the so-called independent cinema: Oscar-winning (for the movie Spotlight) director Tom McCarthy, Kyle Patrick Alvarez, and Gregg Araki. Selena Gomez and her mother are one of the executive producers of the project.

As Katherine said in an interview, when the filming started, she did not know what to do with her life, because she was unemployed. Before that, the young woman tried to pass the selection in two Internet projects, but she did not get any role. And when Katherine found out about the casting in 13 Reasons Why, she contacted the director on Skype. Then, when the directors made a choice, Langford had to work hard to get a visa within ten days, because she had never visited the United States before.

The title of the series means 13 reasons that have led to the suicide of the protagonist. The production team of the series began to experience serious pressure from both critics, parents and the medical community almost immediately after its release.

The series was accused of promoting violence and suicide (especially given the scenes of rape and Hannah slitting her wrists). In Canada, students were even forbidden to discuss the series in schools. In the summer of 2017, the results of a study were published that recorded an increase in online suicide requests after the project was released.

Netflix has opened a site with the same name as the series, where it has placed a link to a resource to help people with mental health problems. And producers had to do a special warning before each episode.

However, there were also those viewers who saw in the series another component: do not run away and hide from the problems (and in fact, Hannah did so). As for them, it is necessary to be more attentive to others, and children need to be not afraid to share with parents if they noticed the strange behavior of classmates. In metaphorical poems about the naked soul written by the protagonist, attentive readers and viewers saw a message to how important it is to be able to listen and hear.

Aside from the series, there are other projects which brought Katherine popularity. A short film Daughter with Katherine debuted at the 2016 Cannes Film Festival. In the thriller Imperfect Quadrant by Pann MuruJaiyan, the actress got the role of Ruby.

We know nothing about the private life of secretive by nature actress: whether she keeps it secret or simply is not dating anyone. As it usually happens, after the release of 13 Reasons Why on the screens, the audience wondered about the relationship between the actors and actresses of the lead roles. But Katherine Langford and Dylan Minnette are great friends in real life. Moreover, according to insiders, Minnette was in a relationship with actress Kerris Dorsey. Katherine calls the partner on the set one of the most talented and generous people she had worked with.

At a young age, Katherine and Dylan had a chance to work together in the pilot of the project Save Me. But the NBC company has not launched the project. Young people regained contact on the set of 13 Reasons Why and became close friends.

Playing the piano is still Katherine's passion. To restore mental balance, the young woman sits down at the instrument and improvises. Langford also likes to read sci-fi literature. The actress would prefer to take the time machine back to the past as she is attracted by the late 19th century and the 1980s.

As of 2019, Katherine Langford has a net worth of $4 million. The actress shares with what's going on in her life now on her page on Instagram with more than 13 million subscribers. Fans also get information via publications in the media and fan groups in social networks. By the way, it was Selena Gomez who advised Katherine to come back to a previously private page on Instagram. She drew Langford's attention to the fact that social networks are a good mediator in communication with people who associate the actress with her character. However, according to Katherine herself, she has not got a profile on Facebook and Twitter.

Langford publishes posts in support of the LGBT movement, as well as singer and producer Selena Gomez, who has undergone a kidney transplant.

The actress appears in TV shows, participates in photo shoots for The Hollywood Reporter and the Flaunt magazine. Katherine's pictures with her height of 5'5'' (166 cm) and weight of no more than 127lbs (58 kg) adorn the pages of The Last Magazine, The Wrap, and Los Angeles Times.

Katherine is a regular at various parties and social events, including Power of Young Hollywood, awards ceremonies like Teen Choice Awards, and HFPA/InStyle Golden Globe Ambassador Reveal Party. Sometimes some photos of the actress without makeup appear in the press, although Langford likes to experiment with her appearance and most often uses bright colors for this.

In Greg Berlanti's сomedy Love, Simon, the plot of which develop around gay teenagers, Katherine played the lead role. She portrayed a friend of a guy with different sexual orientation. The comedy was released in 2018.

Another work with the participation of the actress was the comedy The Misguided, where she appeared in the lead role. The movie was created by Australian filmmakers. The plot is focused on two brothers who are involved in an unpleasant story.

Moreover, the second season of the series 13 Reasons Why started in 2018. Katherine came back to the role of Hannah Baker. And the cast remained the same. Christian Navarro, Ross Butler (also known for Riverdale), Alisha Boe, and Brandon Flynn also starred in the new season.

The characters continued to look for reasons that influenced the death of their classmate. This time, the source material was a collection of Polaroid photographs found in Hannah's documents. According to the plot, the second season has an open ending. The rape of Tyler (Devin Druid) by Montgomery de la Cruz (played by Timothy Granaderos) caused a nervous breakdown of the victim. At the moment when the bullied student started shooting at the school, Clay (Dylan Minnette) managed to stop him.

The third season was announced a week after the premiere of the second one. It was claimed that Katherine's character would no longer appear on the screen. But the creators explained why they decided to continue filming. First of all, to complete Clay's line, as well as to reveal a few topics relevant to teenagers - early pregnancy, the use of firearms, and the first love experiences.