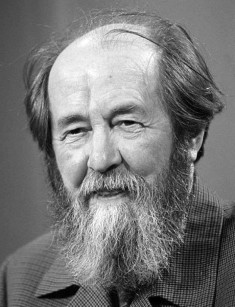 Aleksandr Isayevich Solzhenitsyn is the outstanding Russian writer and social activist. In the Soviet Union, he was considered to be a dissenter dangerous for the communist society; he was imprisoned for many years. Aleksandr Solzhenitsyn’s books are wide-known: “The Gulag Archipelago,” “Matryona's Place,” “One Day in the Life of Ivan Denisovich,” “Cancer Ward,” and many others. He became the laureate of the Nobel Prize in Literature; besides, he was awarded the prize only eight years after his first publication – it is a record.

The would-be writer was born at the end of 1918 in the town Kislovodsk. His father Isaaky Semenovich survived the First World War but died before his son was born when he was hunting. The mother Taisiya Zakharovna had to bright up Aleksandr alone. Because of the October Revolution outcomes, the family lived down-and-mouth, even though it had moved to Rostov-on-Don which was a more stable city at that period. Solzhenitsyn had problems with the new authorities at primary school: he was brought up according to religious traditions, wore a cross, and refused to join Pioneers.

At university, the young man was interested in acting and even tried to enter the theater school but failed. He continued his education in Moscow University, Faculty of Literature but did not have time to graduate: the Great Patriotic War began. Still, the period of education was not over: Solzhenitsyn could not be called up for the military service as a common soldier because of health issues, yet the young patriot achieved the right to study at the officer courses under the Military School and went to the artillery regiment as a lieutenant. The would-be dissenter was awarded the Order of the Red Star and Order of the Patriotic War.

As Solzhenitsyn was promoted to captain, he continued to serve his motherland bravely but got more and more disappointed in its leader, Joseph Stalin. He expressed such ideas in his letters to his friend Nikolai Vitkevich – according to the Soviet unwritten rules, it implied he was dissatisfied with the while communist order. One day, such a letter was read by the military censorship chief. Aleksandr Isayevich was arrested, deprived of the rank, and sent to Lubyanka in Moscow. After long months of extreme interrogation, the former war hero was sentenced to seven years of labor camps and internal exile for life after this term.

Initially, Solzhenitsyn worked at a construction site and took part in building the houses near the modern Gagarin’s Square in Moscow. In a while, the state decided to use the prisoner’s mathematics education and moved him to the special prison system under the closed construction bureau. Because of the conflict with the authorities, Aleksandr Isayevich was sent to the harsh world of the common labor camp in Kazakhstan where he spent about one-third of his confinement term. After Solzhenitsyn was set free, he was banned from going to Moscow. He was given a job in South Kazakhstan: a teacher of mathematics at school.

In 1956, Solzhenitsyn’s case was revised, and it was announced that there were no constituent elements of the offense. Thus, the man could come back to Russia. He began to work as a teacher in Ryazan and concentrated on writing after the first publications. Nikita Khrushchev, the First Secretary of Central Committee of the Communist Party of the Soviet Union, supported him since anti-Stalin sentiments were useful for him. However, the writer lost his favor later; when Leonid Brezhnev became the Soviet leader, his works were banned completely.

The situation was complicated by the popularity of Aleksandr Solzhenitsyn’s books which were published in the US and France without his permission. The authorities considered his public activity to be dangerous for the society. The writer was offered the emigration; when he rejected the offer, a KGB member attempted his life and made a poisonous injection. The writer survived, although he was seriously ill after that. In 1974, he was accused of high treason, deprived of the Soviet citizenship, and sent outside the USSR.

Aleksandr Isayevich lived in Germany, Switzerland, and the USA. He spent his earnings to found “Russian Public Fund to Aid Political Prisoners and their Families” and delivered lectures on the communist regime inefficiency in Western Europe and North America. However, he got disappointed in the American system as well and started criticizing it. When Mikhail Gorbachev started Perestroika in the USSR, the attitude toward the writers’ works changed. The Russian President Boris Yeltsin persuaded him to come back to the motherland and gave him the state dacha “Sosnovka-2” in Troitse-Lykovo.

Aleksandr Solzhenitsyn’s books – novels, novellas, short stories, and poetry – can be subdivided into historic and autobiographic works. From the very beginning of his literary activity, he was interested in the history of the October revolution and the First World War. The research work “200 Years Together,” essay “Reflections on the February Revolution,” the epic novel “The Red Wheel” which is the part of the famous “August 1914” deal with this subject.

The poem “Prussian Nights” where the writer described his pre-war life, the short story “Zakhar-Kalita” about a bicycle trip, and the novel “The Cancer Ward” about the hospital pertain to the autobiographical works. The war is described in Solzhenitsyn’s unfinished novella “Love the Revolution” and the short story “An Incident at Krechetovka Station.” However, the audience is particularly interested in “The Gulag Archipelago” and other works on repressions and the books on the imprisonment in the USSR – “In the First Circle” and “One Day in the Life of Ivan Denisovich.”

Solzhenitsyn’s works are notable for their epic scenes. He informs readers about the characters who have various opinions on one and the same problem due to which it is possible to draw conclusions independently. The majority of Aleksandr Isayevich’s characters are real people, although their names were changed or kept secret. Besides, numerous allusions to the Bible and Goethe’s and Dante’s works are characteristic of the writer’s style.

Many artistic personalities appreciated Solzhenitsyn’s works, for instance, the fanciful writer Korney Chukovsky and the writer Valentin Rasputin. The poetess Anna Akhmatova marked the short story “Matryona's Place” and the movie director Andrei Tarkovsky singled out the novel “The Cancer Ward” among the writer’s works and even recommended it to Nikita Khrushchev personally. The Russian President Vladimir Putin who met Solzhenitsyn several times respectfully noticed that the writer always viewed the state as the unbreakable constant no matter how he saw the existing authorities and criticized them.

Aleksandr Solzhenitsyn met his first wife Natalia Reshetovskaya in 1936 when he was a student. They married in spring 1940 but spent little time together: the war and the later arrest did not give the couple any chance to be happy. In 1948, Natalia Reshetovskaya divorced Solzhenitsyn after the People's Commissariat for Internal Affairs numerous stimuli. However, when the writer was rehabilitated they began to live together again in Ryazan and remarried.

In August 1968, Solzhenitsyn met Natalia Svetlova, the mathematical statistics laboratory employee; they started seeing each other. When the first wife learned about this affair she tried to commit suicide but the ambulance managed to save her life. In several years, Aleksandr Isayevich managed to get the official divorce. Later, Reshetovskaya married several times and wrote memoir books about her ex-husband.

Natalia Svetlova became not only Aleksandr Solzhenitsyn’s wife but also his closest friend and public affairs assistant. They went through the emigration ordeals and brought up three sons: Yermolai, Ignat, and Stepan. Besides, Natalia had the son Dmitry Turin from the previous marriage. Solzhenitsyn’s second son Ignat became famous as a pianist: he is the main conductor of the Chamber Orchestra of Philadelphia and guest conductor of the Moscow Symphony Orchestra.

Aleksandr Solzhenitsyn died of acute heart failure on August 3, 2008, several months before his 90th birthday. This person of unusual and hard luck was buried in Moscow, Donskoy Cemetery, the largest noble necropolis of the city. 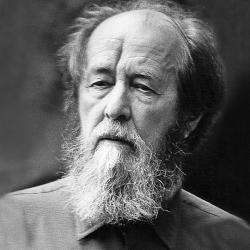