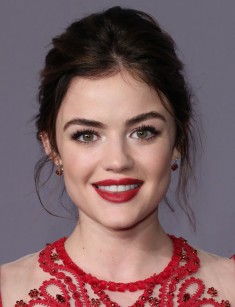 The actress Lucy Hale is full of surprises. She loves country music, unicorns and dazzling smiles. The girl became famous after a musical TV show. She managed to build a career in the harsh film business, without losing sensitivity and open-mindness. Between filming in the box office series and posing on the red carpet, the actress also devotes her time to charity, helping difficult teenagers.

Karen Lucille was born on June 14, 1989 in Memphis, Tennessee. Lucy is not the only child of Julie and Preston Hale. The girl also has an elder sister Maggie and a stepbrother Wes.

The first years of the future star of "Pretty Little Liars" were just like the life of her contemporaries. But when Lucy turned 12 years old, she started homeschooling because her mother noticed her musical talent. The child had more time for singing and acting lessons.

In parallel with a new schedule there appeared family problems. Lucy’s parents divorced and the girl stayed with her mother. In her interviews, Hale admitted that she had suffered from an eating disorder.

When Lucy was 13, she along with her mother, who believed in her growing daughter’s talent, went to Los Angeles for the contest "American Juniors". The girl made it to the finals, performing the song "Call me".

The producers of the show formed a music band that disbanded in 2005. Even before the breakup of the band, the teenagers managed to participate in such television projects as "An American Idol Christmas" and "Slime Time Live".

The victory at the contest gave Lucy confidence in her own talent, so at the age of 15 the girl finally moved to California. But there was no immediate growth in her career. For several years the girl went to castings and occasionally starred in secondary roles.

Lucy starred in the TV series "Bionic Woman". The girl got one of the main roles but the series was closed because of low ratings and strikes of script writers. However, even short, but memorable appearance was enough for the actress to be more actively invited to castings.

After starring in "Bionic Woman" Lucy appeared in the movie "The Sisterhood of the Traveling Pants 2. And the series "Pretty Little Liars", the screen version of the books by Sara Shepard, brought the girl the worldwide success.

Initially, the producers planned to release only 10 episodes but the series with a successful cast had high ratings. "Pretty Little Liars" had seven seasons. By the way, Lucy's partner in the film was Ashley Benson - a close friend of Hale. The girls met and became friends when Lucy moved to Los Angeles.

In parallel with the acting career, the girl did not forget about music. Lucy recorded the soundtrack "Lie a Little Better". The actress admitted that she dedicated this song to one of the actors of the series with whom she fell in love.

The fans were sure that the girl meant Ian Harding - the screen lover of Hale. But in one of the message in social networks, the girl confessed that she meant Drew Van Acker (performer of the secondary role).

In the intervals between the shootings of the popular thriller, Lucy played the role of Katie Gibbs in the film "A Cinderella Story: Once Upon a Song". The film received mixed reviews but critics positively responded to the soundtracks that Hale performed. Fans of the actress liked the song "Make You Believe" most of all.

In 2014, the actress took a break in the acting career and returned to singing. Lucy released the album "Road Between". The girl got positive reviews and the songs were called "charming commercial pop, easy and pleasant."

The album also includes tracks that the girl wrote herself. Lucy liked the process of the song creation so much that she wrote the composition for the singer Ashliegh Lisset.

The unusual style of the famous girl attracted the attention of designers. The brand "Holister" offered the actress to create her own collection. The clothes with her label were sold out in the US within a week after appearing on the shelves. Hale created the design of the collection herself.

The girl spends her free time at home. In an interview for Cosmopolitan, Lucy admitted that she considers herself an introvert and does not like parties. Hale takes life easily. Only in relation to her dog Bentley, the girl tries to be serious and responsible.

In 2007, the relations of the two actors of the series "Wizards of Waverly Place" were discussed by all the popular magazines. Lucy and David Henrie met on the set and spent about 2 years together. In 2009, the couple broke up without explaining the reason.

In 2012, the actress met her colleague Chris Zylka. There relationship lasted 6 months and ended with the ugly tweet of the young man:

"I do not have a girlfriend. She decided that she was too good for me. "

After short relationships with the actor Graham Rogers and the singer Joel Kraus, the girl met a musician Anthony Calabretta.

Two years later, fans noticed a ring on an unnamed finger and started talking about the engagement of the young people. But in 2017 the couple broke up. The official version is that Lucy is too busy with her work and does not pay enough attention to her lover.

In 2018, three new projects with the actress appeared. The horror film "Truth or Dare" tells of a popular youth game which had an unexpected turn for the participants. The premiere took place in April. Lucy played the main role in the film.

In parallel with the film, the series "Life sentence" was released. Hale played a girl who recovered from cancer and had to deal with the consequences of her own thoughtless actions.

There also were changes in the personal life of the actress. On the set of "Life sentence" the girl met the actor Riley Smith. The paparazzi noticed the young people kissing on the Valentine's Day.

Another important premiere will be the movie "Dude", which will be released in April 2018. The film tells about school friends who are going to study in different universities. Lucy played along with Alex Wolff, Alexandra Shipp and Austin Robert Butler. 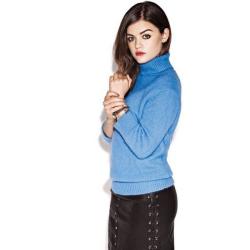