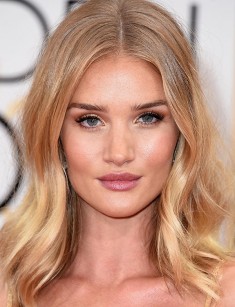 Every model dreams to receive the offer of Victoria's Secret brand one day. The girls were called "angels" for the graceful "wings" which they wear at the podium during the fashion displays. Rosie Huntington-Whiteley is one of the most well-known models - "angels".

Rosie was born on the 18th of April, 1987 in the English town of Plymouth. Her father worked as a real estate agent, and her mother worked as a fitness instructor. It should be noted that on her father’s line the model has noble roots, her paternal great-grandfather had the Baronet's title.

In youth, there was nothing in Rosie's appearance that could predict that she would become one of the most famous models in the world. At school children mocked at her because of her small breast and full lips. Today these features are like the "business cards" of the supermodel.

Rosie started her career still being a schoolgirl. In 15 years the London "Profile" model agency had noticed the girl. In 16 years, having graduated from the school, Rosie held her first presentation for the jeans clothes brand - Levi's. From this point, her career began to take off. In 2004 she took part in the photo shooting for "Teen Vogue" magazine, and the same year she debuted on the podiums of New York together with gorgeous Naomi Campbell.

Rosie’s business was getting better and better, in 2006 she began to cooperate with world-famous Victoria's Secret brand. From 2008 till 2011 she became the "angel" of the company. During the same period, the model concluded the contract with Burberry Fashion House and she appeared on the cover of the British "Vogue".

In 2009 Rosie Huntington-Whiteley began to try herself in cinematography. It was the short-length movie which was shot for rather frank fashion line of Agent Provocateur. In this short movie, Rosie performed as a girl whose guy had forgotten about St. Valentine's Day.

Already in May 2010, it was announced that Rosie Huntington-Whiteley was acting in the leading female role in the movie "Transformers: Dark of the Moon". Rosie had to replace Megan Fox. Rosie got acquainted with the director of the movie Michael Bay during her work over promo videos for "Victoria's Secret". At that time the director paid attention to her.

The movie was met with restraint, and the critics especially discussed Shia LaBeouf and Rosie's acting skills. "Wenner Media" had got the following verdict: "There can't be more boring actors than these two". "The Observer" had written: "We got acquainted with Rosie through the close up of her backside which was smoothly passing into the initial credits, her breast, and her underwear".

Everything was criticized even Rosie’s British accent. One of the observers entitled the review with the following words - "Return, Megan Fox, we’ll forgive you everything". Positive reviews were limited to the fact that Rosie’s slurred acting corresponded to the low quality of the movie. It was at least naïve to wait for a breakthrough.

Despite the deluge of criticism, Rosie made the decision to perform in the movie "Mad Max: Fury Road", which was released in May 2015. This role was accepted by the critics more warmly.

During the shootings in the movie, Rosie didn't forget about her main profession. In 2010 she posed nude for the annual Pirelli calendar, she participated in the shootings of the underwear collections from "Monsoon", "Thomas Wylde" and "Full Circle". She appeared on the covers of "Harper's Bazaar Russia" and "GQ UK", and she took part in the photo shooting in pin-up style for "Love Magazine". The same year the famous photographer Rankin (John Rankin Waddell) published the book "Ten Times Rosie".

During this time Rosie Huntington-Whiteley became the face of such brands as Dolce & Gabbana, Givenchy, Prada, Valentino and many others.

Since 2010 Rosie has had relations with the British actor Jason Statham. Their engagement was announced in February 2016. Their relations often become the subject of close attention of the British press, in particular of "Daily Mail" and "The Telegraph" newspapers.

Mass Media don't miss an opportunity to notice too confidential relations of Rosie with Shia LaBeouf on the shooting stage of "Transformers" or Statham's absence at the photos from the party on the occasion of the birthday of Candice Swanepoel - Rosie’s friend and the first of Victoria's Secret "angels" from South Africa.

In October 2016 there appeared the photos of the model in the wedding dress and with a ring, so many media sources considered this to be the sign of the soon wedding of Rosie and Statham. On the 10th of February 2017, Rosie herself shared news about her pregnancy on Instagram. Her numerous admirers (only on Instagram Rosie has more than 7 million subscribers) are waiting for further news about the private life and professional success of their idol.

In 2016 and 2017 the news about Rosie didn't concern red carpets and podiums because of her pregnancy.

On the 24th of June, 2017 Rosie Huntington-Whiteley became a mother for the first time. She gave birth to the son of Jason Statham. The kid was born with a weight of 3,6 kg. He was called Jack Oscar Statham.

One more point which attracts attention is her style. Perhaps, Ciara Sheppard, the observer of "Glamour" magazine had most precisely commented on it:

"Nobody will be able to wear a white shirt and jeans as Rosie does... The experimental fashion is not about our heroine, she always chooses classy clothes. Rosie knows how to present herself, she is the queen of casual style".

Really, even the most revealing outfits of the model are created from classical elements in which there is no vanguard at all. Such combination of openness and classics makes Rosie one of the most stylish models of the present time. 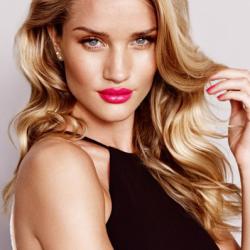