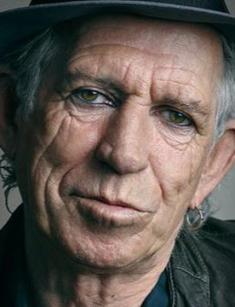 The guitarist Keith Richards is the musician, singer, and songwriter; he is the heart of the group The Rolling Stones, “Greatest Rock 'n Roll Band in the World”.

The would-be artist was born in Dartford, Great Britain, on December 18, 1943. The boy’s grandfather was a conductor and influenced his grandchild’s career choice. Besides, Richards’s mother, Doris, loved music, too. Keith began to develop his talent early and became a school choir member; he sang at Coronation of Elizabeth II at the age of ten.

The teenager’s voice changed, just like his interests. The young man received his first guitar from his mother; it was his present for the 15th birthday. Richards used every spare moment to learn how to play the instrument and practiced Elvis Presley’s songs; “That's All Right Mama” was one of them.

As a student, Richards frequently played truant and got expelled from Dartford Tech. The director gave him a recommendation to study at Sidcup Art College. However, Keith continued to play truant and preferred to work on his own music rather than studying “commercial” art.

When the would-be star attended the art school, he met the guitarist Dick Taylor who was a group member along with Mick Jagger. By that moment, Richards had already known Mick: they grew up together in Dartford. Soon, Keith joined the band named Little Boy Blue or Blue Boys back then.

The three young men loved American blues. Besides, Richards was inspired by American rock’n’roll, particularly, Chuck Berry; he bought an electric guitar and played Berry’s hits, such as “Maybelline”.

The group focused on blues music creation and gave the first shows in a while. Jagger and Richards went to auditions for Blues Incorporated, the new group founded by Alexis Korner that often played at the Ealing Jazz Club. The remarkable guitarist Brian Jones who had the stage name Elmo Lewis joined the band that night.

Richards and Jagger were impressed by Jones. Soon, the young people became roommates and companions. Jones tried to gather together his own group; besides, their friends Dick Taylor and the keyboard player Ian Stewart were The Rolling Stones members in 1962.

By the middle of the next year, the dramatic changes took place. The drummer Charlie Watts joined the band while Taylor left the group; Bill Wyman replaced him. Stewart continued to be the manager and guest musician of The Rolling Stones. Under the manager Andrew Loog Oldham’s guidance, the young people created the stage image of the brutal guys.

Initially, the group was recording cover versions of other artists’ songs. Soon, Richards and his colleagues made a wonderful songwriting team; they used the pseudonym “Nanker Phelge” for some early works.

1964 brought the first chart appearance in the British charts for the cover on Bobby Womack’s “It’s All Over Now”. The same year, The Rolling Stones presented their debuting album with the same name and started touring in the United States. They also recorded the first American hit “That Girl Belongs to Yesterday”. The 1970-1980s album hits followed: “Sticky Fingers” (1971), “Exile on Main St.” (1972), “Emotional Rescue” (1980), and “Tattoo You” (1981).

In 1989, Richards and Jagger presented their collaboration studio album Steel Wheels; fans saw it as the group’s comeback.

In 1993, Keith created the song “Eileen”; both experts and ordinary listeners liked it. The next year, the album Voodoo Lounge took the second position in music charts.

In 2005, The Rolling Stones presented the new album Bigger Bang; although there were no popular singles there, the sales and critics’ opinions were good. The musicians had a large tour supporting the album. Some shows had to be postponed in 2006: Richards had a head injury when he fell off a tree in the Fiji Islands; brain surgery was required. As soon as Richards recovered and renewed the tour, he announced he gave up drugs after surgery.

In 2007, the artist had a small role in Pirates of the Caribbean: At World's End: he personified the father of Captain Jack Sparrow (Johnny Depp).

The group members seemed to be wild rockers, just like they set themselves up. Thus, the police had a search in Keith’s house on February 12, 1967; Mick Jagger, his girlfriend Marianne Faithfull, and several other people were there, too. Drugs and some questionable equipment were found. Jagger and Richards were convicted, but their sentences were suspended after the appeal. Later on, the musician had several drug-related arrests.

When Jones left The Rolling Stones in 1969, the artists focused on the rock genre. In December 1969, Richards became a father: his girlfriend Anita Pallenberg gave birth to the son Marlon. In 1972, the daughter Dandelion (now Angela) was born. The third kid, the boy Tara, died several weeks after his birth in 1976.

By the end of the 1970s, Richards developed severe heroin addiction. In 1977, he was arrested for hard drug possession in Toronto, Canada; he could have received a life sentence. The man was allowed to undergo a treatment course in America.

Although Keith’s struggle against drugs was hard, he came back to music. The next The Rolling Stones album, Some Girls (1978), was a tremendous success: eight million copies were sold. Because of Keith’s drug abuse, the atmosphere in the group deteriorated; Richards and Jagger were having conflicts all the time and did not speak to each other for weeks.

The group’s future seemed unclear. However, the man’s personal life changed for the better. In 1983, when he turned 40, Keith married the model Patti Hansen. The twins Theodora and Alexandra were born in this family.

In October 2010, Richards published his autobiography Life. Fans learned that Keith liked to read and had a large book collection. The artist also shared his thoughts about being a rock star, drug experiments, the women in his life, and the relationship with Mick Jagger. Millions of copies were sold immediately.

On March 25, 2016, The Rolling Stones held a free concert for 500 000 people in Havana, Cuba, where the communist regime had their music banned. The show followed the historical visit of US President Barack Obama; it was a part of the government relations normalization between the countries. The event took place at the sports arena; it was a part of the South American tour in 2016.

Despite his senior age, the musician regularly posts concert pictures on his official Instagram page; he also posts interview videos there.