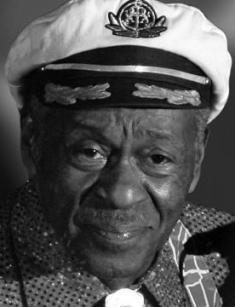 Every fan of Quentin Tarantino remembers the legendary scene from the movie Pulp Fiction, where Mia Wallace (Uma Thurman) and Vincent Vega (John Travolta) dance incendiary twist in the restaurant. No wonder, the master of postmodernism chose the musical accompaniment of the king of Rock and Roll, Chuck Berry (the song You Never Can Tell ) because he was considered to be one of the most influential performers of this genre.

Also, the song of this musician can be heard in the fantastic movie Back to the Future of Robert Zemeckis. The Beatles, The Rolling Stones, The Yardbirds, The Animals and many others considered this master their mentor and John Lennon said once:

"If you try to find another name for Rock'n'roll, then let it be Chuck Berry."

Although slavery was abolished in the winter of 1865 after the civil war, John Crow`s laws were in the United States, in which black people were lower in society than white Americans: these people were disenfranchised and sometimes not regarded as human beings at all. And Martin Luther King was able to change the situation radically in 1950-1960s.

The great musician, who left a mark in the history of rock and roll, was born in this troubled and cruel time in the independent city of St. Louis in the autumn of 1926. The boy grew up and was raised in an average large family (Chuck is the fourth of six children), his father Henry William Berry was a devout man and religion was his priority in his life: he served as a deacon in the nearest Baptist church. The mother of the performer, Martha Bell, worked as a director in a public school.

Chuck's childhood was in the Northern district of St. Louis, which was famous as a typical ghetto, which was inhabited by black, middle-class people. There were laws of the jungle in this area: every resident of the quarter was for himself, so it is not surprising that the young boy saw the social inequality and heard the firing of guns in the style of the Wild West at night. So, hooliganism, riots and the constant pursuit of the police were commonplace for this hot spot.

As you know, "talent is the development of natural inclinations" (Honoré de Balzac) and of Berry the tendency in music. The future king of the stage began to master the world of intricate melodies and sounds since childhood: Chuck gave his first concert on the Hawaiian four-stringed instrument, ukulele, when he was a high school student.

Unfortunately, there was a black stripe in the biography of Chuck. But, it was expected because the guy grew up in a disadvantaged area. He and his friends were sentenced to prison for ten years for stealing a car and robbery of three stores (the guys used a broken gun), when Berry was 18 years old. Berry continued to enjoy music and even organized his group, consisting of four people. Chuck was released earlier for his good behavior three years later.

The future performer realized that he could not build his happiness with the help of the crime; Chuck got a job at a local car factory to earn money. Also, according to rumors, Berry worked as a cleaner, hairdresser and beautician. But the young man did not forget about his favorite thing: he changed his ukulele to a more serious instrument, an electric guitar and began to play in the clubs of St. Louis.

People believe all over the world that the God of rock and roll is Elvis Presley. Others think that the founder of the explosive but melodic genre was Little Richard, who was born in 1932. However, Chuck Berry was the first, who began to mix Country and Blues motifs. In 1953, Berry became the creator of the creative team The Johnnie Johnson Trio. He began to cooperate with the American pianist Johnnie Johnson.

The musicians performed in the club "Cosmopolitan." Berry did not only play the guitar professionally but also managed to please the audience with short poems of his composition. Chuck began to think seriously about his music career, knowing the charm of loud applause.

However, it happened. Chuck met with a prominent figure in the music industry Leonard Chess, who liked the innovation of the guitarist and his experiences with Country music. On May 21, 1955, the debut single "Maybellene" of Chuck was released thanks to the cooperation of these two gifted people. This single was replicated by millions of copies and also took the first place in the American charts. The song took fifth place in the "The Billboard Hot 100 " (the national hit parade of the United States) the same year.

He composed and performed hits that were sung by all America. Thus, fans heard the singles that became classics of the genre, for example, "Brown Eyed Handsome Man", "Rock and Roll Music", "Sweet Little Sixteen", "Johnny B. Goode". D. By the way, one of Berry's early hits, «Roll Over Beethoven ", was performed by The Beatles at the beginning of their creative career.

Chuck Berry is a professional musician and a poet at the same time: he came up with all his texts, putting in them a piece of his biography and philosophical meaning. For example, the lyrics of the song "Johnny B. Goode " describes the life of the village boy Johnny B. Goode, who was born in Louisiana. He could not write and read but wanted to become famous with the guitar. Some critics agree that Berry is not like Johnny B. Goode: these guys love music but, unlike the song character, Chuck managed to graduate from college and get a diploma.

The song "Sweet Little Sixteen" tells the story of the experiences of a 16-year-old girl. Chuck was one of the first artists, who understood teenagers. Berry managed to release 20 albums and 51 singles during his long career. The black performer had crowds of fans at his concerts and Chuck was the inventor of the "duck walk."

According to rumors, the guy always demanded a royalty of $ 2000 for his performances, in spite of the duration of the concert and the number of the public. Chuck put his fee in a case from the guitar and took in a taxi at the end of his work. When the artist stopped flashing on the stage, his hits were performed by representatives of such musicians as The Beatles, The Rolling Stones, and The Kinks.

But The Beach Boys used the melody of the song "Sweet Little Sixteen," without mentioning the name of the real author and John Lennon was the author of the song "Come Together," which, according to experts, was similar to one of Chuck`s songs.

The artist was accused of plagiarism more than once. In 2000, his former partner Johnnie Johnson said that Berry stole his hits, which belonged to him. However, he didn't say anything when he was asked why he remembered about his copyright after so many years. Therefore, the court did not consider it necessary to deal with this dark case and dismissed Johnson`s lawsuit.

In the autumn of 1948, Chuck Berry married Themetta ‘Toddy’ Suggs. She accepted his proposal, not for profit. They had their beautiful daughter Darlin Ingrid Berry two years after their wedding. But the man had a lot of affairs and was not an exemplary family man: according to rumors, the musician had an intimate relationship with a minor girl, it caused a scandal in 1959.

According to the guitarist Carl Perkins, who often went on tour with the artist, Berry was replaced after prison: he liked to light in the dressing rooms before jail but he was known as a cold and aloof person after prison. His friends often used to say that the black artist has a complex character but his fans remember him as a smiling and radiant performer.

An example of Chuck's complicated character is the case that occurred in 1981. Keith Richards waited for the musician after the concert. The young man went to him with hugs, when he saw him but the guitarist of The Rolling Stones got a bruise instead of an autograph. Berry hit his fan, believing that there was an annoying fan in front of him. The star one of the creators of "The Rolling Stones" remembered this meeting for a lifetime. The musician has a lot of ironic and controversial issues in his biography.

The cloakroom attendant worked in one of Chuck Berry`s clubs, who was engaged in prostitution. The star was fined 5 thousand dollars and sentenced to 5 years in prison. The famous guitarist was amnestied ahead of schedule three years later. And in 1979, he was again in prison.

But that's not all. In 1990, a bag of light drugs was found in his house, as well as several employees, who worked in a private club of Berry, the 64-year-old artist was accused of voyeurism. According to the girls, Chuck installed cameras in the ladies ' room and collected these tapes. The victims forgot about the sexual deviation of the star and decided not to bring this case to court after the musician paid them compensation (about $1.2 million).

The artist told his fans that he was going to release a new album "Chuck" on his 90th anniversary in 2017. But in March 2017, the great performer died late at night in his home in Missouri. Chuck Berry had a net worth of $10 million.

Such famous artists as Ringo Starr, Mick Jagger, Bruce Springsteen and others expressed condolences on the death of the founder of classic rock and roll and the creator of the new.