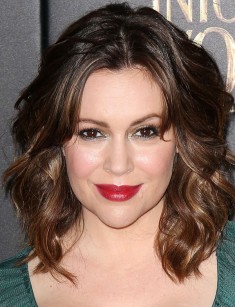 Alyssa Milano is one of the successful American actresses of the TV series of the nineties. She has achieved success due to her role as a witch girl in the series Charmed. The spectators have remembered her as the most naive of Halliwell sisters or by her part of Samantha Micelli in the famous sitcom Who's the Boss?. The films with her participation gain the huge love of the spectators till present. Her latest works which were a role in the TV series The Handmaid's Tale and the series Mistresses prove that.

The American actress Alyssa Jayne Milano was born in Brooklyn on the 19th of December, 1972 in the unusual Italian-American family. It’s known that since early childhood the future actress was surrounded by the creative surroundings: her mother Lin Milano was a fashion designer, and her father Thomas was a musical editor and a well-known yachtsman.

Alyssa spent all her childhood in Staten Island where together with her brother Cory they were congregants of the local Catholic church. After the girl’s first progress in cinematography, all her family moved to Hollywood. Here Alyssa studied at Californian Buckley School.

Since her early childhood, the future star of the Charmed series already knew for sure that she would become an actress. For the first time, she had had this idea on her mind when she was watching the famous Broadway hit – the play Annie. Already at the age of eight, Alyssa had her debut in the role of July (an orphan girl) from Tony's Reward, and in a year she already appeared in the performance Jane Eyre and a small play Tender Offer.

Milano received her first serious role at the age of eleven. She had the luck to perform the role of Samantha Micelli in the sitcom Who’s the Boss?. This story tells about the single father who had to find a job as a housekeeper at the wealthy representative of the advertising industry. This movie soon gained the love of the audience and brought Alyssa popularity. The girl was regularly invited to take part in the film and different series, but it was only for small episodic roles.

In the same period, the girl began to be engaged in the developing of her music career. Since 1989, she has recorded five musical albums. In general, her albums have been sold in one million copies. Her latest album has become platinum. To attract the public's interest to the aspiring singer in Japan (where Milano has recorded all her musical albums), they showed the movie under the title Commando - in which Alyssa took part together with Arnold Schwarzenegger a couple of years before.

The young years of the actress are saturated with various controversial rumors connected with her participation in a couple of pictures which got under the category of "18 plus" (Deadly Sins, Embrace of the Vampire, Poison Ivy II). Moreover, during this period there appeared gossips about different frank shootings with the participation of the young girl. This story came to an end with the fact that in 1998 Alyssa seized at the little-known web designer more than $230,000 as he published her frank pictures on his web resource.

Milano’s career began to take off after her participation in the series Melrose Place and Spin City. The role of Phoebe Halliwell - the youngest of three witches in the TV Charmed, has brought the actress great popularity. Alyssa’s work on this project has brought her later two nominations for Best Television Actress according to Teen Choice Awards.

It’s noteworthy that after the finish of the shootings of Charmed the girls stayed friends in real life. Together with Holly Marie Combs (Piper Halliwell), Milano released the lingerie line. And Alyssa got a chance to appear in the series under the title My name is Earl after Jaime Pressly who had played a role of the mermaid in one the Charmed episodes invited her to take part in it.

Since 2013 till 2014 the actress performed in the TV series under the title Mistresses where she played the role of Savannah Davies. Though, after two successful seasons of the series she had to leave the project because of her daughter's birth.

In 2017 there appeared the information that CBS planned to shoot a remake of Charmed. Perhaps, the audience could see the regular cast again. Moreover, in 2017 Alyssa began to appear in public with her growing-up daughter. In such a way we can predict that the actress will soon return to her work.

Alyssa’s private life has been discussed in the press for a long time. Periodically the girl was said to have relations with Justin Timberlake, Scott Wolf, Kirk Cameron, Julian McMahon and Brian Krause.

Brian Krause and Milano publicly denied all gossips about their love affair for several times, but the press motivated by the growth of popularity of the TV series Charmed kept following and pursuing them. These rumors didn't stop even when the actress got married to Cinjun Tate – the member of Remy Zero band on the 1st of January, 1999. This marriage came to an end a couple of years later.

Already on the 15th of August, 2009 after the three-year love affair Milano got married for the second time. David Bugliari - the sports agent of Creative Artists Agency, became her husband. Two years later the actress gave birth to their son – Milo Thomas Bugliari. In 2014 it became known that the couple was expecting for the birth of their second child. On the 4th of September, 2014 Alyssa gave birth to their daughter who was called Elizabella Dylan Bugliari. The actress regularly posts the photos of her children with her husband and their favorite pets on her Instagram.

The actress doesn't hesitate to publish rather frank pictures where she gets pleasure and admirers the process of breastfeeding. Alyssa confesses that she is ready to sacrifice her figure for the sake of her daughter’s health. If there is a need, she will breastfeed her child for a couple of years.

At present Alyssa Milano continues to take part in a couple of charity projects of PETA and UNICEF. She brings up her children and recently she has begun to attend the New York fashion parades with her growing-up Elizabella. Moreover, the actress appears on the radio and takes part in the PR actions.

In the interview to the People magazine, Alyssa Milano confessed that she wanted to give birth to more children. She highlights that she is aware of her age and understands the possible risks connected with the child's birth. That’s why the actress for the first time expressed her ideas and thoughts about the adoption.

Besides her acting job, Alyssa Milano is fond of photography. Milano dedicates a considerable part of her spare time to her three dogs and cats, thirteen birds and eight horses. The girl repeatedly told that she supported vegetarianism. She takes part in the creation of the videos which appeal for the refusal of the use of meat products.

Milano is a trendsetter: her hairstyle, make-up, and colorings are regularly discussed by the young European and American fashion experts. At the same time, Alyssa doesn't find it essential to keep her growth (157 cm) and weight (45 kg) in secret. She appears in public without hesitation with her husband even being pregnant. Moreover, the actress’s age is not a secret for her fans as well.

The baseball has become one more Alyssa's exciting hobby. The actress supports the Los Angeles Dodgers. Alyssa Milano enjoys the game so much that each year she pursues a continuous season ticket for all the games of the League. It’s noteworthy that the symbolics of the baseball clubs repeatedly appeared in Alyssa’s women clothing line which she releases since 2007.

The actress is an ambassador of The global organization on neglected tropical diseases. She has donated more than $250,000 to this organization. Milano works on the improvement of the information literacy of the people using the mass media which tells about the misery of more than one million people living in the tropical zones.

Alyssa is a Goodwill Ambassador of The United Nations Children's Fund on behalf of the United States of America. Within her program, she visited India and Angola. In the autumn of 2004, the girl started a campaign with the assistance of UNICEF. She has donated more than $50,000 for the women and children of South Africa who have had the AIDS disease. She managed to raise funds due to the sale of her photos.

Alyssa became the owner of the whole collection of the tattoos which have many times been noticed in the various series. On her body, she has the following tattoos - a fairy kneeling in the thick grass, beads and a heart. Moreover, she has an angel with a cross and her husband's initials, a flower garland, a snake who eats his tail, an Indian symbol "OM" and Chinese hieroglyphs on her hands and wrists. 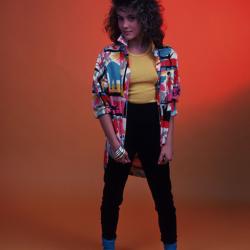