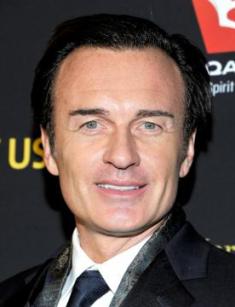 The only person in the world who perfectly mastered the "magic" accent, actor and producer Julian McMahon, has broken women's hearts not only on television but also in real life. The sexy and handsome man with sensual eyes became the favorite actor of female viewers around the world.

Julian Dana William McMahon was born on July 27, 1968, in Sydney, the unique and attractive city which boasts a lot of historical sights.

His father, Sir William McMahon (former Prime Minister) and mother Sonia were highly respected people and had a significant influence in the elite circles of Australia. Although Julian is not the only child in the family (he has an older sister, Melinda, and a younger sister, Deborah), the future actor was not left to his own devices.

The parents kept a wary eye of the three children’s activities, preventing them from sloping around. So, McMahon Jr. was sent to a private school for boys at the age of 7.

Julian and the parents had different views on his future. The young man dreamed of becoming a long-distance trucker, but his father and mother wanted their son to become a topnotch lawyer. Therefore, after graduation from high school, the young man succumbed to the persuasion of William and Sonia and entered the University of Sydney to study law.

There he quickly became famous as heartbreaker but not as a diligent student. The captain of the rowing crew and the brilliant forward was incredibly popular with girls.

One year later, the young seducer realized that he was not interested in law. While soul searching, the sex symbol entered the University of Wollongong to study economics, but the handsome man also lost interest in his studies there.

Although the son of the former Prime Minister of Australia had a lot of opportunities, the future actor did not enjoy privileges and achieved everything he wanted.

Julian left the university, but he did not sit around doing nothing for a long time. The owner of the advertising company noticed the athletic, tall man with perfect body measurements (his height is 6.2 ft. (189 cm), and the weight is 163.14 lbs. (74 kg)) at a cafe in Australia. He offered McMahon to participate in fashion shows.

This proposal caused a mixed reaction at home. The mother said that if the son accepted the offer, her heart would be broken. The father was not against, having considered the son’s new hobby to be a whim. In spite of the mother’s prohibition, Julian decided to try his hand at modeling business, and his choice was right.

Three years later, he began traveling around the world, walking on the runways in America (Los Angeles, New York City) and Europe (Milan, Rome, and Paris). The young man easily conquered the fashion world and, at the age of 19, became the most in-demand European fashion model, and at the age of 21, he became the face of Levi’s.

Thanks to Levi's commercials, McMahon often appeared on television. It allowed him to gain popularity in his homeland quickly.

The attractive young man was noticed and in 1981 offered the leading role in the soap opera Dynasty. He worked on this project for 18 months, and then began to play in the TV series Home and Away (1988), which became his television debut. By the way, this project was a springboard for many famous actors: Liam Hemsworth, Dominic Purcell, Jason Clarke.

Inspired by people's closer attention, Julian moved to conquer Hollywood in 1991. There, the young man got rid of the Australian accent and began to play bit parts in TV series. The actor does not like to recall this period because minor roles are not something to be proud of.

Then, McMahon had a brief hiatus, but in 1992, he already caused a stir. The promising actor was cast in the role of Ian Rain in the drama series Another World. In 1997 he starred in the film Magenta, but the movie did not attract viewers. In 2000, Aaron Spelling invited Julian to the TV series Charmed.

McMahon increased the army of his fans, starring in the fantasy series Charmed. It is noteworthy that the producers offered roles only to famous stars. So, if Julian had not been popular enough at that time, he would not have been invited to the series.

On October 7, 1998, the first episode of the project Charmed was released. The plot of the film is simple and non-trivial, telling about three beautiful sisters that possess unique magical powers. One of them can freeze people and objects in time, the second one can move objects with her mind, and the third woman sees into the future. The sisters swear to use their abilities for good and fight a desperate battle with the evil forces.

Julian appeared in the third season as Cole Turner, a seductive Assistant District Attorney, immediately winning the love of female viewers of the TV series. The producers did not reinvent the wheel and used the traditional method when the antagonist turned into a protagonist. For one season, Cole is torn between the dark and light side but chooses the good one in the name of love. Turner has got rid of the demonic essence and become a mortal being.

Officially, the actor signed a one-season contract. However, when the attractive dark-haired man appeared in the project, it became one of the highest rated series. So, they decided to continue cooperation. The charming demon was cast for the fourth and fifth seasons. However, McMahon left the series in the middle of the fifth season. The reason was not disclosed.

It is believed that Julian became world-famous starring in Charmed, but it is known that in the USA, the TV series Nip/Tuck (2003) made the seductive man a TV star, earning him a Golden Globe nomination for Best Lead Actor in a Television Series – Drama in 2005.

In 2005, McMahon participated in the large-scale Hollywood film project for the first time. In the film adaptation of the comic book "Fantastic Four," the actor played the role of the villain Dr. Doom. The film was a box office success, and Julian proved himself to be an outstanding actor and appeared in the 2007 sequel Fantastic Four: Rise of the Silver Surfer to the joy of his fans.

The same year, the heartbreaker and Sandra Bullock starred in the thriller Premonition. According to Julian, it is his most successful role. In 2010, Julian appeared in the comedy action movie RED. In 2011, the films Faces in the Crowd and Bait with his participation were also released.

Nowadays, the Australian actor's filmography includes more than 30 diverse roles. Fans hope that this number will only grow every year.

In 1999, McMahon married the American model, Brooke Burns. A year later, the couple had a daughter, Madison. However, in 2001, this marriage broke up.

While filming in the TV series Charmed, the actor started a new short relationship. In the story, McMahon’s hero had a torrid love affair with Alyssa Milano’s heroine. Fans believed that on-screen love would turn into a real relationship. However, despite numerous rumors, the celebrities did not date and were just colleagues on the set.

The eminent heartbreaker dated Milano’s implacable rival, “witch” Shannen Doherty. Rumor has it that he started the romantic relationship with "the girl from Beverly Hills, 90210" on the set of the movie Another Day. At that time, Julian was married to Brooke Burns and denied everything. Later, the young people enjoyed their relationship and did not fear conviction.

The love did not last long. On January 7, 2002, Shannen Doherty married producer and gambler Rick Salomon. The news of the wedding shocked the couple’s fans. It was a bolt from the blue. The reason for Julian and Doherty’s breakup is still unknown.

In 2014, the star of the series Charmed and Nip/Tuck said goodbye to bachelor life. After 11 years of relationship, the actor married Kelly Paniagua. The marriage ceremony took place at the picturesque Lake Tahoe.

In 2017, Kelly and Julian are still together. Fans think that their favorite actor has found family happiness.

It is not known whether McMahon has an Instagram page or not. Judging by the photographs and videos on social media, it is evident that cinema is not the only passion in the life of Julian.

In his free time, Julian surfs, rides a motorcycle, attends baseball matches with his wife, and loves to cook. The charismatic actor loves life in all its forms, and it loves him back.

Julian McMahon has a net worth of $16 million.