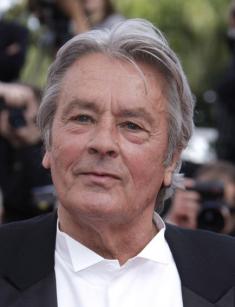 Alain Delon is a screen sex symbol and the ideal man of the 1960s to 1980s, a French theater and film actor, director, producer, and screenwriter. Alain Delon won the César Award and was made Chevalier (Knight) of the Légion d'honneur.

Alain Fabien Maurice Marcel Delon was born in the small town of Sceaux, an upscale suburb of Paris, but spent his childhood in Bourg-la-Reine. The father of the future actor, Fabien Delon, owned a cinema theatre. His mother, Édith Arnold, was a professional pharmacist but worked as a ticket collector in a family business. When Alain was three years old, the boy's parents broke up.

One year later, Édith married the owner of Paul Boulogne, a famous butcher shop in the city. The mother began to help her new husband at work again, and she had no time for her son at all. As a result, she hired the nurse, Madame Nero, and 4-year-old Alain was sent to live with the foster family. Alain lived with them until their tragic death.

During his school years, the boy distinguished himself with an indomitable temper, a large number of pranks, and reluctance to do his homework. The boy was expelled from several schools for poor progress and unruly behavior. Then Alain became a professional butcher and began working at a butcher shop.

At the age of 17, Delon had the opportunity to change his life for the better and enlisted in the French army. Delon served as a fusilier marin in Indo-China. The army tempered the future actor’s character, and Alain became a little more responsible and disciplined. After army discharge in 1956, Alain went to Paris, got a job as a waiter, started showing his photos to producers and participating in auditions.

Famous American talent scouts Harry Wilson, who worked with James Dean, paid attention to the young man and offered Delon to move to Hollywood. But at the last moment, popular director Yves Allégret persuaded the actor to start a career in the French cinema.

Delon began his acting career in 1957. Alain Delon made his debut in the film Send a Woman When the Devil Fails which was followed by the similar bit part in Be Beautiful But Shut Up. These movies did not bring much success to the actor. The next few films, Christine, Women are Weak, Way of Youth, also did not make him famous.

The tall actor (5.80 ft. (177 cm)) had a balanced figure and the regular attractive features. Delon who had such body measurements became an in-demand actor, but he received clichéd minor roles of frivolous languid, handsome men time and again. Subsequently, the actor’s appearance was considered the men's standards of beauty, but at the beginning of his career, the handsome face only hampered Delon's popularity.

Critics and viewers finally praised the actor in 1960 after the release of the detective film Purple Noon. After this success, Alain Delon moved to Italy and starred in several popular movies: the sports drama Rocco and His Brothers, the melodrama Eclipse, the epic film The Leopard. In these films, the actor could show off and bring his dramatic talent to light. It is noteworthy that Delon, who did not have professional acting education, later became a model for drama schools.

In the 1960s, Delon could influence his career development and changed the role of a handsome suffering man for comedy characters. Delon's role of Julian in The Black Tulip, as well as of Ulysse Cecconato in the comedy The Joy of Living, was very well welcomed by viewers. The film Any Number Can Win, starring Delon and Jean Gabin, was nominated for the Golden Globe Award.

After this movie, the actor was invited to Hollywood. But the participation of the famous European star in American films does not always meet expectations. The projects, Once a Thief, Lost Command, Is Paris Burning?, Texas Across the River, were not a success. But when he returned home, his first leading role in the French film The Samurai became a classic.

In 1969, the actor starred in another famous French film, the detective movie The Swimming Pool, directed by Jacques Deray. Delon played writer Jean-Paul, who killed a friend in a fit of rage and tried to hide the murder from the police. Romy Schneider played the writer’s girlfriend, Marianne. Moreover, Delon had a relationship with the actress, but they had dated long before the shooting of The Swimming Pool.

In the 1970s and 1980s, the actor participated in a large number of films that differed from each other in terms of quality and degree of popularity. He appeared in box-office flops such as Scorpio and The Passage, as well as in successful projects: Zorro, The Concorde ... Airport '79, Let Sleeping Cops Lie. The actor also took part in the sensational USSR-France-Switzerland detective story Teheran 43, in which he played the role of police inspector Georges Foche. But the actor’s most outstanding work of this period is the role of alcoholic Robert Avranches in the drama Our Story, for which Delon won the Best Actor César Award.

At that time, the actor enjoyed worldwide popularity. His name became almost a household word. The song in honor of Alain Delon was released even in the USSR. The rock band Nautilus Pompilius recorded the composition “The Glance from the Screen," mentioning the actor’s name in the first line. The French actor became a symbol of good living and the beautiful western world. The phrase “Alain Delon Doesn’t Drink Cologne” has become an aphorism in the Russian-speaking society.

The next decade brought the actor two prominent roles. Alain Delon played the protagonist in the 1992 film The Return of Casanova and collaborated with Jean-Paul Belmondo and Vanessa Paradis in the 1998 crime comedy Une chance sur deux.

In the 2000s, Delon did not appear on the screen for a long time. Only in 2008, the actor played the role of Julius Caesar in the comedy Asterix at the Olympic Games, based on the French comic books.

Alain Delon has not only acting talent but also a beautiful baritone voice. For the first time, the actor appeared as a singer in 1967, performing the lyrical song "Laetitia." The composition became a soundtrack to the film The Last Adventure.

After five years, singer Dalida and Delon recorded the cover of "Paroles ... Paroles ...", which had been previously performed by Alberto Lupo and Mina. It was the new version that became a worldwide hit, and the name of the composition, which translates as “Words, Words ...”, became a French set expression.

In the 1980s, the actor recorded three songs. In 1983, he collaborated with Shirley Bassey on “Thought I'd ring you”; in 1985, the man recorded the duet "I Don't Know" with Phyllis Nelson and a solo song “Comme au cinema” in 1987. The last two songs were quite popular.

Alain Delon's first love was a young Austrian actress, Romy Schneider, whom the actor met on the set of the film Christine. They got engaged in 1959 and then dated for six years. But the celebrities did not marry.

The actor also had a brief fling with actress and singer Christa Päffgen, known by her stage name Nico. In 1962, the singer gave birth to the son, Christian Aaron. Delon did not acknowledge paternity, although the boy was raised mostly by Delon's parents, who gave the grandson their own surname.

For the first time, he married actress and director Nathalie Barthélemy in 1984. The couple had a son, Anthony, who also became an actor. This marriage lasted only four years, then Alain divorced his wife. Anthony has a daughter, Alyson Le Borges. Alain Delon’s granddaughter became a famous model and signed a contract with the lingerie brand, Intimissimi.

In 1968, Alain Delon met actress Mireille Darc on the set of the film Jeff. They did not get married but lived in a common-law marriage. It was the longest relationship in the life of the actor. Alain and Mireille lived together for 15 years and stayed friends after the breakup.

The next relationship was long-lasting again. In 1987, Delon began to live with the Dutch model, Rosalie van Breemen. Rosalie gave birth to two children: daughter Anouchka and son Alain-Fabien Delon. After ten years, Alain and Rosalie broke up. Now, the actor leads a bachelor’s life.

Delon had a long career break. The actor did not appear in movies for five years.

In 2017, the actor told the press that he was going to quit his acting career. Delon explained this decision saying that he preferred the theater, where there was direct contact between actors and audience. Alain will play a farewell role in the film about unequal relationships directed by the French filmmaker, Patrice Leconte. Delon has got a leading role in the drama, and Oscar-winning actress Juliette Binoche will be his partner on the set.

Alain Delon will continue to perform on the stage of the Théâtre des Bouffes-Parisiens, where the actor has played for six years and appeared in the production with his daughter Anouchka more than once.

Alain Delon has a net worth of $245 million.