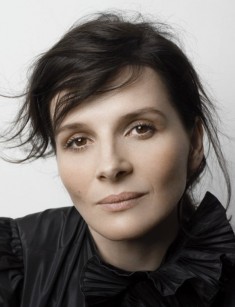 Juliette Binoche is a French theater and movie actress who has won the Oscar Awards in the nomination for Best Supporting Actress ( The English Patient) in 1997 and the award of the Cannes Film Festival for Best Female Role (Certified Copy) in 2010.

Juliette was born on the 9th of March, 1964 in Paris. The girl's father, Jean-Marie Binoche, was engaged in the sculpture and directing in the puppet theater. Her mother, Monique Stalens, worked as an actress and a teacher of the French language. The family of her mother endured the tragedy during the Second World War: most of Monique’s relatives, including her parents, died in the furnaces of Auschwitz.

Besides the Poles and the French, among the ancestors, Juliette had Brazilian, Moroccan and Fleming roots. Juliette has a sister Marion who has also chosen the job of the actress. Even though their parents divorced in 1968, Juliette has had the interest in the painting for the rest of her life. Her father has imparted the future actress the love to the art.

The creative atmosphere at home has influenced Juliette's choice of her future life path. At the age of fifteen, the girl was enrolled in the school of the acting skills. Here two years later she staged the absurdist play written by Eugène Ionesco Exit The King. At the same time, she acted as the main character. In 1982 Juliette entered the National Academy of Dramatic Arts. She didn’t leave her studies and began to work both in the theater and movies.

Juliette Binoche began to take part in the movies at the age of nineteen. The actress received her first roles which were supporting characters in the art pictures Liberty Belle, The Chicks, Le Meilleur de la vie. In 1985 the aspiring actress participated in the creation of the movie- parable Hail Mary. This movie narrates the events before Christ's birth in a modern manner.

After a range of the passing pictures - Family Life, Farewell Blaireau, Rendez-vous – in 1986 the young actress received the major role in the project under the title The Night Is Young directed by Leos Karax. A year later the movie won the major award of Berlin Film Festival.

In 1988 there was released the new picture in the movie theaters. This drama was a screen version of the novel The Unbearable Lightness of Being by the French writer Milan Kundera. In this movie, Juliette performed the role of Tereza, the young wife of the leading character Tomas. A year later the movie awarded four prizes at European film festivals. Moreover, it was nominated for Academic Awards and Golden Globe Awards.

In 1990 the director Leos Karax began to work on the most high-budget movie ($28 million) during all history of the French cinematography under the title The Lovers on the Bridge. The director invited Juliette Binoche and Denis Lavant to perform the principal roles. After the failure of this movie in the hire Juliette stopped working with the director on the next projects.

In 1992 the actress enriched her filmography with two pictures at the same time. Both of these pictures have brought huge success to the young actress. It’s about the screen adaptation of Emily Brontë's novel Wuthering Heights. In this picture, the French actress has performed together with her British colleague Ralph Fiennes. Later there was released the love drama Damage in which another Englishman - Jeremy Irons became Binoche's partner on the movie set.

The actress received César award in 1993 for her work in the major role in the musical movie Three Colours: Blue directed by the Polish director Krzysztof Kieślowski. This movie narrates the destiny of the composer’s widow who managed to finish the incomplete works of her spouse. In 1995 there came out the adventure melodrama The Horseman on the Roof directed by Jean-Paul Rappeneau. Juliette Binoche and Olivier Martinez appeared as the characters of two young lovers in this picture.

The role in the Hollywood drama The English Patient directed by Anthony Minghella has become good luck in the creative career of the French actress. In 1996 for the embodiment of the character of the nurse Hana Binoche received the Academic Awards, BAFTA Awards and also awards from the European Film Academy and Berlin festival. In the world hire the picture has earned $230 million. In 2000 after the work on the significant role in the movie Chocolate directed by Lasse Hallström in which Juliette was shooting together with the Hollywood actor Johnny Depp, the French actress was nominated for Academic Awards. Unfortunately, she hasn’t received the award.

In 2002 the comedy Jet Lag directed by Danièle Thompson featuring Juliette Binoche and Jean Reno came out in the world hire. The picture has earned $7 million to its creators. In the second half of 2000, the actress continues experimenting with her appearance and style. Juliette appears in the independent picture Hidden, political drama A Few Days in September, melodrama Paris, I love you and thriller The Invasion.

In 2010 the Iranian director Abbas Kiarostami offered Juliette Binoche to take part in the existential picture under the title Certified Copy. The actress has awarded the prize of Cannes Film Festival in the nomination for Best Female Actress for her role of the owner of the art gallery. In 2011 the movie star accepted to take part in the juicy film Elles of the Polish director Małgoska Szumowska. The same year Juliette participated in the American fighter The Son of No One together with the Hollywood stars Al Pacino and Katie Holmes. In the world hire the movie has earned $1,3 million.

During two years the actress appeared in the comedy Another Woman's Life, in the drama An Open Heart, in the biographic movie Camille Claudel 1915, in the melodrama Words and Pictures. In 2014 at the 67th Cannes Film Festival there was premiered the drama Clouds of Sils Maria directed by Olivier Assayas. In this movie, the leading roles were performed by Juliette Binoche and Kristen Stewart – the star of the movie Twilight. In 2015 the actress together with Antonio Banderas participated in the South-American project under the title The 33 based on the real events which took place on the coal mine.

Juliette Binoche has never been married even though she has had numerous proposals from her admirers. In the late eighties, the young actress had a love affair with the director Leos Karax whose feelings have come to an end in a short time. In 1992 Juliette Binoche began to have relations with the scuba diving master André Halle. In 1993 Juliette gave birth to her firstborn Raphaël from André Halle.

During the shootings of the movie Children of the Century Binoche got acquainted with Benoît Magimel. They had a passionate love affair not only on the screen. In 1999 Juliette became a mother for the second time – she gave birth to her daughter Hana. Binoche hasn't married any fathers of her children. She prefers living with her son and daughter in privacy in the suburbs of Paris and being engaged in her favorite activities. Due to this, she looks young and happy.

In 2016 there were released two movies with the participation of Binoche. It was a screen version of the novel Polina written by Bastien Vivès about life and formation of the young ballerina. Also, there was released the comedy Slack Bay which was included in the program of the Cannes Film Festival.

In March 2017 there was premiered the comedy Baby Bumps telling the story about the mother and the daughter who have become pregnant at the same.

At present, the movie Ghost in the Shell directed by Rupert Sanders is displayed in the movie theaters. This movie was shot in the cyberpunk genre. Except for Juliette Binoche, Scarlett Johansson, Pilou Asbæk, Michael Pitt performed the leading roles of this fantastic movie. 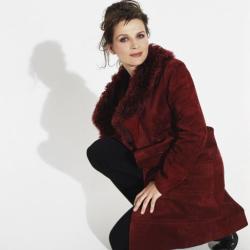